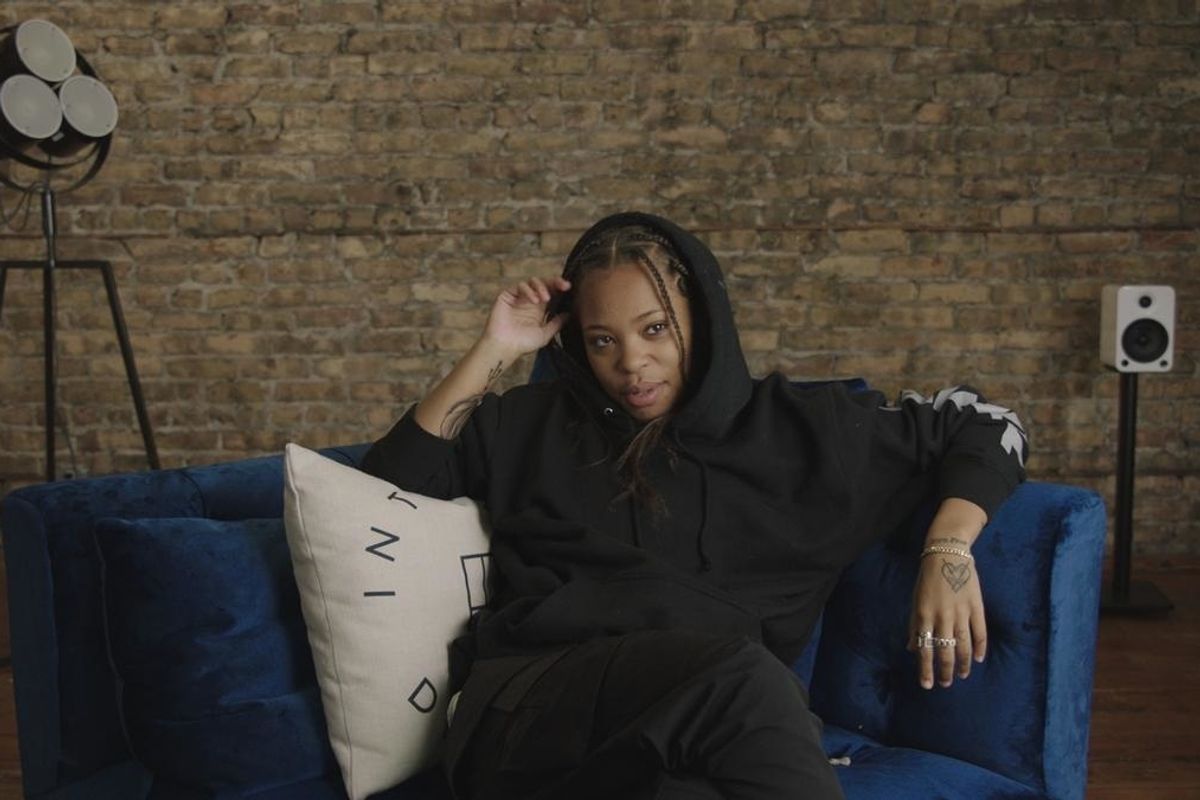 Kodie Shane is emanating boundless energy when she comes into the PAPER office, making her team crack up with constant jokes and filling each space she enters with the type of infectious energy only a young artist just hitting her stride can radiate. At just 19, Shane is not only preternaturally comfortable in her own skin, displaying none of the self-consciousness most teenagers — even famous ones — have at least a bit of, but seemingly fearless regarding her art and place in music.

Hailing from Atlanta, Shane's personal history is inextricably intertwined with the music industry. Her father was part of a 1980s Detroit R&B group, and her sister was a member of the early 2000s girl trio Blaque; Shane herself was discovered two years ago by the Atlanta record manager credited with guiding the careers of Gucci Mane, Migos and Young Jeezy, Coach K (Kevin Lee). She linked up with Lil Yachty's Sailing Team, which served as a platform for Shane's budding career. After releasing "Crown Me," a high-energy, boastful track similar to her current work (like "Flex On Me") at 15, she dropped "Sad" in 2016, an insightful song promoting the message that it's okay to feel down.

Now gearing up to release her new album (which Shane has yet to reveal the name for but includes WondaGurl-produced tracks and a Trippie Redd feature), she created an intimate 25-minute documentary with Red Bull that explores her convention-shattering world — and her life and career as a young rapper who's "queer as fuck and proud of it." See the documentary and read our conversation with Shane below to get to know this promising new artist:

You started making music so young, and you've already put out so much. How has your process changed over time?

When I was younger I used to write because that's all I knew. My mom used to have a studio, so I'd write on sticky notes and stick them on the wall instead of actually writing. But now I feel like when I can sit down and actually write, it's so time-consuming when I could just go and record one line and then the next. So now I more mentally write than actually write. That process is a little different but I've never had a set process. I'm really big on energies and moments so the best song might come to me at 3AM.

You're very open about being queer and being unapologetic in yourself. Have you always felt that way?

I feel like I'm starting to realize, by reading a lot of what my fans are saying, how much of a role model I really am and how much they look up to me for just being myself. I feel like I'm telling their story for them. Me being myself makes them want to be themselves. It's never been like, "Oh, I'm out the closet now!" I've always been out and been who I am. There was one point where I was in gym one day my freshman year of high school, and I looked at my friend and was like, "Yo, I think I like girls." And she was like, "Oh, that's cool." That was the first time I said it out loud. I never got really shamed for it. I don't think my dad all the way liked it. He might think I'll still pop up with a guy one day. It's a dad thing I think.

What's one thing about the industry that's really surprised you?

One thing I didn't realize was how hard touring is on your body. And also the boys. I'm in a very male-dominated industry. They either like me or they're intimidated and they just try to stay away. I run with the boys, I feel like I can rap just the same or better so I feel like they don't know how to handle it. I'm cool with a lot of artists, but for me it's hard to find people to collaborate with because I'm so sensitive with my music. It's my baby; it's all I really have that's all mine. I just don't like to put anyone on my songs. If I want a feature, I want it to take it to the super next level or not at all.

How do you stay so grounded?

Not having so many people around me. I think that was a problem for me in the past — having so many people taking energy from me and not giving it back. Now I just surround myself with people that give me energy back. I used to have a lot of friends. I'm the kind of friend where if we went to dinner, I'm like, "I got it ya'll," like I'm just that friend. If I care about you, I'm going to take care of you. But I don't have a lot of those type of friends. I kind of fell out with a bunch of my friends and it all happened at once, but I'm good. I feel like I don't need too many people around me.

You're also kind of moving all over the place right now as your career starts to pop off.

I've been traveling so much in general. Even if it's not a tour I'll but doing different shows. It's hard on your body, and that's what people on the outside looking in don't realize. It's also harder for me because I stopped eating meat; I can't do the fast food or hit a Subway. But I love traveling. One of my favorite things is to be able to go and see so many different people in all different places.

Where are some places you've gone this year?

I did Rolling Loud in Miami; I did a two-day show with Billie Eilish in Cleveland and Indianapolis. I was supposed to do the Breakout Fest in Vancouver but I missed my show, which actually made me cry real tears.

I was deliriously tired so I left my passport and I couldn't get there. Everyone keeps telling me that it happens, which makes me feel better that I'm not the only one. I also went to South Africa and Berlin, and Chicago with Red Bull.

Chicago is always one of my favorite places to perform; it's like my second home. The energy was crazy! At the time, this was one of the largest audiences I had played in front of and being direct support to Kehlani was surreal. She's not only a good friend of mine, but someone I've looked up to for quite some time. I love her music and her stage show is just bananas.

How did the documentary come about?

The Red Bull team is just so creative and fun to work with. This started out being a piece that I was a part of that I think included two or three other artists. Once we started working together, everything was just so organic that somehow the Red Bull team decided to make my portion of the piece a stand-alone type of docu-story. I believe that's how it came about. Either way, I was excited to create the piece because very few people realize how long I've been working at music, where I come from, and what music means to me.

It means so much for me. I'm so attached to it and like, married to it! I've working on it for so long. It just shows me being older and showing my musical growth. I'm about to be 20 this year, and it's flying by. All the people that listened to my older music will see the growth and where it has potential to grow.