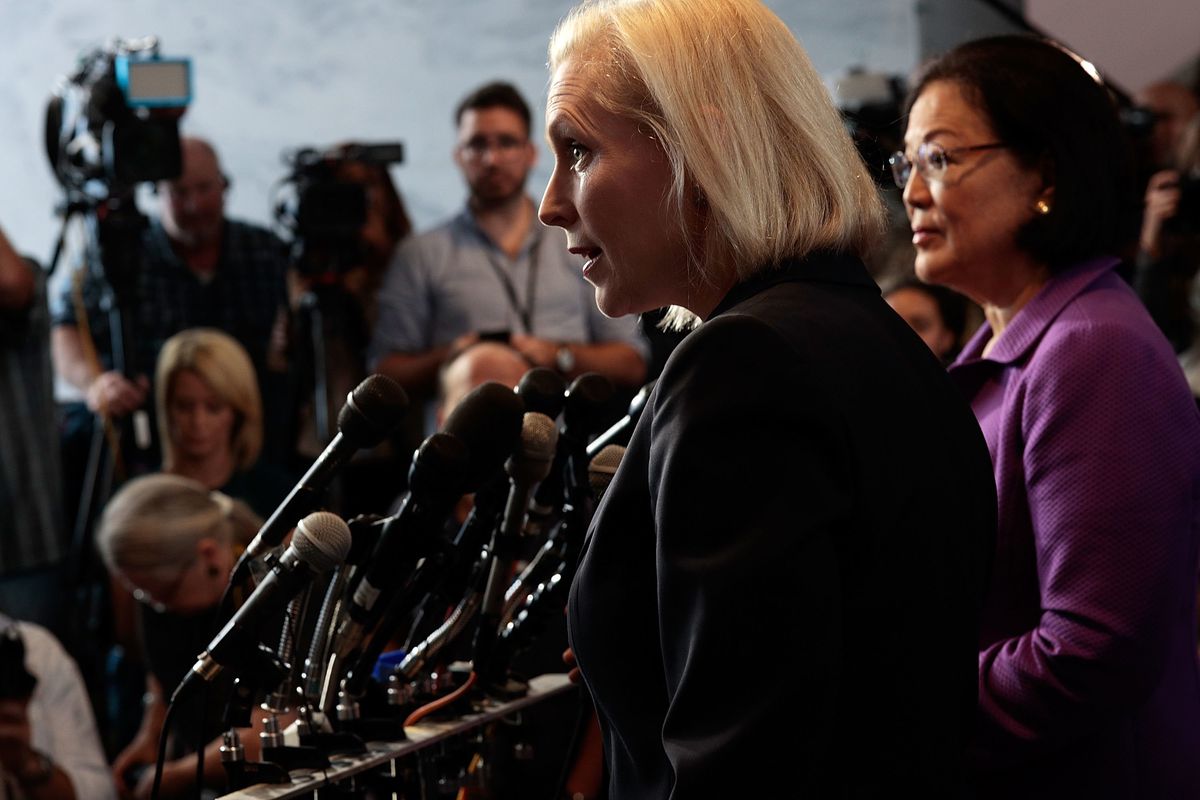 Kirsten Gillibrand: 'We Are Saying That Women Are Worth Less Than A Man's Promotion'

With more dignity and poise than any woman could be expected to have in the situation—as Kavanaugh claims the mysteriously well-corroborated allegations against him are "from the Twilight Zone," Trump insists that he is "an unfairly maligned" "gem," and the GOP frantically digs up rapidly crumbling evidence to support the judge's good character—New York senator Kirsten Gillibrand delivered a poignant but scathing rebuke of the treatment of Kavanaugh's ongoing nomination.

Addressing the Senate floor, she argued for the rippling social consequences of Republicans' refusal to believe or take seriously the chilling accusations against Kavanaugh.

Begging Congress to take seriously the stakes of appointing a sexual abuser, she asked for common sense: "I want to take a step back for a second, and look at the big picture of what's actually going on with this nomination. We have a nominee for a lifetime appointment to the highest court in the land, who has been accused credibly of sexual assault."

She continued: "This process is sending the worst possible message to girls—and boys—everywhere. It's telling American women that your voice doesn't matter. It's telling survivors everywhere that your experiences don't count, they're not important and they are not to be believed. We are saying that women are worth less than a man's promotion."

Referencing Clarence Thomas's confirmation hearings, she implored: "That's not how the world is in 2018 and we cannot allow this Senate, this body, to bring us back to before 1991."

In response to those arguing that Kavanaugh is entitled to due process, and that the accusations must be proven beyond a reasonable doubt to affect his nomination, Gillibrand argues that in fact, that they do not and asks that Congress keep that in mind as the Judge and his accuser testify tomorrow:

"...those are the standards for a trial. Those are the standards in criminal justice. We are not having a trial, this is not a court. He's not entitled to those because we are not actually seeking to convict him or put him in jail. We are seeking the truth, we are seeking facts, we are seeking just what happened. We, senators, not staff-members, not female lawyers, we Senators are being asked to assess he honesty. Is he an honest person. Is he trustworthy. Can we trust him to do the right thing for decades? Rule on women's lives for decades to come? Can we trust him to do that right?

"If we allow women's experiences of sexual trauma to be second to a man's promotion, it will not only diminish this watershed moment of societal change we are in; it will bring shame on this body and on the court."

Watch the full speech below: