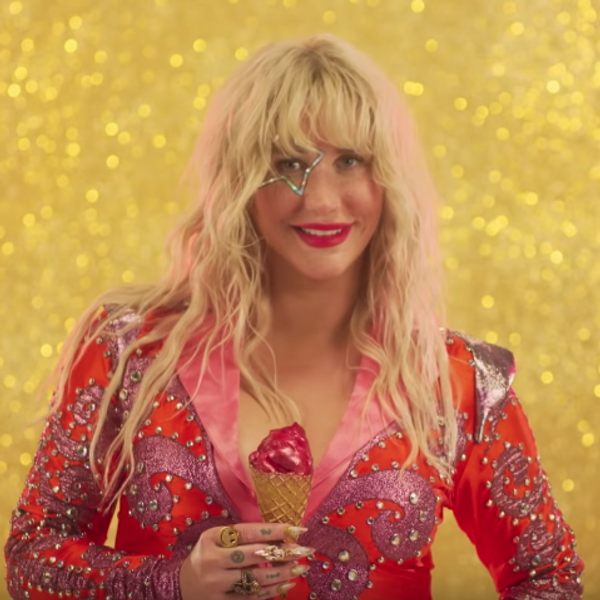 From her KISS-esque beauty looks, to her writing collab with Alice Cooper, to her dedication of her debut album Animal as an homage to her idols the Beastie Boys' Licensed to Ill, Kesha has always made clear her appreciation for rock and roll debauchery. Now, she's putting her Big Rock Energy to good use. The pop queen has lent her vocals and vibes to British rockers The Struts to revamp their flirty, glam rock-indebted single "Body Talks" in a brand new video and version of the track, out today.

In the glittery, semi-psychedelic video, Kesha embraces all the flare and lusty bravado of glam rock. She flirts with Struts lead singer Luke Spiller using a bedazzled banana as a phone, slides a glittery ice cream cone down her jumpsuit, licks a metallic skull, and dances around serving Ziggy Stardust-meets Elvis looks. Her potent, throaty vocals bring the already raucous track to a new level of swagger.

Related | Kesha's 'Rainbow' Documentary Is a Poetic Look Into Her Life

Kesha, "a long time fan" of The Struts, joined the band to shoot the video in St. Louis where they overlapped for a tour stop. "Body Talks" was directed by Lagan Sebert, who is also the director of Rainbow - The Film, Kesha's recently released behind-the-scenes documentary about the making of her 2017 album Rainbow, which will probably make you cry.

"I'm so excited to release 'Body Talks' with The Struts!!!," says Kesha. "They are one of my favorite current bands keeping the spirit of classic rock and roll alive with their wild energy and sexy style. It's a song made for my favorite activity: boogieing."

Do as Kesha commands, and boogie to "Body Talks," below.