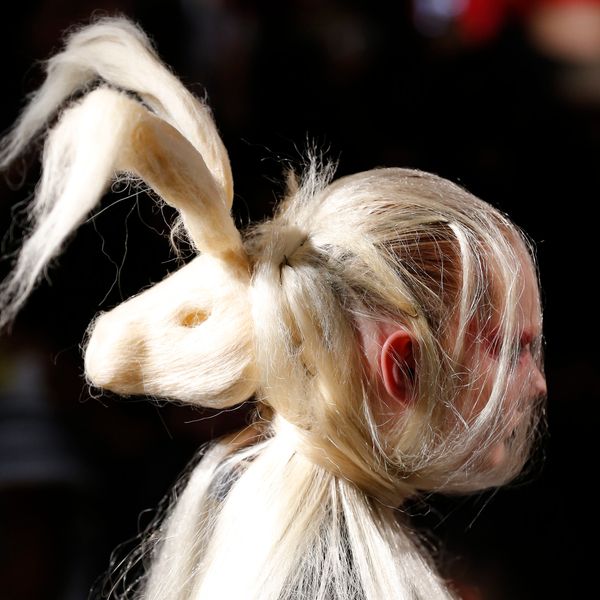 Animal Heads Are the Strangest Hair Trend From NYFW

Walking into a Kaimin show is an experience. The New York-based designer, whose futuristic and high-tech designs draw inspiration from underground street culture, has cultivated its own cult following along with working with celebrities such as Björk, Lady Gaga, Nicki Minaj and Katy Perry, among others.

It was evident why the brand continues to inspire intrigue during its Spring 2020 show earlier this week as models emerged wearing punk-y gothic looks, including crumpled low-rise bottoms crafted from sustainable fabrics and bracelets with extra long fringes hanging from the wrists.

The dominant theme for the night was mutation, that translated most visibly into the highly conceptualized hair looks for the night.

In true goth fashion, long locks of hair were used to conceal the face, while the rest was morphed to resemble faces of different animals like bears, rabbits, and coyotes. The talent behind this unusual but inventive look was hairstylist Franco Gobbi, who got the idea from London-based performance arts group, Mutoid Waste Company. But instead of using plastic, both the stylist and the designer stayed true to their core message of sustainability and created the looks using only eco-friendly materials.

Gobbi chose animals to reflect the theme of mutation, given the growing concerns around wild life extinction today. "Two primary looks were thought of for the show to showcase the central idea of creating animalistic hairstyles," Gabbo tells PAPER, explaining how he put the complex creations together. "First look involved very sharp cornrows, a middle parting with wispy hair around the face, while visualizing an owl. Second look was a super long hair falling down and wrapped around the neck creating a harpy eagle. From there, I decided to bring in other animals including a bear, rabbit and coyote, that was mounted on the back of the head."

Interestingly, as complicated as that sounds, Gobbi who collaborated with hair brand, ANTI Collective for the show, says he did not use a lot of hair product. "We didn't really use too many products besides a hair glue spray for the art animal pieces, the cornrows and wig wrap and a styling spray. I just sort of started creating a solid base on a dummy then went on to wrap the hair, followed by the hairspray on top of a plaster skull of the animals made out of paper like taxidermy. On the models, we made a wig wrap to have a solid clean base where we mounted hair extensions and animals on top."