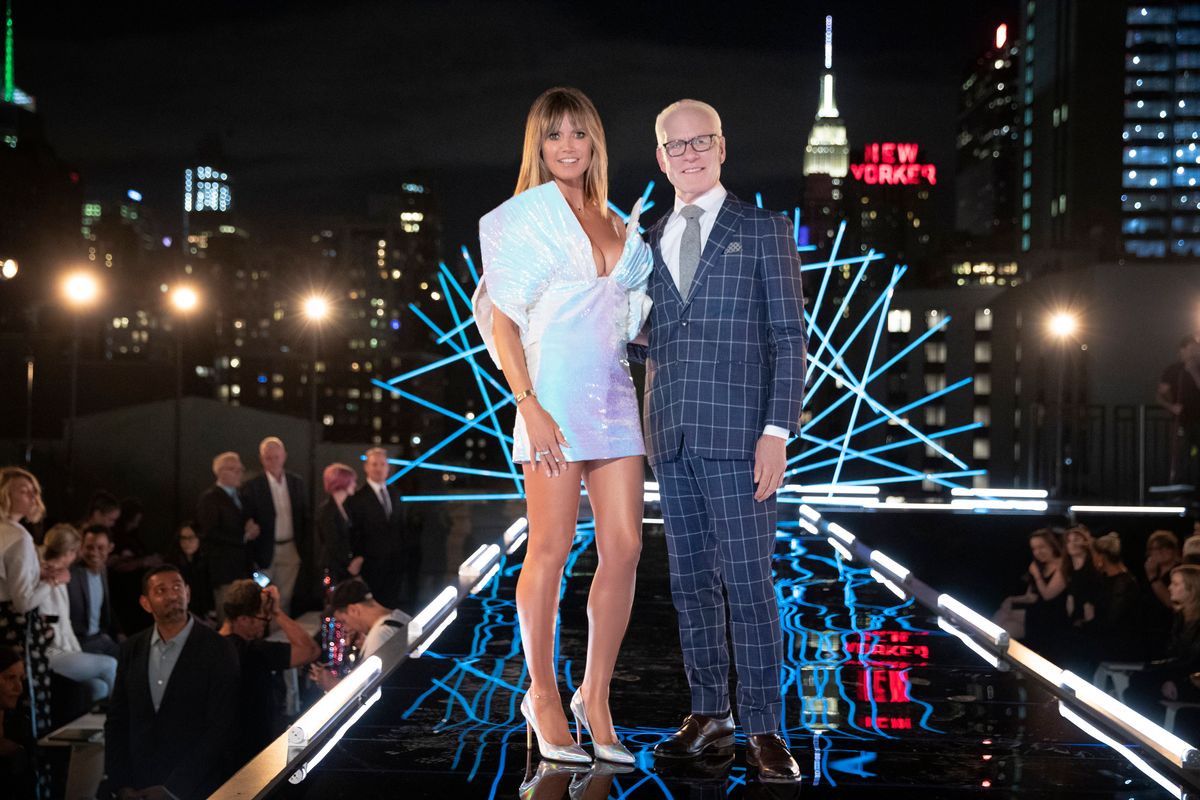 In the first few episodes of Making the Cut, Amazon's first original fashion competition series that began streaming in March, two front runners were seen by many as the early favorites to win the title: Esther, 43, the Berlin-based designer who won right away won back-to-back challenges; and Sander Bos, 24, the charismatic young talent from Belgium who wowed the judges with his conceptual and avant-garde creations.

But instead it was Jonny Cota, the 35-year-old streetwear designer from LA, who walked away with $1 million and a 1-year mentorship with the Amazon fashion team. After a few slow starts where he was criticized for relying too much on his signatures like the leather jacket, he managed to expand his design vocabulary and introduce some softer elements while remaining true to his DNA.

He stood out from the rest for his ability to craft a strong narrative and lifestyle around his brand, skills that became evident after he had to creative direct his own campaign and stage his very own pop-up. His business savvy and sustainable approach to design also no doubt helped him seal the deal thanks to his years of experience helming his brand SKINGRAFT and working closely with his factories in Bali.

Cota had also shown several times at New York Fashion Week and has dressed celebrities like Nicki Minaj and Beyoncé, to name a few. But since the final episode aired last month, he's now able to reach a wider audience than ever before thanks to his exclusive "Jonny Cota Studio" collection for Amazon, with many pieces selling out consistently on the e-commerce platform's fashion store.

The Making the Cut winner caught up with PAPER to talk about life after the show, his circus-performing past, his thoughts on the state of the fashion industry (and why he thinks the future is digital), and what's next for his brand.

So what's it like to finally have everyone know you're the winner?

I'm over the moon! To be honest, this happened last summer and I have been holding in this really intense secret that sometimes I thought was a dream. Like, "Did it really happen?" I was watching the final verdict and I was like, "Oh my god, are they going to say my name?"

What has the journey for your brand been like prior to entering the show?

I launched it in 2005, so it's 15 years. And the first two years were just custom costumes for circus performers and then that turned into a ready-to-wear collection that I would sell at festivals. I would sell from the trunk of my car — I was hu-stle-ing. That turned into a reasonable wholesale business for showrooms, and so we've been at it 15 years. We've opened stores, we've closed stores, we've launched e-comm, we've closed e-comm. It's been a long journey of pivoting, reading the market and doing what was right for us.

I know the show touched on your circus performance past a little bit. Can you speak to how that came about?

I was very involved with late dance night culture since I was 14, going to raves and all these different parties. It's an eclectic group of people [laughs], so I got into performance art. As soon as I graduated university, my best friends who run this circus performance called me out and said, "We're going on tour for two months. Jump on the bus! We'll teach you how to fire dance and you're DJ'ing tomorrow night so be ready." And the rest is history.

Since the show wrapped up last year, have you already been working with Amazon closely with the mentorship?

Yeah, the mentorship has been very incredible. It started right after we wrapped filming, and it's weekly checking on everything we need, all the guidance we need to take my little niche brand and prepare it for a massive launch on Amazon Fashion. The last week, we were checking in 10 times a day, getting ready to launch the online store.

It's a lot of guidance that we really needed to evolve our imagery, evolve our product descriptions, evolve our site's chart. I always make crazy leather jackets for a very niche market in a very small size range, and that's not going to fly on Amazon because they have a very large appeal. So, they really held my hand, bringing me into the mainstream market and teaching me how to be a better seller.

What is the status with SKINGRAFT?

For five years I've been planning to launch Jonny Cota and I knew the show would be the perfect opportunity. So, moving forward, the majority of my energy will go into all things Jonny Cota. "Jonny Cota Studio" is an exclusive collection that just launched with Amazon, and Jonny Cota, well that's me, I have a lot of aspirations about what I'm going to do as a designer. SKINGRAFT, I was actually planning on wrapping it up, but it's gotten this huge momentum from the show. So much new energy, so many new fans, so I think that we will figure out a way to do both.

So you're allowed to do your own thing with your name?

Yeah. Amazon wanted the collection we did together to be only with them and I'm thrilled with that. So that's why we made that "Jonny Cota Studio." We didn't want to hamper my ambitions as a designer. Jonny Cota is for you to do whatever you please.

As far as your other aspirations, do you see runways in New York or Europe in your future? I know you've shown in New York before, but do you see yourself as trying to work with the establishment in some way?

I do feel like the fashion industry establishment has been crumbling slowly over the past few years. I've done New York Fashion Week for years, it's been the highlight of my life. I love it, but it's not what it used to be. It doesn't inspire me as much anymore. We're being presented right now with this exceptionally ironic opportunity, with COVID and this opportunity to do things digitally, and it is laying the groundwork for how I want to launch this brand forward. I think I would probably trade in Fashion Week runway shows for incredible online interactive video experiences in the collection. I feel like the future is digital and I want to really jump headfirst in that.

Speaking of COVID, how has that affected you and your business?

COVID has affected us tremendously. From a manufacturing standpoint, we have the majority of our team working at home. We rented a moving truck and delivered the sewing machines to everyone's homes and we delivered the materials to them and they did their part, and delivered it back to us. It has been a huge challenge, but I think we've successfully pivoted really well and kind of made it work. Last time, we launched the best collection of my life on Amazon and it was two months of pivoting and struggle but we figured it out.

You started out with a niche positioning in the market. How big do you really want to get?

I aspire to be a household thing without losing my identity and my DNA and my edge. However, I've been doing fashion for 15 years. I love it. It drives me daily, but I am ready for more. I'm ready for more now that I'm inspired, now that I'm in my mid-thirties. What excites me is shifting and I want to focus more on a lifestyle brand. Lifestyle brand, lifestyle products, home goods, collaborating with established brands. Nike, Adidas, something like this. I'm still thrilled by design, but my vision for Jonny Cota is not to create a fashion house that has been seen so many times before. It's about creating a brand that's larger than that.

Are there any brands or designers that you look up to or admire?

I've always loved Marc Jacobs and I actually love Marc Jacobs even more now. One, I love his design, I love his approach, but what I love the most is his social media experience where he daily dresses in other designers, tags them and calls them out. He's in the front row in the last few seasons supporting other designers. Just like, being a lover of fashion and being egoless about promoting other designers up. This is how I've always kind of felt. Like, ok we can all rise together, there's no competition. So I looked at him often as inspiration as how to lift others up around you and celebrate fashion, celebrate design.

Since the show first aired, obviously your profile has gotten bigger. Can you tell me what sort of feedback or reactions you've gotten from the general public interested in your work?

The response has been overwhelmingly positive. I didn't anticipate so many people from all over the world but specifically the Midwest writing saying, "Hey, my son is 12 years old and we're a Catholic family and we saw you on TV discussing being a gay man, a husband and a fashion designer but coming from a Catholic past and respecting that, not running away from it but also coming into your own as an adult."

It seemed like Making the Cut's contestants were very genuinely happy for each other, and they became close. Have you kept in contact with anyone since the show aired?

Yes, we have a group chat that we all kind of chime into a few times a week. But Esther and I, we message back and forth regularly. Rinat, her and I, send daily text messages. So those two are my main girls from the show, but we're all close. If we were not in a COVID situation right now, we would be instigating a reunion because we are all excited to see each other again.

What are you most excited about in the future now that you won and everything's out there publicly?

I know the answer I'm supposed to be saying is my new collection, which I am really excited about, but what I'm actually excited about is the opportunity for new beginnings and a new rebrand. I love everything I've done for 15 years, but this weekend I just launched a whole new label, and with that comes a blank canvas that I can explore with anything I want. I feel the inspiration just pouring out of my eyeballs. I'm so excited to get ready to work and continue to build this new brand.