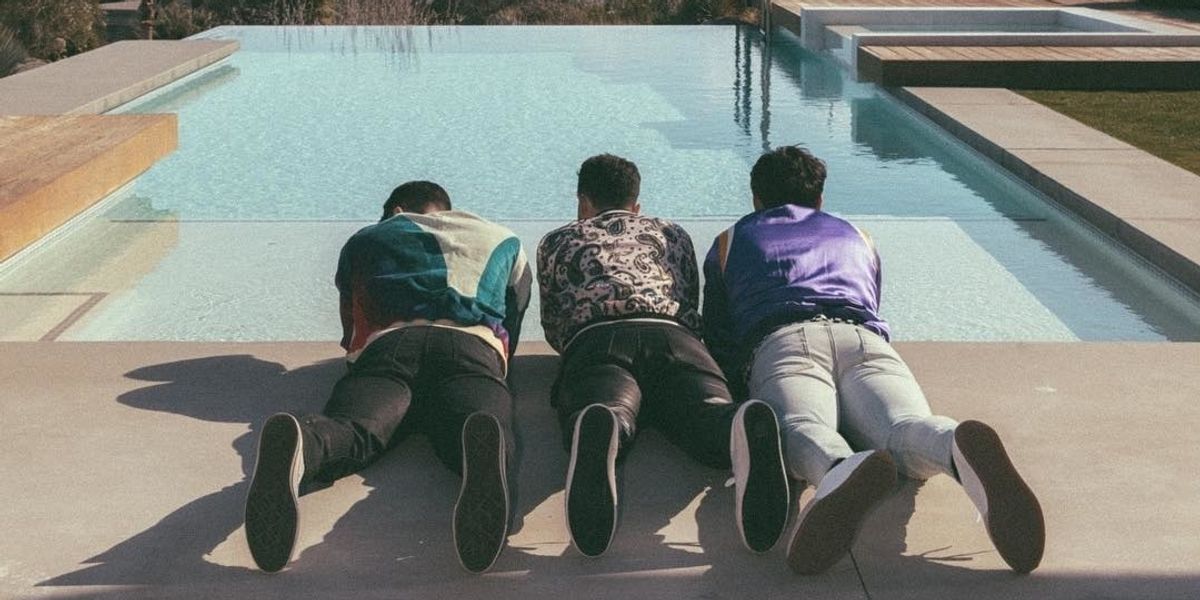 Can You Correctly Identify the Asses on the Jonas Brothers' Album Cover?

It's official. After announcing their extremely fun reunion, dropping a couple new bops, scoring an SNL gig and convincing the world obsessed with them again after six years broken up, The Jonas Brothers have announced a new album.

Their fifth studio album and first in 10 years is titled Happiness Begins, and is out June 7. Aw! The brothers do seem genuinely pretty happy these days, enjoying their pleasantly resilient mid-career wealth and fame — especially now that they're all shacked up, deflowered and chilled out enough to collaborate again.

Very chilled out: it's been all PDA with their betrotheds, cute brotherly content, and big dad vibes (Hawaiian shirts, listening to Kacey Musgraves, cigars on yachts, hitting up random college parties) lately for Nick, Joe and Kevin.

So chilled out. In the Urban Outfitters-worthy, Instamatic album art, the brothers sprawl by the pool looking out at the palm-treed LA hills. No doubt, the photog snapped away while they reflected on how much older and wiser they are than when they first arrived in this crazy town, chuckling about all the good times they've had and all the shit they've seen. Fanfic dialogue: "Hakuna matata, boys. We've made it. And I'm so glad we did it together" sighs Joe. Here's a question though, which one is Joe?

The brothers' enjoyable, denim-covered butts feature prominently on the cover. But it's a puzzle to match each faceless ass to the right JoBro. Based on concert photos and their past album covers, Joe used to take the middle spot for performances, but as of late, their photos reveal a consistently rotating middle bro. Cheaply, they did tag themselves in the pic, but true fans will test their knowledge and take on the #JoBrosButt challenge.

Here's what we have to work with: over the last 10 years, little baby Nick became a hulking, underwear model beefcake and the largest brother in mass. Additionally, at this point... probably only Kevin would pair paisley with such shiny pants? The purple workout jacket and light-wash jeans also somehow feel very Joe in light of his festival-ish electro-pop project DNCE. Finally, putting the least famous and beloved Kevin in the middle is a tactful solution to the classic boy band power struggle between Nick and Joe over who is the real frontman.

Though the slouchy pose makes their builds hard to scope out, it appears that the Jonas on the left is the biggest. Indeed, the correct order is Nick, Kevin, Joe. Well played, JoBros. Did you get it right?

The Jonas Brothers last album was 2009's Lines, Vines and Trying Times: their moody, rock album grappling with the state of the world (Nick told Rolling Stone: "Lines are something that someone feeds you, whether it's good or bad. Vines are the things that get in the way of the path that you're on, and trying times — well, obviously we're younger guys, but we're aware of what's going on in the world and we're trying to bring some light to it").

On the decade-old album cover, Joe scored the middle spot, in between a skinny-scarfed Kevin, and plaid-adorned Nick. The main single was called "Paranoid," their hair was big and struggle was in their eyes. Not a cheerful, relaxed, lounging ass in sight.

How times change: Happiness Begins will apparently be all about its eponymous emotion. According to a little intro video, the Jonas Brothers promise the new album will bring us "all the joy and happiness you bring us every day."

Jonas Brothers on Instagram: “#HappinessBegins June 7th. So proud of this new record and we can’t wait for you guys to have these songs!!”