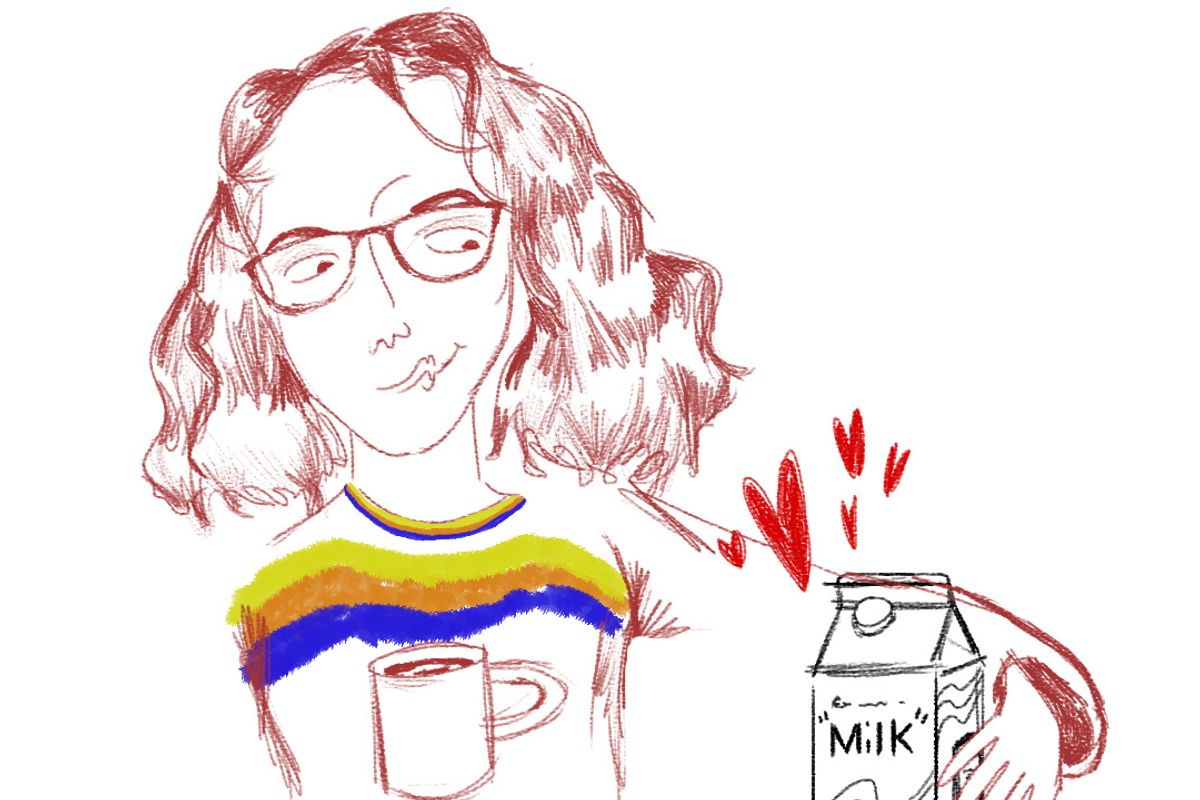 Maybe you've seen Jo Firestone on HBO's High Maintenance. Or maybe it was on Hulu's Shrill. Or maybe you remember her from many memorable, scene-stealing appearances on The Tonight Show Starring Jimmy Fallon. But if you've seen her — or, better yet, heard her — you know.

The Brooklyn-based comic grabs your attention with her distinct voice, a midwestern-inflected, girlish quiver that complements her guileless, "gee willikers"-type stage persona. In some of Firestone's best bits, these qualities first lull the audience into assumptions about what they're about to hear before the comic upends expectations to maximum effect with Rabelaisian stories about hook-ups and butts (as seen in a Comedy Central set aptly titled "Jo Firestone Explains How Sex Works") or hilarious anecdotes like one from Shrill in which Firestone's character tells Aidy Bryant about how her ex-boyfriend became... her stepdad.

Along with roles on TV, Firestone has written for Joe Pera Talks with You (where she also appears in the cast), Fallon and National Lampoon Radio Hour. Currently one of the three hosts of Brooklyn's Butterboy live show alongside Maeve Higgins and Aparna Nancherla (it normally happens Monday nights at Littlefield but has since moved online), you can also catch Firestone on two podcasts: Everyday Decisions and Dr. Gameshow.

Reluctantly, I wake up. The dog wakes up too. I don't know if he's already been awake for hours, but whatever the case may be, he's good at seeming like he just happens to wake up when I do. probably part of his long term plan to eat me.

I brush my teeth, put on my mask and take the dog for a walk. I figure this is gonna be a short one because dog hates to walk in the morning. Same, doggie, same.

Dog does a poop. This is huge, not the poop but the fact that he poops. Dog doesn't bark at anyone on the street. A victory all in all.

I play with dog until he's tired. He still hasn't mastered "fetch" so I just throw toys in different directions around the apartment and he runs after all of them.

Dog starts to drag his toys into the kitchen. This means he wants food and water. I oblige. We are down to the last of his "calming" supplements I got online a few months ago. I can't imagine they do anything, but as I pour the dredges of the container into his food bowl, I begin to fear what tomorrow will look like.

See a tick in the bathroom. File it under "think about this in bed at night."

Make coffee. I didn't have milk for a couple days so I've been drinking coffee black, which I've realized is not for me. A friend told me creatives and psychopaths drink black coffee, and that I should get used to it if I'm going to be a creative psychopath. Last night I bought milk. Love milk.

Check email. Emails are more of a rare occurrence these days but today I got one from a friend who's sharing playlists. This is a nice email to get.

Listen to Up First. It's the NPR news podcast that gives you news in 15 minute installments. I find myself lying down and covering my eyes 7 minutes into the podcast. I guess it feels better to know what's happening than not know.

Teach Comedy Workshop over Zoom. This class started off in-person for senior citizens at Greenwich House, but 3 weeks into the class, we're under lockdown, and now we do it over Zoom. This week's assignment was to write "thank you notes" in the style of Jimmy Fallon. One of the attendees, Bill, figures out a way to play the piano music off of YouTube as everyone reads their jokes. The rest of the class vetoes this because it is determined "distracting." Bill stops playing the music from YouTube. I think Bill's instincts were right on target. We do an activity where we try to pitch the worst TV shows of all time. Most of the shows we brainstorm are some combination of nudity, Donald Trump, and Covid-19.

Have big plans to make a breakfast burrito. Something goes wrong in execution. Now it's breakfast calzone.

Look at what i've got to do today. I'm a non-essential, and the days pass by quickly. Hoping to do an exercise video (won't), work on a writing assignment (should), call some family members once I'm in a better mood (might). A couple days ago I was really surly on the phone, but it might've been partly because I was thirsty. Planning to hydrate and make some nicer calls.

Tonight is Butterboy, a weekly (now digital) standup show I co-host with Maeve Higgins and Aparna Nancherla over Zoom. Thinking i should shower for it.

Dog takes nap. I wash what feels like 3000 dishes.

I gear up to take dog out again. Barks at three people. Because they look at him. Because he's a cute dog.

Eat cheese and then graham crackers and then clementines and then handful of Starbursts. Remember to drink water for the first time today. Must be partly why I've been surly yet again.

Dog gets dinner. It's like he hasn't eaten in years. This dog food must be like a Nicolas Cage film in the year 2000 because it's "gone in 60 seconds." I take dog out again. No barks, yes poops. Nice one, doggie.

Sign onto Zoom for Butterboy. It's nice to see familiar faces - Donwill, our producer Marianne Ways, Ben Leonard, Josh Simon. Comedians trickle in. It's certainly strange, but the jokes are great, and it's fun to peak inside comedians' homes. Tonight's line-up is really funny -- Sam Morrill, Jackie Kashian, Leah Bonnema, Pooja Reddy, Phoebe Robinson, Jon Glaser. Dog barks throughout show but everyone is nice about it. Glaser shows us his dinner, which is fried rice. Mmm. I think of nothing else for the rest of the show. Fried rice shall be my dinner, too.

I make fried rice as quickly as possible. It tastes okay, mostly because it is hot. I sit with my boyfriend as he watches a TV show that is apparently the Bachelor for musicians. In the show they go on a date to a closed Guitar Center. I don't understand.

Mom texts me. She loved Butterboy. Thanks Ma!

Work on writing assignment some more. Take a break to look at quokkas. My friend Ashley sent me a reddit link a few days ago. I've bookmarked it. Such little happy guys! I can't seem to figure out if they have more than one tooth each.

Get on a Zoom call with some friends. Meant to be just a fun call but we end up talking about vaccines and the future of our industry. Whoops. Still, it's nice to hear their voices and see their faces, and I like seeing their homes, too.

Boyfriend takes dog out for last walk of the night. I am alone in the house. It's so quiet and amazing.

We watch an episode of Younger and go to bed. Boyfriend actually "oohs" when he sees the drone-shot interstitials of the city skyline.

Trying not to think about tick, I think about family. Wished I lived closer to home. Dog gets closer and begins to snore. Grateful for his dumb noises. Probably part of his grand plan to eat me. I am okay with it.