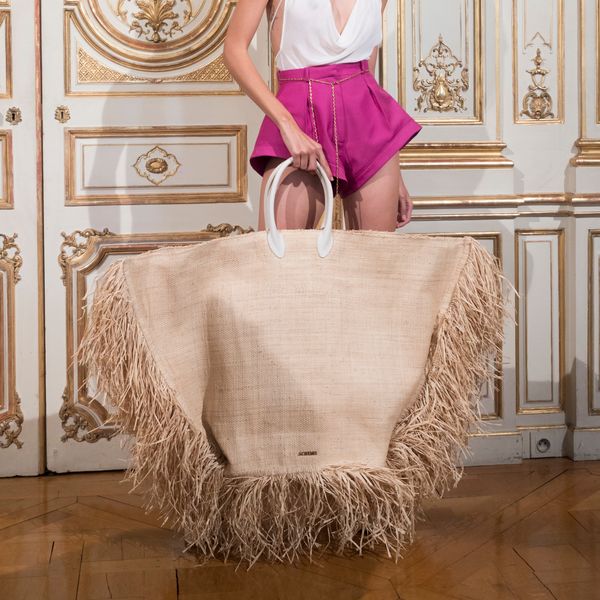 Jacquemus has become famous for his oversized straw sun hats, which have been worn by everyone from Gigi Hadid to PAPER cover star Emily Ratajkowski. It was the statement piece of the summer, briefly became a point of contention with Diet Prada, and seemed unable to be topped — until now. As the designer just showed his spring 2019 collection, the collection has given us yet another oversized straw accessory. This time, though, it's by way of a giant beach bag.

On the Paris runway just this afternoon, Jacquemus showed a lineup of flowing dresses, short shorts, tie-front blouses, and the like. And on the arm of a number of models was a beach-ready straw bag that you could probably fit more than one said models comfortably inside. You could even perhaps add one of last season's giant hats while you're at it.

Ironically enough, for the models who were not given the opportunity to walk the outdoor runway with a gigantic woven tote on their arm, the rest were given tiny structured satchels that were so small they might not fit your new iPhone, let alone a wallet. One for day and one for night, though, if Jacquemus has anything to say about it.

It seems as though, while we've only just ushered in the first official day of fall, we already have quite the season of oversized accessories to start saving up for. The good news is, with this particular one, you'll have plenty of room to carry around all of those other summertime must-haves you've had your eyes on too.