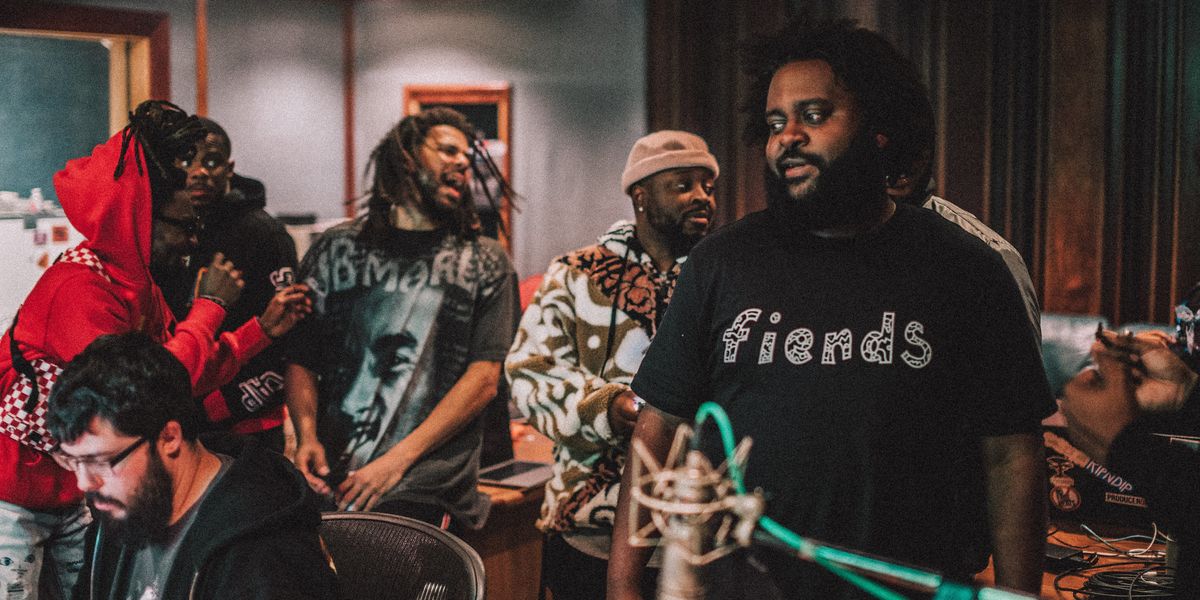 Over the last few years, J. Cole has been quietly building a musical dynasty. The first major indication of Cole's plot for musical dominance revealed itself in 2014, when he, along with his business partner and manager, Ibrahim Hamad, launched the label Dreamville Records. That same year, Dreamville released Revenge of the Dreamers I, a collaborative hip-hop album featuring Cole and the label's first signees, rappers Bas and Omen. A few months later, with the assistance of three new Dreamville artists, singer Ari Lennox, and rappers Cozz and Lute, Revenge of the Dreamers II debuted. Now, with two additional acts on its roster, rapper J.I.D and rap duo EarthGang, Dreamville seems to be plotting a full-fledged musical takeover, armed with an impressive roster of young creatives producing generation-defining music.

Revenge of the Dreamers III, the third installment of the popular collaborative series, is the world's first proper introduction to the Dreamville Records of the future. Prior to its release, the album received plenty of buzz on the internet after news broke that it was recorded over a ten-day intensive collaboration binge at Atlanta's Tree Sound Studios. "The best part about recording ROTD III was the energy and humbleness of everybody," said J.I.D during a phone interview with PAPER. "It was just a good experience as far as being a musician. Stuff like that doesn't happen to that capacity. So many different artists came through from all walks of life and different places and stripped their pride to just work together." Some of the artists who stopped by to contribute to the album or just absorb the creative energy were T.I., Ludacris, Rick Ross, No I.D., Mike Will Made It, Vince Staples, Masego, and Breezy.

Many of the artists who attended the recording sessions at Tree Sound Studios described it as a life-changing and truly one-of-a-kind experience. In REVENGE, the 30-minute documentary that captured the recording process, artists are seen scrambling from room to room looking to lay verses, produce beats, and collaborate with whomever was present. It was simultaneously a competitive environment and a friendly one. "Ain't nobody in my opinion has been in that type of environment, where it was just literally different artists from all over," said Cozz. "You hop in the room, if you like the song and you like the vibe you go in there and create with whoever is in that room. It could be Ludacris or whoever. If you vibe with what's going on in the room, boom you make a song. It was really hectic, but it was different. It was probably the best time I've ever had in my life."

The ROTD III sessions represented a shift in the label's previous approach to producing music. Although Dreamville's artists are known for constantly collaborating, the 10-day session was actually the first time all eight Dreamville artists were gathered in the same place together. Because of busy touring schedules and living situations, the artists had previously resorted to the new age way of collaborating, sending verses back and forth via email, and notes over text. This was also the first time that Dreamville allowed outside musicians to penetrate its close-knit circle and contribute freely. "I think we've been so in-house as a crew, and it's not that we don't like people," said Bas. "We've just been busy and we've been building everything from the ground up and going on tour and linking back up and trying to make more music. This is the first time where the process was really opened up to include so many talented artists and producers."

The years of Dreamville maintaining a tight in-house creative circle helped to develop a strong family dynamic within the label. All of the artists, despite them living on opposite sides of the country, have formed bonds that translate well on songs like ROTD III's "Down Bad" and "Costa Rica". The constant encouragement and positive energy that they deliver to one another has also had a high impact on their individual endeavours. "I feel really blessed to be at Dreamville because it's such a family oriented thing," said Omen. "Everyone is focused on a common goal, which is to make the best possible music and we really care about the culture. Just to be surrounded by like-minded people who are trying to be creative and push the envelope, but still carry on tradition in a sense and be innovative."

J. Cole's role as founder and executive at Dreamville Records has been instrumental to the label's success. As a musician himself, he's attempted to create a formula that can nurture the creativity of his artists while simultaneously fueling their professional and personal growth. Touring has been one of the key elements of the label and its artist success. Not only has touring provided great exposure to the artists, it has also helped address the tough financial hurdles that many artists face during the infancy of their careers. Touring has also helped them learn how best to meet the high demand of delivering quality product to global audiences while still staying true to their artistry. "Dreamville allows you to be who you are come as you are, and I fuck with that," said Lute.

The industry politics and life lessons that Cole has picked up over the years has also aided in his ability to successfully guide his artists. Each artist had their own fond memories of the moments they spent with Cole discussing everything from music to their family life. One common subject that he always appears to emphasize in his talks is the importance of hardwork. "Overall he works hard," said Cozz. "He works like he's not J. Cole. He's always like, 'Yo work your ass off no matter where you're at.' I got that from him without him even saying anything. I can say just watching him and seeing how he moves, I learned that no matter where you're at stay humble and work hard."

In the five years since its launch, Dreamville has collected a talented roster of creatives who may not necessarily share similar sounds, but overall share the same vision. This vision has manifested into multiple high-energy and popular collaborations between J.I.D and EarthGang, landed Bas and Ari on the Billboard charts, and most importantly created a demand for a type of hip-hop and R&B music that has been either buried by pop music or had yet to be unearthed. If the recording process of ROTD III is any indication, Dreamville is not here to just release music, they're here to create experiences that can be appreciated and shared by the masses.