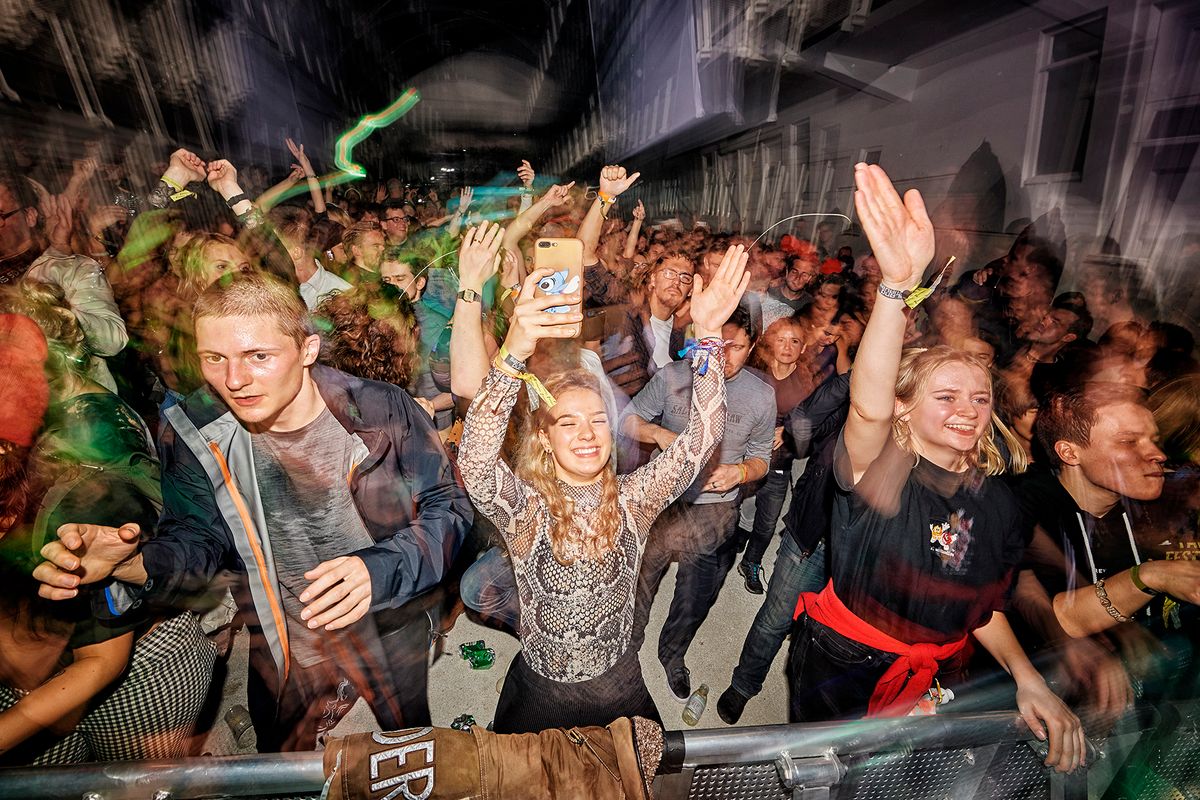 In contrast to blissful summer days full of psychedelics, bralettes and Tinder "festival mode," Iceland Airwaves is held mid-fall in Reykjavík, when it's 30 degrees by nightfall. The city looks like a nautical Christmas village, surrounded by snowy peaks and equally surreal industrial infrastructure, like the beached ocean liner parked outside a popular hotel. At Airwaves, you'll spend a lot of time peeling off sweaters as you enter crowded bars, then trying not to elbow anyone as you layer up before journeying out again. Tindering is eternal, but this year's attendees were bundled up in puffers, and I imagine any psychedelic trip — during which you might glimpse Hallgrímskirkja, the imposing, modernist church straight off a sci-fi film set at the center of town — would be a bad one.

Iceland Airwaves began in 1999 as a one-day party in an airplane hanger, thrown by industry folks to put global eyes on Icelandic talent. Long before cheap flights and a volcanic eruption made Iceland Instagram-famous, organizers simply calculated it was cheaper to bring media and record labels over to see local acts play, than to ship bands over to New York or LA.

Related | How the Recession Turned Reykjavík Into Europe's Capitol of Cool

Twenty years later, aided by Iceland's recent, highly-theorized tourist boom, Airwaves has become the European answer to SXSW's legacy of discovery and platforming up-and-coming music. The genreless festival is structured similarly. Over 140 acts perform across dozen venues and five days, with a 50 percent roster quota of local bands. Unlike SXSW, Airwaves is public-facing festival, with headliners like Whitney, Orville Peck and Mac DeMarco. But their sets felt like side dishes next to the roster's feast of newbie global talent. Over the five days I spent wandering around Reykjavik, I experienced the SXSW phenomenon of accidentally discovering a new favorite band several times, starting from the first act I saw.

Jófríður Ákadóttir is a Reykjavik native, who I heard described as the "Queen of Airwaves." Her current solo project JFDR is reminiscent of a more spectral Maggie Rogers, but Ákadóttir's been playing Airwaves for over a decade, and releasing music since she was 15. She says the festival, one of the rare times of year that international acts tour in Iceland, was integral to the scene she grew up in. "Back in the day, it was people from abroad coming to you," she says. "They would bring your thing, you would bring your thing. It was an interesting mix of influence. I was younger, and more infatuated with that world."

People also love to talk about how SXSW sucks now, tainted by excessive major label presence, corporate branding, and an emphasis on getting onto the best line-ups and guest lists. For now Airwaves keeps VIP access and sponsorships minimal, and the days pass more like a national celebration than a music festival. (Last year, Prime Minister Katrín Jakobdóttir curated the official Iceland Airwaves playlist.)

Related | Bjork: Army of She

Although Reykjavik is rapidly filling up with minimalist cafes and luxury hotels, much of Iceland's capital still feels like a fishing town. The festival's "main stages" are the local art museum and a college gymnasium. Acoustic acts set up in a lakeside church where several locals told me they'd attended baptisms and marriages. Punks and metal bands gathered at the divier Gaukurinn, where bartenders navigated mosh pits to collect beer glasses, and poked their heads into the bathroom to remind attendees it was gender-neutral. Pop acts were stationed in hotel ballrooms, dives and a Hard Rock Cafe, where a Bjork outfit is on view. Seattle's NPR affiliate KEXP beamed cozy daytime sessions back to the US from a seaside hostel.

Iceland's population is around half of Vermont's, but its contributions to music are storied. Thanks to Bjork, Sigur Ros, Jón Leifs and the Norse settlers who migrated to Iceland in the Middle Ages, the country is known for its black metal, neo-classical and art rock traditions — which Iceland fetishists would questionably tell you are inspired by the bleak weather and isolated landscape. Ákadóttir's theory: "Well, there's not a lot to do here. It's something to do with your friends… But there's also just a tradition of coming together to make music. There's a choir in every single town in the countryside."

These genres were well-represented on the Icelandic roster. Getting screamed at and spit on by old-school metal dudes Auðn was surprisingly enjoyable. An equally confrontational performance from art rock seven-piece Grísalappalísa and their Bowie-esque frontman was a highlight as well. Synthwave punk poets Kælan Mikla turned the art museum into riot grrrl séance, and Hatari, who made headlines this year for staging an anti-Zionist protest at the 2019 Eurovision awards in Tel Aviv, closed out the festival with a snarling set of their latex-clad performance art punk.

Airwaves showed that Icelandic music in 2019 is as diverse as music anywhere else in 2019. Reykjavik-born, Berlin-based electronic artist Daði Freyr turned a gray afternoon in a lighthouse into a dance party, thawing frozen music writers with his goofy, '80s inspired synth-funk. Electro-pop acts GDRN, Siggy, Sykur and Hildur revealed the Swedish pop X-factor extends across the Norwegian ocean. The country's budding hip-hop culture was repped by raucous party rappers like Úlfur Úlfur, Emmsjé Gauti, and Aron Can. Teen sister act Between Mountains and 7-piece Seabear staged gorgeous sets of naturalist folk. Hometown heroes like indie folk icons Monsters of Men, Hatari and sister rock act Mammút (the lead singer of whom performed visibly pregnant this year) felt like the "real" Airwaves headliners, all respect to Mac DeMarco and co.

Of Monsters and Men / Ásgeir Helgi

The tangled web of collaborators starts to unfold: a member of Grísalappalísa plays in JFDR. Ulfur Ulfur features Daði Freyr's last project (a series of collaborations with Icelandic peers). "What makes our scene different is the strong collaborative atmosphere," adds Kælan Mikla's Laufey Soffía Þórsdóttir. "We have both a strong mainstream, and a strong underground. But everybody knows each other, and most artists are involved in more than one project."

The scene's intimacy means trends tend to echo around the country, transposed through an Icelandic lens. Ákadóttir recalls how, after Bjork toured with a brass band ensemble, "suddenly there was brass in every band in Iceland." When James Blake and The XX were coming up, everyone wanted to make ambient electronic.

More than anything, Þórsdóttir posits small town culture and the scene's lack of corporatization yields experimentation. "We feel confident saying that the artists here are in it for the music, for the art, rather than 'making it big,'" she says. "We don't have big labels to aim for, except for Airwaves. We just want to create art and have something to share which each other."

Related | Marfa Myths: A Quixotic Festival that Defies the Age of Instagram

Iceland's musical neighbors complemented local stars. Dublin-based tenderpunks Pillow Queens had the crowd howling along to their cheeky queer anthems. Fellow Irishwoman Æ Mak's glitchy, propulsive pop recalled tUnE-yArDs. Rising Norwegian star girl in red's bedroom-spun gay love songs, sounded huge, as she moshed to them along with the crowd.I suspect most attendees napped in the church at some point: I did so blissfully to the dulcet tones of Norwegian folk artist Siv Jacobsen. While waiting for a shuttle, I overheard a Japanese diplomat and an Icelandic newspaper photographer debate the merits of Japanese girl group CHAI.

With its spirit of community and discovery, Airwaves serves artists just as much as fans, and that feels healthy. As our Spotify Wrappeds remind us annually, it's easy to let our listening become mundane and habitual. Iceland Airwaves is a welcome reminder that the world is not that way.