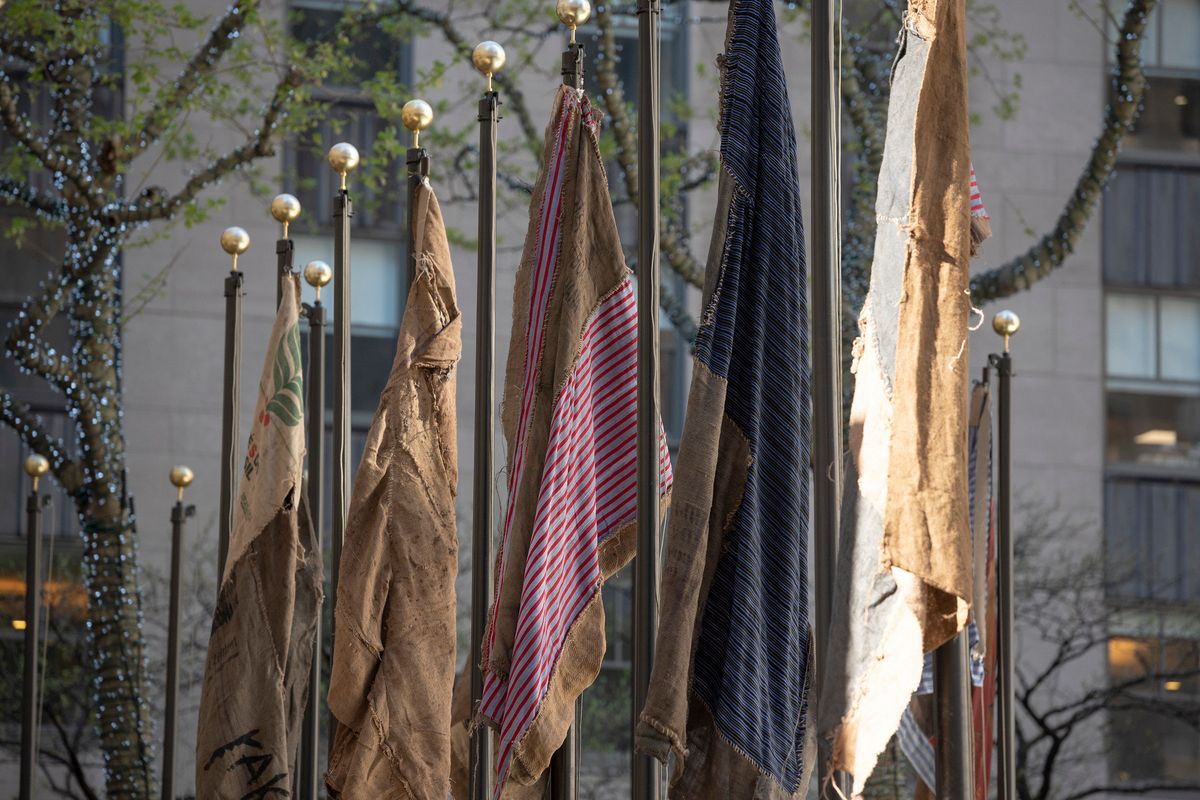 This Ghanaian Artist's Flags Have Replaced the UN's 192

For Frieze New York's inaugural Sculpture initiative at Rockefeller Center, Ghanaian artist Ibrahim Mahama has reconstructed the iconic United Nations flags surrounding the famed plaza's skating rink. The commission replaces the 192 flags currently there with 50 handmade jute flags fabricated in Ghana. The piece is said to be a statement on how income and resource disparities still exist around the world.

Through his installations and wall-based works, the Tamale, Ghana-based artist urges audiences to consider how capital and labor are linked through collective history and commonly used goods. Mahama presented a number of solo shows in Ghana from 2009 to 2013 that incorporated materials such as cloth bags used to carry cocoa and coal. In 2015, he was included in the Venice Biennale, featuring works including jute sacks inscribed with names and adorned with regional patterned fabric.

Mahama has said that his coal sacks, which have been installed in art spaces and public markets, were initially meant to represent "how the body could be looked at," essentially creating a link between how audiences understand global transportation of goods and the labored bodies who make that possible.

"Flags sometimes are supposed to represent the idea of freedom, but they can also be a symbol of oppression," Mahama told Artnet. "I am interested in the combination, and how it manifests itself in the character and experience of the artwork. All the flags are handmade and sewn. Each flag has two different sides and is animated by the wind within the architecture of the Rockefeller Center. I simply wanted to make a decaying flag, out of objects that are a manifestation of our 21st-century condition, but that also hold a sense of hope."

Curator Brett Littman said in a statement that this year's Frieze Sculpture will be "an immersive campus-wide installation that is responsive to the architecture of Rockefeller Plaza," and will feature 14 artists from four continents who are each creating work that "respond to our global political moment." Other participating artists include Nick Cave, Aaron Curry, Jose Dávila, Walter De Maria, Kiki Smith, Sarah Sze, and more. The sculptures will remain on view and open to the public through June 28.