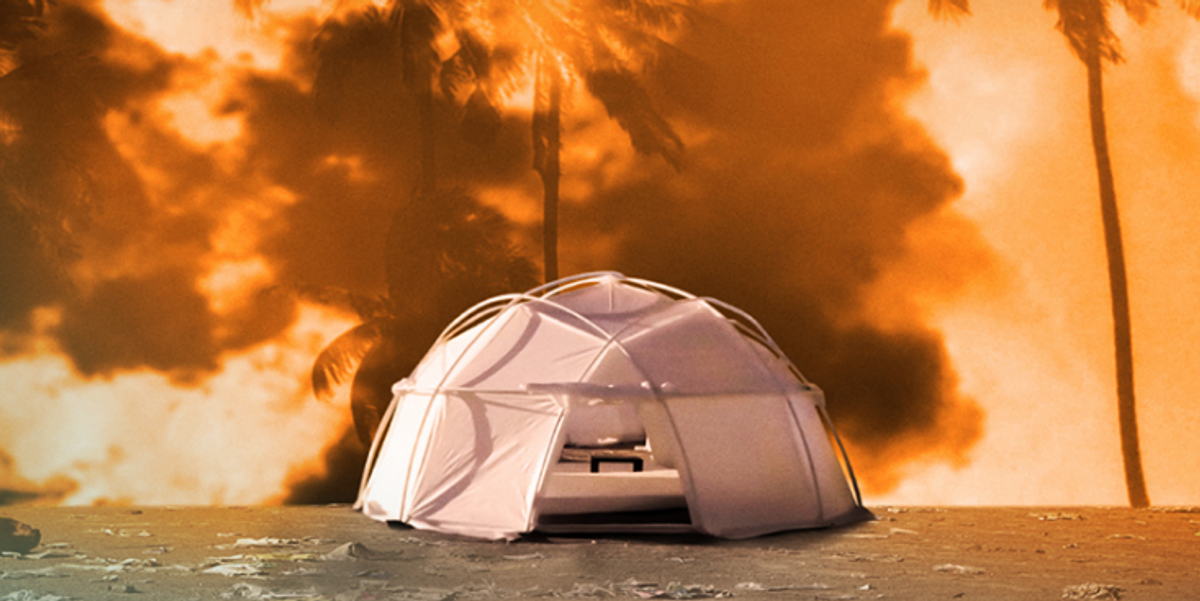 Bless this week! It brings not one but two documentaries about Fyre, the failed influencer-targeted music festival that instantly defined a generation when it went viral in 2017. The first, Hulu's Fyre Fraud, got a surprise Beyoncé-style drop last night. The second, produced by VICE, will stream on Netflix from Friday.

Fyre Fraud centers on a rotating series of talking heads, most notably the festival's founder Billy McFarland, who is currently doing time in federal prison. Also featured are journalists from the New Yorker, Billboard, and Mic, ex-Fuck Jerry employee Oren Aks, and some of McFarland's former friends and employees.

If you didn't tune in yet, here are the five main things to know.

I CANNOT OVERSTATE THIS: FUCK JERRY AND FYRE FESTIVAL SHOULD NEVER NOT BE MENTIONED IN THE SAME SENTENCE. While McFarland was the longtime scam artist (Fyre Fraud goes deep on his pre-festival organizer past, which is dotted with smaller instances of financial fraud) who orchestrated Fyre, and should obviously shoulder the legal blame, the documentary also emphasizes how employees of @fuckjerry's spinoff marketing agency Jerry Media were the taste makers who made it appealing in the first place.

Absolutely no one would have bought tickets to some random event fronted by Ja Rule (Ja Rule!) if smart people hadn't taken over its Instagram. The dudes at Jerry did an incredible job at creating a marketing campaign so squarely targeted at vapid millennial wannabe influencers that it tiptoed around the edge of parody. They knew to get Kendall, Bella, and Emrata on board. They knew how to minimize facts and specifics but maximize hype. They also definitely knew, almost from the beginning, that Fyre festival would be a total failure. Gloriously douchey ex-employee Oren Aks literally admits this on camera.

But Jerry Media accepted that paycheck and did the work anyway, which truly does demand grudging respect. As Instagram's OG meme account, Fuck Jerry has been cynically manipulating social media trends and algorithms for years now. Fyre was the inevitable culmination of their skills.

Adults don't know what memes are

Fyre Fraud is understandably obsessed with the concept of "millennials" and "influencers" and "social media," and with the help of various experts the documentary does manage to paint a fairly accurate picture of the image-obsessed internet culture which made a music festival scam of Fyre's scale possible. Unfortunately, there are also some super cringey references to memes.

I'm not sure that everyone involved in the making of this documentary was actually aware of what a meme is — there are some dated definitions thrown around, and liberal use of that ancient Wordart-style Chuck Norris-y imagery from ten years ago. Literally someone (a dead-eyed venture capitalist, to be fair) brings up the dramatic chipmunk.

Luckily, the New Yorker's Jia Tolentino swoops in to save the day. Her commentary on how a precarious socio-political environment has led millennials to live out their fake lives on the internet — making them easy scam victims, as well as gifted potential scammers themselves — feels important and real.

Billy has an adoring girlfriend

An unexpected highlight of Fyre Fraud is the appearance of McFarland's beautiful model girlfriend, Anastasia Eremenko. What, you thought this guy didn't have a beautiful model girlfriend? Please. For some reason she is delighted to appear on camera and talk about how in love with him she is. She seems nice and I want to help her but don't know how. Anastasia, if you're reading this, please note that Billy! Is! A! Conman! Although he definitely has a Trump-ish aspect to him in that you're never sure if what you're seeing is pure evil or pure idiocy.

The documentary cruelly cuts between footage of Anastasia talking adoringly about her criminal boyfriend and more knowledgeable people characterizing him as a diabolical fraudster and pathological liar. When will straight women start respecting themselves?

Some people DID get luxury villas

Much of Fyre Festival's inherent virality comes from that vast gap between expectation and reality that attendees fell into — they arrived on commercial jets instead of sleek private planes, they ate cheese sandwiches instead of sushi, and they were told to sleep in half-constructed tents instead of luxury villas. This outcome, combined with the fact most attendees appeared to be wealthy assholes, meant Fyre was absolutely the funniest thing that has ever happened on the internet, ever.

Except some influencers did get given villas and other luxuries. One of them, Alyssa Lynch, makes an amusingly clueless appearance in the documentary. What becomes clear is that the VIPs who actually showed up (many, including all musical acts, sensed something was up and didn't) had a totally different experience to people who paid slightly less money for tickets. They were sent to a nicer part of the island and put up in private accommodation, swam at the beach, and partied at actual bars as opposed to drinking stray bottles of booze found on the ground. In retrospect, this dynamic makes Fyre feel even more sinister.

Bahamians were the real victims of Fyre Festival

Hey, guess what? Fyre Fraud reveals that the Bahamians who worked day and night on the impossible task of getting Fyre ready on time are still owed thousands of dollars by McFarland. They weren't paid, despite enduring what the documentary implies were awful working conditions — in the days preceding the failed event, it doesn't sound like anyone got much sleep.

McFarland and Ja Rule did approximately zero research into the local culture, and didn't even bother to pay taxes on the food and booze they imported. They also failed to realize that Fyre coincided with the biggest event of Exuma's calendar year: the National Family Island Regatta, which draws thousands of attendees from neighboring islands and means most private accommodation is all booked up.

Also, there's not much room in the water for supermodels on luxury yachts. Not that they were ever planning to show up.