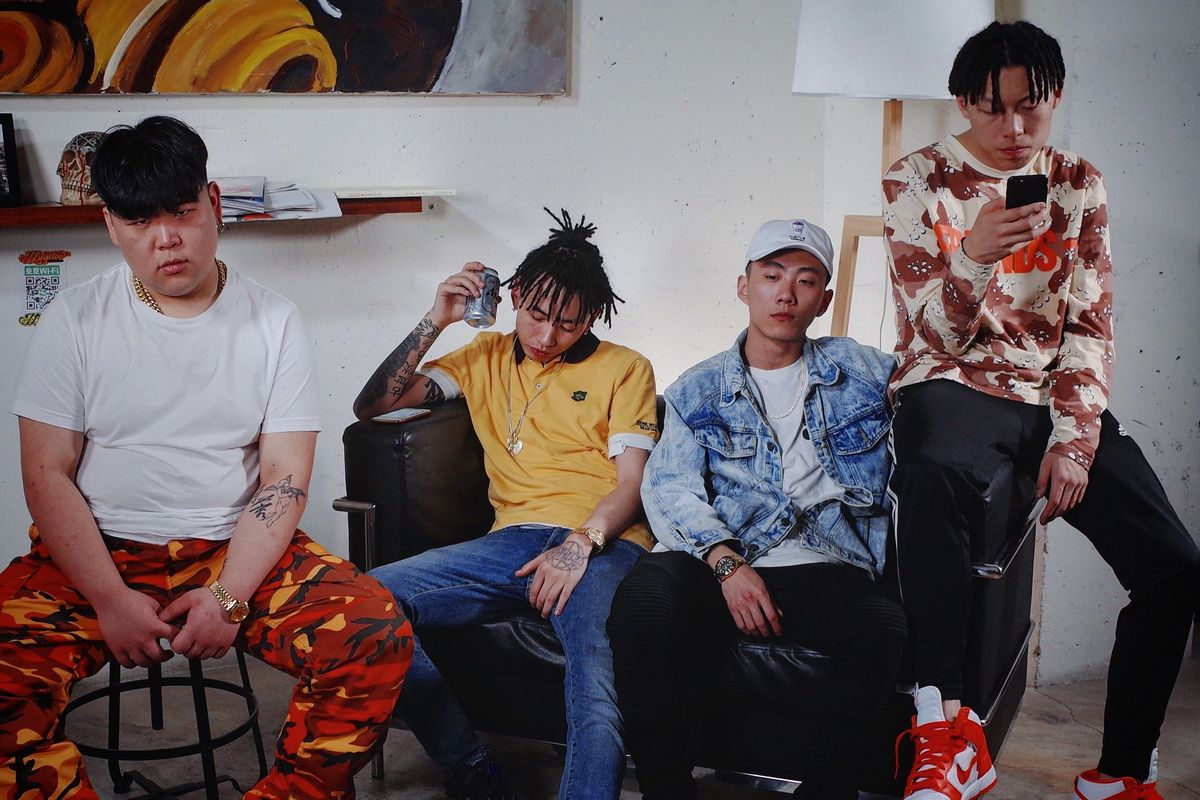 Since the end of the Cultural Revolution in 1976, the People's Republic of China has juggled balancing traditional Chinese morals with controversial Western influences. Recently, this battle has centered on hip-hop. On Friday, Gao Changli, the director of the State Administration of Press, Publication, Radio, Film and Television of the People's Republic of China (SAPPRFT), outlined four "Don't" rules:

As a result, China's government forced rapper PG One to apologize for his lyrics, and banned his music from most Chinese websites while arguing the genre was "promoting obscenity, violence, crime or threatening public morality." GAI was also pulled last week from hit show The Singer.

One group, however, was left out of the conversation: Higher Brothers. Represented by 88 Rising, Chengdu-based rap quad shot into the spotlight through "Made in China," a rap song with lyrics "My chains, new gold watch, made in China," touting subtle Chinese pride without alienating foreign audiences.

While PG One and GAI's careers are in jeopardy because of the PRC's new censorship practices, Higher Brothers is prepping for their Journey to the West with a 2018 North American tour. With China becoming inseparable from the international economy in all aspects — music, entertainment, fashion — domestic artists are treading a fine line of staying under China's favorable view, while also generating successful global content.

In recent years, Chinese artists have become increasingly visible on the international stage; Fan Bingbing in X-Men, designer Chen Peng, and obviously Higher Brothers. In the '90s and early 2000s, Chinese pop culture was still largely perceived as low-brow in comparison to their Western, Japanese, and South Korean counterparts. While pop stars like Jay Chou may have achieved idol status in the Mainland, you'd be hard pressed to hear "發如雪" (Snow-Like Hair) playing on MTV or KISS FM in 2008.

In 2018, things have shifted. While not household names, artists like Jolin Tsai and Kris Wu hold much more social capital in the U.S. than they would have 10 years ago. With Higher Brothers, the story is different.

After "Made in China," 88Rising released a YouTube video with hip-hop staples like Migos, Lil Yachty, Playboi Carti and more reacting to Higher Brothers' track. In it, the rappers shared their insight and at times, surprised comments about how they were actually enjoying the piece: "I don't think I ever wanted to be Chinese more than this moment right now," one said. "They bring their culture into it. That's what sticks, that's what makes it amazing," added another.

Higher Brothers' image and aesthetics click with some of the hip-hop industry's biggest artists, which raises the question: Is Higher Brothers' success attributed to unintentional Pro-Communist Party propaganda?

Since pop culture's explosion in the Mainland, China has historically used entertainment as a tool for spreading pro-party messages. Tianfu Shibian, a government-backed band, frequently releases content laced with not-so-subtle messages including One China Policy thoughts. "There's only one China, HK, Taipei, they are my fellas," and "Far away from us you forget how to act. Even dogs know to come home with a thankful bark" are just some of the lyrics in "Force of Red," a song with attacks on Taiwan's President Tsai Ing-Wen, who has long been insisting for independence from China.

Higher Brothers, while not actively praising particular policies or views, do promote pride in being Chinese. Their song "WeChat," the name of China-based mega-media company which is a hybrid of Facebook, Twitter, Venmo, Ebay and Google Maps, says, "There's no Skype, no Facebook, no Twitter, no Instagram, We use WeChat." This references all the media outlets banned in China. Chinese citizens are increasingly celebrating their livelihoods separated from their Western counterparts, though the influence is unmistakeable.

According to the Institute of International Education, two in five international students enrolled in American high schools are from China, with the total number of students rising by 48 percent between 2013 and 2016. These students bring their American influences back to their home countries, and this births new culture.

Combining these expats with local entertainment industries, contemporary China has no need for Western exports: they've developed their own. Alibaba replaced Ebay, Weibo replaced Twitter, and Bilibili replaced YouTube. You name a website we take for granted in America, and China probably has their own version that's linked to all these sites mentioned — and with endless updates that allow for a self-generating ecosystem.

Comparing Higher Brothers to rappers like Jay Chou, the energy is much more international; you question if you're listening to a Cardi B or Migos Spotify playlist. This is the key to their success: Lyrics set against a trap beat, which promote subtle nationalism, while enticing foreign audiences: The PRC has nothing to complain about.

As China's influence globally continues to rise, domestic hip-hop artists will have to learn to either re-brand themselves to be government darlings, or risk losing on significant profits, and most importantly, WeChat shares.