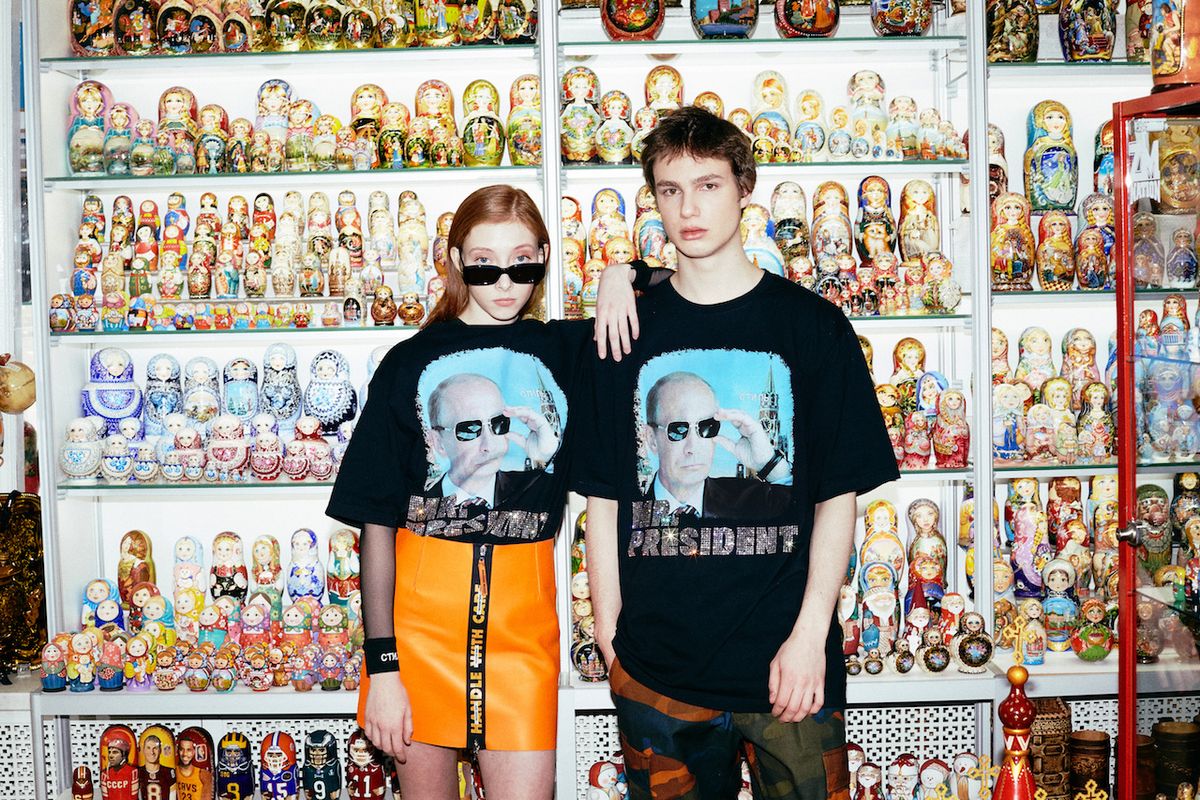 Why Did Heron Preston Put Putin's Face on a T-Shirt?

A capsule collection by streetwear god Heron Preston and Moscow-based concept store KM20 offers a new take on tourist attire. The range, which launches in-store today and online tomorrow, includes a t-shirt and a fanny pack, and are reminiscent of the thousands of souvenirs Preston observed "sold on every street corner" during his first trip to Russia last summer, according to a press release.

One item that seems to have left a particular mark on Preston's creative psyche were the t-shirts featuring images of Russian president Vladimir Putin — his capsule t-shirts feature the controversial politician's face covered in rhinestones. "A tourist t-shirt has never been so luxurious and hyped at the same time before," the release declares.

At a time when Putin's political enemies are mysteriously turning up dead, the FBI is investigating Russian interference in the 2016 American presidential election, gay men are being kidnapped and tortured in Chechnya under Putin's watch, Russian UN representatives continuously veto solutions to end the bloodshed in Syria, and our own blustering president does his best attempt to be as Putin-esque as he can, is a Putin streetwear shirt really the merch that we need?

Preston assures that "making a Putin shirt was never about a political message," and that in fact, he doesn't "even follow politics." Instead, the designer says, "It was my fascination and curiosity with Russia as an American outsider who have never traveled there and had only experienced it through cinema and the internet that drew me to this idea."

Preston then goes on to describe the qualities he associates with Russia, "this pillar of power and strength. Espionage. The country's history in the great space race vs NASA. It is the largest country in the world by land mass, and Putin is the leader of that."

He further describes his fascination with Putin, which in a way feels like a psychoanalytic take on the young male obsession with streetwear culture and performative masculinity in general: "I'm more into his image as this super powerful man, who is also into extreme sports, so he feels youthful. I feel like I would have way more in common with him than Donald Trump, just based off of his athleticism. In a way, it feels ironic when I wear the shirt, but at the same time not because there's a deeper story."

There is a deeper story, but whether it's one that the kids who wear the shirt will understand is a different question. Perhaps the issue is about what fashion actually owes us; do designers need to be conscious of politics in their creations, or is it acceptable to eschew real world dilemmas altogether in favor of cheap visual irony? Fashion encompasses many things: a multi-billion dollar global industry, an art form, an indispensable part of our lives in terms of social organization and protection, and of course, it can be a political statement. Images of controversial figures have been remixed for decades — Che Guevara's face has been slapped on every t-shirt, woven bag and tourist trinket you can think of. But when it's a living figure whose decisions still impact mass populations, should that image be treated more carefully?

Preston doesn't seem to think so. As he explained, "When I went to Moscow for the first time, I noticed Putin t-shirts sold at all of the souvenir tourist shops in town. I bought one and pretty much wore it the entire time I was there. I really love to take on the role of an extreme tourist when I travel, I think it's funny. So this t-shirt is my twist of a Russian tourist tee."

Maybe sometimes a t-shirt is just a t-shirt.