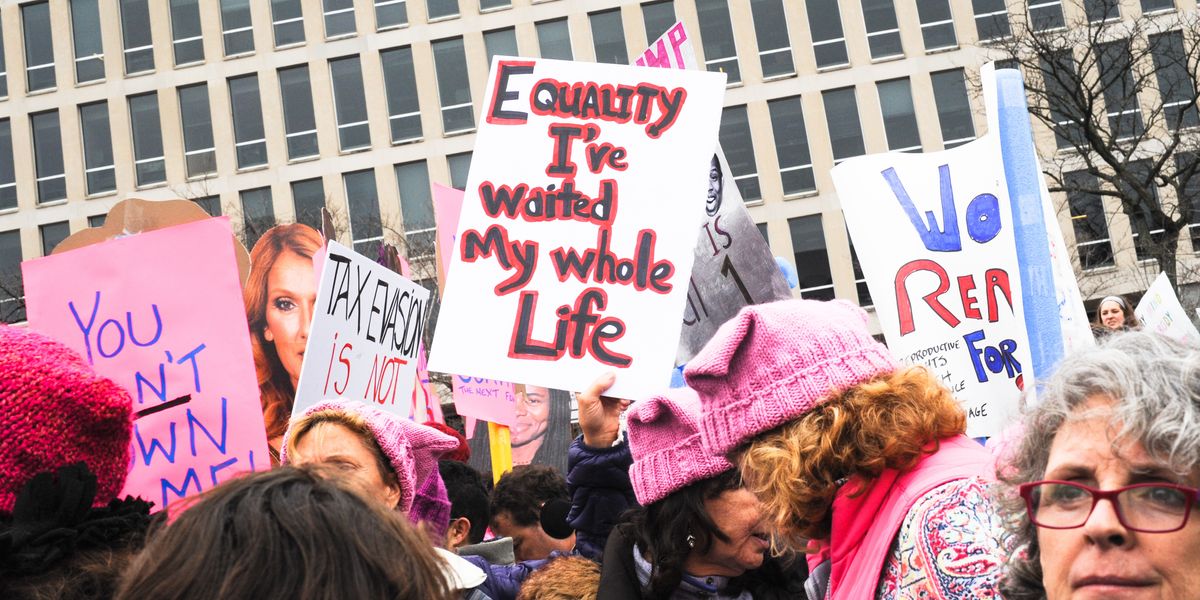 The Women's Strike is happening this Wednesday, March 8, and with any luck it's going to be living proof of what a world would be like without women quietly running the show. With the success of the Women's March in January, the strike is designed to keep the resistance rolling in Trump's free world by highlighting how crucial women are to a thriving economy, as well as the discrimination they face in the workplace.

If you're down for the cause, but don't know where to begin, here's everything you need to know about A Day Without a Woman.

Aside from recognizing how power is disproportionately masculine, the march covers all kinds of gender injustice or exploitation women and the LGBTQ community faces throughout employment. Film maker and activist Sarah Sophie Flicker says resistance is not a sprint or a marathon, but a "relay race," and the strike continues the momentum of those that have fought the patriarchy before us.

"We have to pass the baton and inspire less engaged folks to show up how they can," Flicker says. "A strike is much different than a march and asks for a different kind of participation...It forces us to wrestle with the question: what does a day without a woman look like? Is this even possible in my life? Is it possible for caregivers, teachers, nurses, single parents to fully participate in? Is it possible for low income/minimum wage workers? Probably not. And that is a problem."

While Flicker recognizes the historic impact of the Women's March, she knows "not everything can be that big, that sweeping," which doesn't make other actions "less successful." She encourages everyone to engage, even if it's in the smaller ways – weaving activism into everyday life.

"Set aside a few hours a week to make calls, show up to town halls, show up to rallies and marches," Flicker advises. "Be loud on social media. Artist, come up with new, creative ways to engage." The importance of community, Flicker says, whether they're your own or not, cannot be underrated. "Create your own action groups...show up for actions that effect the most vulnerable communities. Communities that aren't your own. This is what real solidarity looks like! It's inspiring to see it happening everywhere!"

While Sarah says trying to replicate the march is counter-productive, especially given that striking – as opposed to protesting – is very impactful to the livelihood of many, there are still a whole host of people doing it. Alexandria City Public Schools System are closing after 300 employees requested the day off. You will not be alone.

You're scared you might be fired:
Wear red in solidarity as a sign of support and love, sacrifice and action – the color is also associated with the labor movement.

You wear a uniform but want to show solidarity:
You should try to keep from shopping in stores or online, to protest workplace inequities (aside from small and minority-owned businesses). While avoiding shopping might seem extreme, or might even particularly difficult for you, Flicker says it's essential in recognizing the value women of all nationalities contribute to our economic system. "Women receive lower wages, experience greater inequities, vulnerability to discrimination, and job insecurity. We aim to show what this country and this world would look like without the contributions of women," says Flicker.

Will it make a difference?

No matter the scope of the strike, there is no question A Day Without Women will have impact. Why? Because, either way, as Flicker tells us, we are forced to have "complicated and courageous conversations."

"We ask that men talk about equal pay, paid family leave, gendered roles on this day. We ask them to lean into caregiving and domestic work. We ask them to support the women in their lives who wouldn't be able to strike without their help. I think these are some important, impactful ideas. It allows a break from these structures, even if only for a day."

When you think about it, it's not often we step outside our own bubble long enough to consider how our employment is oppressing its workers, or even if we do realize something is wrong, that we feel like we have the support to address discrepancies. This is definitely the time to do away with whispers, because now we must shout.