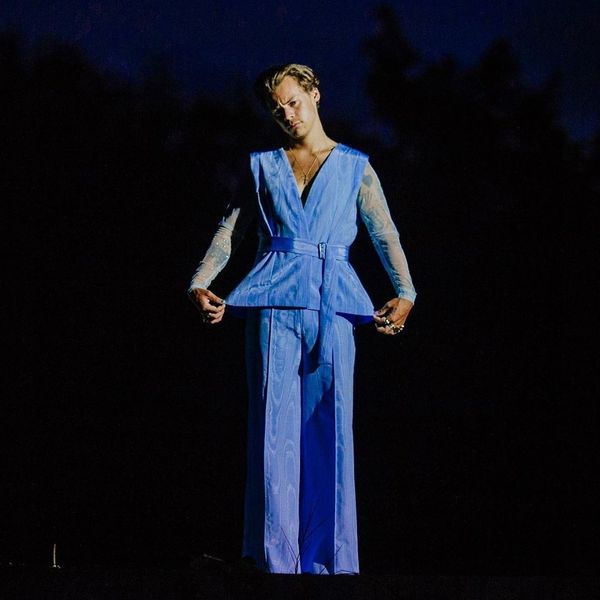 A Closer Look at Every Harry Styles Outfit in 'Lights Up'

After much internet speculation, Harry Styles finally dropped his highly anticipated single "Lights Up" and accompanying music video. The clip, which is already at 4.2M views and climbing, show Styles in a variety of costume changes (when he's not showing off that shirtless bod, of course).

Unsurprisingly, Styles opted for two different looks by Gucci. One of them is a custom navy sequined jumpsuit that he wore along the beach shore, and a custom metallic shirt with suspenders that he wears inside a home. The Italian luxury brand has been Styles' go-to for red carpet looks, having arrived at this year's Met Gala with the brand's creative director Alessandro Michele.

His other two looks are by a pair of under-the-radar brands. In the scene where Styles is floating atop a pink pool, he's sporting a custom look by London-based designer (and close Styles collaborator) Harris Reed. The two-piece bespoke silk moire suit is rendered in a periwinkle shade, keeping with the theme of blue looks throughout the video.

Finally, the scene where Styles is sitting in the back of a moving motorcycle sees him wearing a fluid pink shirt by Swedish brand Lazoschmidl. All of the outfits were arranged by his longtime stylist Harry Lambert, who Reed calls their "guardian angel" for helping give them their big break.