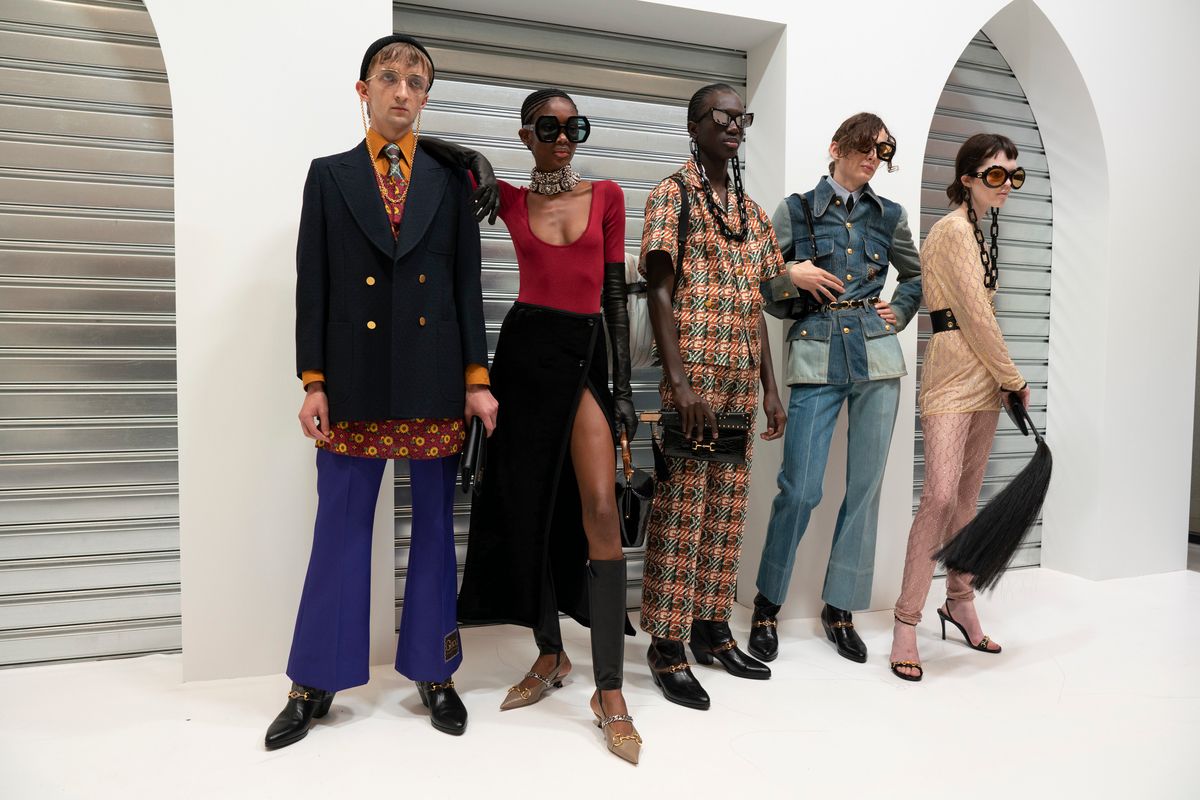 For Gucci's Spring 2020 show in Milan today, each seat contained lengthy philosophical show notes that referenced the work of social theorist Michel Foucault. Inside, they described the relationship between power, ideas, fashion, and society — concepts that manifested themselves in the first 60 looks of the collection, where models stood stoically as they glided on a conveyor belt in plain beige and ivory outfits. According to the brand, they represent the "uniforms, utilitarian clothes, the normative dictated by society and those who control it."

But afterwards, models emerged against the white, clinical set in the colorful getups and maximalist attire the brand is known for under Creative Director Alessandro Michele. The idea of liberation was heightened even further when models appeared in hints of sexy details that have not been addressed the past few seasons. (The word "Orgasmique" was displayed by the show's entrance as well as on a model's jacket.) It's just one of the many ideas Michele explored with gusto this season: Here's everything else you need to know about the collection.

Gucci cited the opening 60 looks as "the most extreme version of a uniform dictated by society and those who control it." Each of them were incorporated into the show to make a statement and will not be sold.

In keeping with the trend of moving away from tiny sunglasses this season, Gucci opted for giant oversized frames, including some pairs with attached chains.

Perhaps the biggest surprise in this collection was the many sexy looks that nod to the brand's '90s heyday, including see-through lace skirts with thigh-high slits, deep plunging necklines, and S&M-style riding crops.

Pants were cut with a wide leg in a variety of colors and patterns as a throwback to the popular '70s-style trouser style.

The brand did not shy away from its signature maximalist magpie aesthetic, with vintage-inspired dresses in rich embroideries and quirky patterns on full display here.