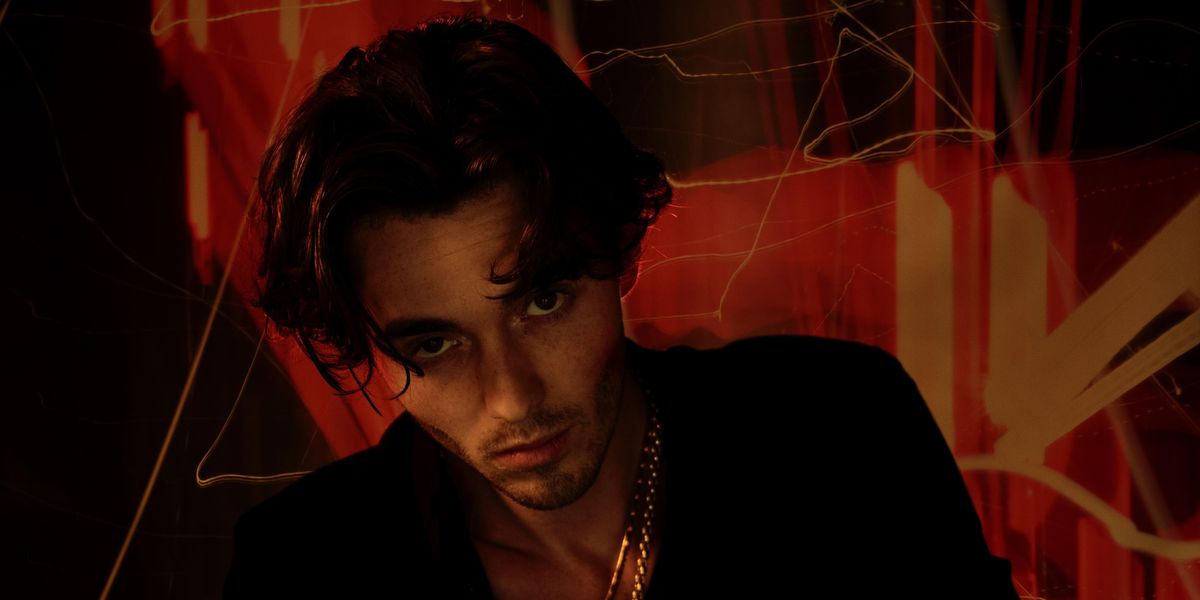 For Greyson Chance's new single, "Hellboy," it all started with a pair of boots.

Outrageously red, taller than imaginable and hot as hell, the platform shoes immediately spoke to Chance, who bought them from a thrift store upon first sight.

"I walk into the studio in those shoes and everybody is just looking at me like, 'What is this kid on?,' and I said, 'We are writing a song about sex today, I'm wearing these high heels, that is the vibe,'" Chance said.

From there, "Hellboy" was born. Packed to the brim with sexy lyricism, sultry vocals and a seductive beat, Chance uses the track to raise hell and completely body the "Hellboy" persona.

Though the track is just a small preview of the range Chance's fans can expect from his forthcoming album, "Hellboy" meant more to the artist. For Chance, "Hellboy" was about rediscovering his confidence, finding his comfortability and just having fun with music again after facing the pandemic's hardships.

PAPER caught up with Chance to talk about his latest single, his next album and more, below.

What inspired you to write "Hellboy"?

It's a long and complicated story like everything else. But the pandemic has been, for me, sitting down trying to focus and make an album. As the world has been crashing and burning around me, it was a little difficult to truly stay focused on, "What is the intention? What do I want to say in this next body of work?" And "Hellboy" to me was the first time with the record where I actually remembered how fun it could be and how I could step into this world, step on stage, step into the studio and become this character. "Hellboy" was the first time with the album where I felt like I was embracing the fun in music again and just thinking about, "Who can I become when I walk into the studio today?" So it is a bit of me embracing an alter ego, but also for the first time during the pandemic finally having fun with music again and finding fun in life in general.

What was the actual writing and recording process like?

It started in Nashville, Tennessee as so many good things do. I had woken up — I'm like a crazy morning person so I wake up at like 5 AM every day, which my boyfriend hates — and I woke up this one particular morning in Nashville and there was this thrift store that my friend had been telling me about. I went and found these red platform boots. When I tell you that they were probably seven inches, they were these wonderful, crazy shoes — red leather, the whole nine yards. So I walk into the studio in those shoes and everybody is just looking at me like, "What is this kid on?," and I said, "We are writing a song about sex today, I'm wearing these high heels, that is the vibe." Legitimately, it's funny something that random and particular inspired the entire song because I walked into the studio and was talking to Seth, who is my co-writer and said, "I'm a Hellboy today, I'm gonna raise hell," and we said, "Wait, that's actually really cool," and then we probably wrote the song in like 40 minutes. So all inspired by high heels, baby.

Mike Robinson is the producer on this song, but I've been doing this for 11 years now and not only am I a songwriter but I have to be involved in every stage of the process. As Mike is producing the record, we're writing and we're adding what we think is appropriate and then I'm in that studio day in, day out, making sure it's perfect. I do wish I was a better producer — I'm quite shit with a laptop. But I was in Tennessee working on this and all of the other songs on the album for a few weeks last year.

I love the French toward the end of the track. What's the significance?

I'm a French speaker and have studied French for a very long time. It was one of those things too where I was already in high heels at that point. It was one of those days in the studio and so I said, "Let's try it, let me do something." So the French is basically saying, "Heaven isn't real unless you're with me," and I thought that was an interesting and cocky way to close out this character and this song.

In the track, you write about having someone "on their knees" and "begging for you." What's one thing someone could do that would get you to do the same?

I am very, very true to my zodiac sign. I'm a Leo, and then I want all of the attention and all the admiration — 100%. But it has to be timed right, because there's certain moments where, of course, I don't want any attention or any admiration. And so what I have discovered is, I need the right attention at the right time, and that's what really possesses me to be with somebody and to show them everything that I have. So I think in order to unleash the "Hellboy," you have to be cryptic, you have to speak my language, and you just have to know when is the right time to show me all the love and all that admiration.

You followed up your other 2021 single, "Holy Feeling," with an unplugged version of the track. Should fans expect "Hellboy" to get that same treatment? Or is the studio recording the only way you intended it to be heard?

The studio recording is definitely the true way I would want [fans] to hear it. For "Hellboy," this is an entrance into my record and to now a body of work. And why I have intentionally picked "Hellboy" after "Holy Feeling" was to show everybody that this body of work has a good range. There's a little bit of everything on the album, and so what I would tell the fans is they're going to be getting so much content, whether it's unplugged versions, whether it's me at the piano singing different songs from the record. I am so excited to finally share this world with everybody and my fans.

Your past few singles have had this light, almost ethereal feel to them, but "Hellboy" deviates from that with a more edgy, club pop feeling. Are you ushering in a new style of music, or just mixing it up?

My comeback story all derives from my record in 2019, called Portraits, and Portraits was the first time where I actually let everything go. I let every expectation fall to the wayside, and I went into the studio and wrote music that excited me and that I was interested in listening to. I was also incredibly honest in that process in terms of the lyrics and that was the first time I'd ever really done that in my career.

This upcoming body of work is me channeling that energy again. If I'm being completely honest, the pandemic has been hard. I played 100+ shows in 2019 going to playing none in 2020. So what that came to was me rediscovering my confidence; it was me figuring out who I am as an individual and I'm located in one place for 365 days, which is just — it sounds silly — but that was something I had no grasp on. This body of work took a long time — probably longer than it needed to, but it was me finally again feeling comfortable with myself, feeling excited by the music.

The reason why I'm excited to show everybody "Hellboy" is this is a part of the body of work where it's fun and light, and the whole experience of listening to the songs from top to finish, you truly get to see a glimpse into my life during the time that I was writing. It's a little chaotic, it's a little all over the place — it's like your bedroom during the pandemic, which I assume is probably just a little messy, a little unkempt. But that is what this record is like, and so "Hellboy" is the time where you're coming home at 3 AM and you've had four tequila shots and you don't know where your phone is.

In a recent Instagram post, you talked about how the meet and greets are what you miss the most after the pandemic shut everything down. How have you been trying to connect with your fans and why are these connections so important to you?

What's funny is, we've all become accustomed to getting on Zoom or FaceTiming or talking to our friends online and staying connected via our phones and via technology, but it's just not the same, no matter how you cut it. There's something that is so powerful about being able to hug somebody and being able to say, "How are you?," and really look them in the eyes. For me, I started off in the pandemic very, very present on social media. That was my m.o., and then I really did have to put it down for a second because I felt a gigantic pressure for making sure that I was always around and always tied to this thing. What I found now is just getting on Live with my fans every so often is bringing me back that feeling. Rather than trying to be on my phone 24/7, it's so much more productive to just hop on Live every so often and stay connected with them. What I miss most is the shows and I know that my fans need those just as much as I do, as well.

What do you hope listeners take away from "Hellboy" and this next album?

My biggest goal for anybody listening to my music, always, is to know that it's authentic and that it comes from a place of pure artistic exploration. This body of work coming up really does represent my life the past year. It represents the feelings and the emotions that I was having, not only during a pandemic, but also I'm like totally madly in love right now and in a long term relationship, which has never happened to me. So there's a lot of that on there, as well. And with my music, always what I've told my fans is, if you want to know what's happening in my life and what's going on, play the fucking record, it's all in there. I'm excited to share another piece and another year with my fans with this record.

Stream "Hellboy" by Greyson Chance, below.