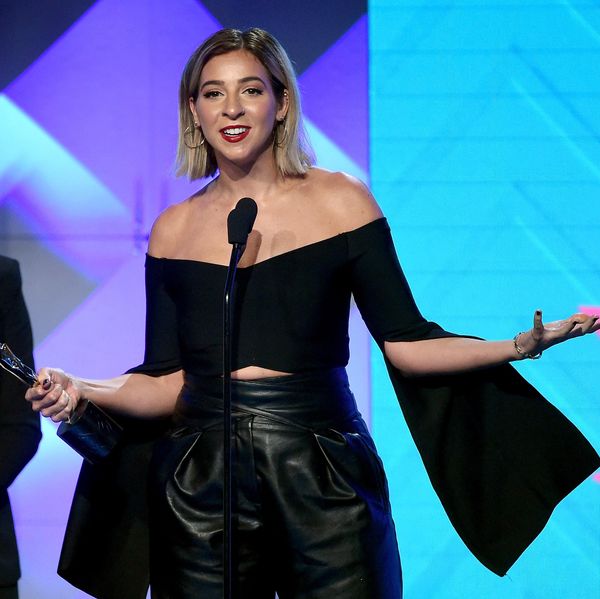 YouTuber and musician, Gabbie Hanna, best known for faking a trip to Coachella and the sound at the 3:19 minute mark of this video, is currently under fire after she lashed out at critics of her 2017 "book" "of" "poetry," Adultolescence.

The whole saga started April 19 when Hanna took the opportunity, while tweeting about her struggles with ADHD during the writing process of her 2020 book Dandelion, to address criticisms of a book that instead came out over three and half years ago. "I still can't believe I wrote a funny, engaging, thematic poetry book about sexual assault, mortality, childhood abuse, mental illness and suicidal ideation as my first release — and all people cared to share was 'link in bio' and 'family is relatives,'" she said, referring to two of the most memed poems to come out of Adultolescence. (They do honestly make Rupi Kaur look like e. e. cummings though.)

Hanna then went on to single out YouTuber Rachel Oates, sharing screenshots of some of her negative reviews of the book in response to a commenter that pointed out that critique was a part of the creative process. "I also just wanna say that Rachel Oatmeal took the time to write a book from the perspective of a dog (since I write mine from the perspective of an abused child) to mock me, yet she's still too much of coward to release under her own name. What a *loser* lmao," she tweeted, referring to Oates' own parody of the book, Doggolescence.

Refusing to let it go, Hanna continued to attack Oats on Twitter and her Instagram stories with an increasing amount of venom. She compared the amount of views on one of Oates' videos to her own saying "No one cares about her unless she's talking about me.," (it's worth pointing out Hanna has 5.7 million subscribers and Oates has 200k) as well as tagging Oates in her posts.

Oates did eventually respond in a private message, which Hanna screenshotted and posted to her story adding that she had been blocked afterwords, which read, "leave me out of your attention-seeking games and go get some help please. Clearly you're having some sort of breakdown again and I understand, I've been there too, but this won't help." Hanna dismissed this as Oates attempting to gaslight her and went on to further attack Oates calling her "a toxic, manipulative, ugly person (I can say that bc shes[sic] ugly on the inside.)"

Things didn't get much better though when another YouTuber, Angelika Oles, attempted to defend Oates, after Hanna posted another views-shaming tweet. "I just think this is unnecessary," Oles wrote. "Say your part about criticism/hate/whatever you want to call it, but multiple tweets calling someone obsessive and a bully... while being obsessive and a bully back is an interesting way to go about things." Naturally, Hanna fired back with another calling Oles, who's channel frequently cover celebrity drama, hypocritical and lumping her in with Oates as "narcissistic, confused, goofy-ass bitches."

At this point, even Hanna's fans were trying to calm her down and relent. Oles also astutely pointed out that Hanna has a pattern of starting shit on social media conveniently around the same time she's promoting new music and sure enough she has a new single coming out next week.

There's also has been these tweets that are just so thoroughly unhinged that we can't overlook them.