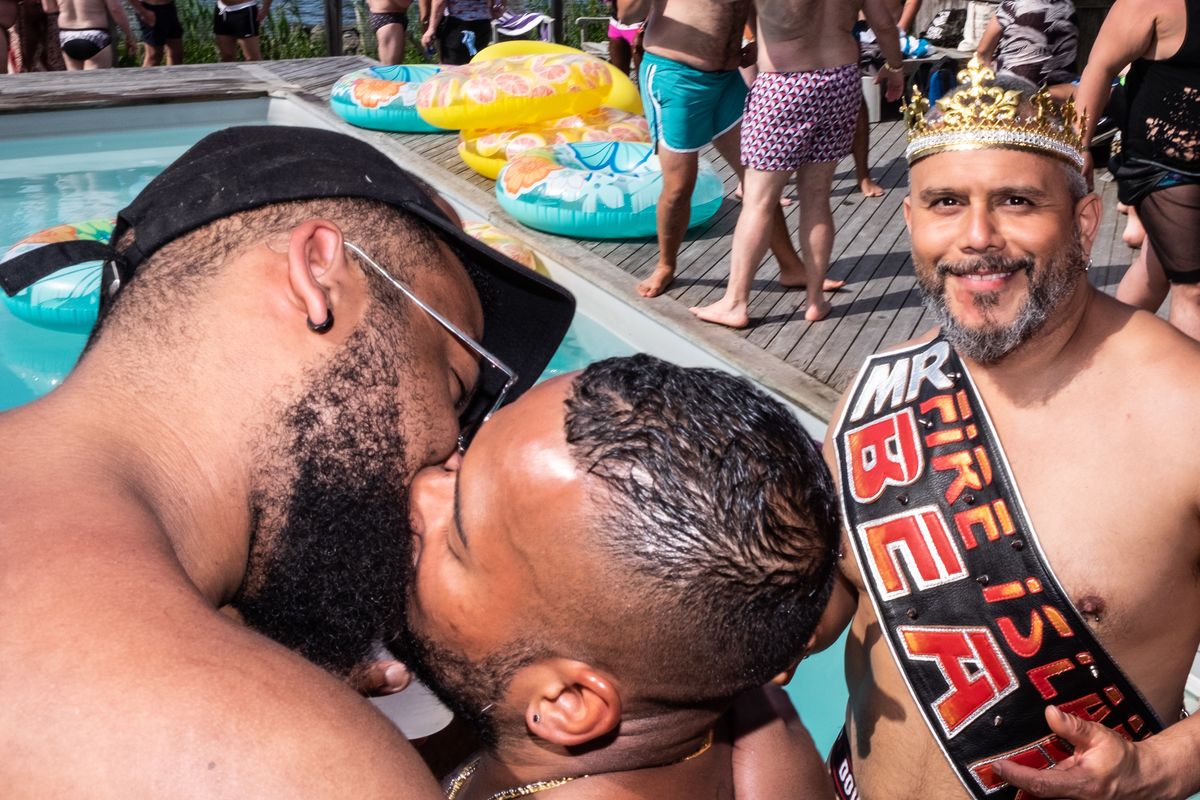 The internet defines a Bear mainly in terms of their physical appearance: they are hairy, larger men who project an image of rugged masculinity. Started back in the '80s in San Francisco (evolving from the popular leather scene), Bear is a classification in the male gay community that has since then gone global, with events celebrating the spectrum of "Bearness," including the annual Fire Island Bear Weekend.

Festivities over the course of the weekend include the Beers and Bears Dance Party, the Bear Ass Tea Dance and Pool Party, and the crown jewel of the weekend, the Mr. Fire Island Bear Contest.

Upon arriving in the Fire Island Pines, the first stop of the day was the VIP Bear Pool Party, held at a waterfront mansion overlooking Great South Bay. The home was incredible with a large idyllic pool, an oasis of a hot tub, open bar, and a secluded deck complemented with a bowl of condoms. I soon learned that swimwear was very much optional, and that I was very overdressed.

While my outfit and appearance contrasted that of attendees, as the day progressed it didn't matter. The Bear community was one of openness, friendliness and above all else, love. While the party had all the trappings of exclusivity, I was shown that this wasn't going to be a party like a boujee residency in Manhattan where connections can be fleeting and the only warmth you get is from a crowd at the bar. I was among people that had been friends for decades, couples that had been committed to one another for longer, and new faces who seemed just as comfortable as the veterans. Perhaps the most interesting Bears I met poolside were partners Bruce Michael and Bruce-Micheal, who took the title of Mr. Fire Island Leather 2001 and 2019, respectively. They've been together for years and are inseparable.

As the pool party began winding down it was time for the main event, The Mr. Bear Contest. The venue was the raucous Cherry's on the Bay, and our hosts for the evening were the captivating Ginger Snapps, a drag queen with numerous Fire Island residencies, Mr. Fire Island Bear 2017 Danny Jiminez, and a lively 'pup' who took the stage on his knees wearing his red leather dog mask.

Four hot young cubs (Bears' youthful counterparts) went up against one another in a tense battle of three rounds: bar wear, Bear wear and the question round. Of the many outfits of the night, the highlight among the leather was an incredible Christina Aguilera Dirrty costume (you know the one). Victory seemed all but confirmed for the Xtina stan until the Question Round. Then, Eugene Guye, a full-bodied Australian, stepped up in his jockstrap and left the audience stunned when he was asked what he would do with the platform of Mr. Fire Island Bear 2019. Answering with empathy, passion, and knowledge and awareness about LGBTQ+ homelessness, he snatched victory in the 11th hour.

Being a bear isn't about being the hairiest, largest, or manliest after all; it's all about being comfortable in your own skin and looking after your family. If we all acted a little more like Bears, the world we know would be a kinder, more welcoming, and open place.