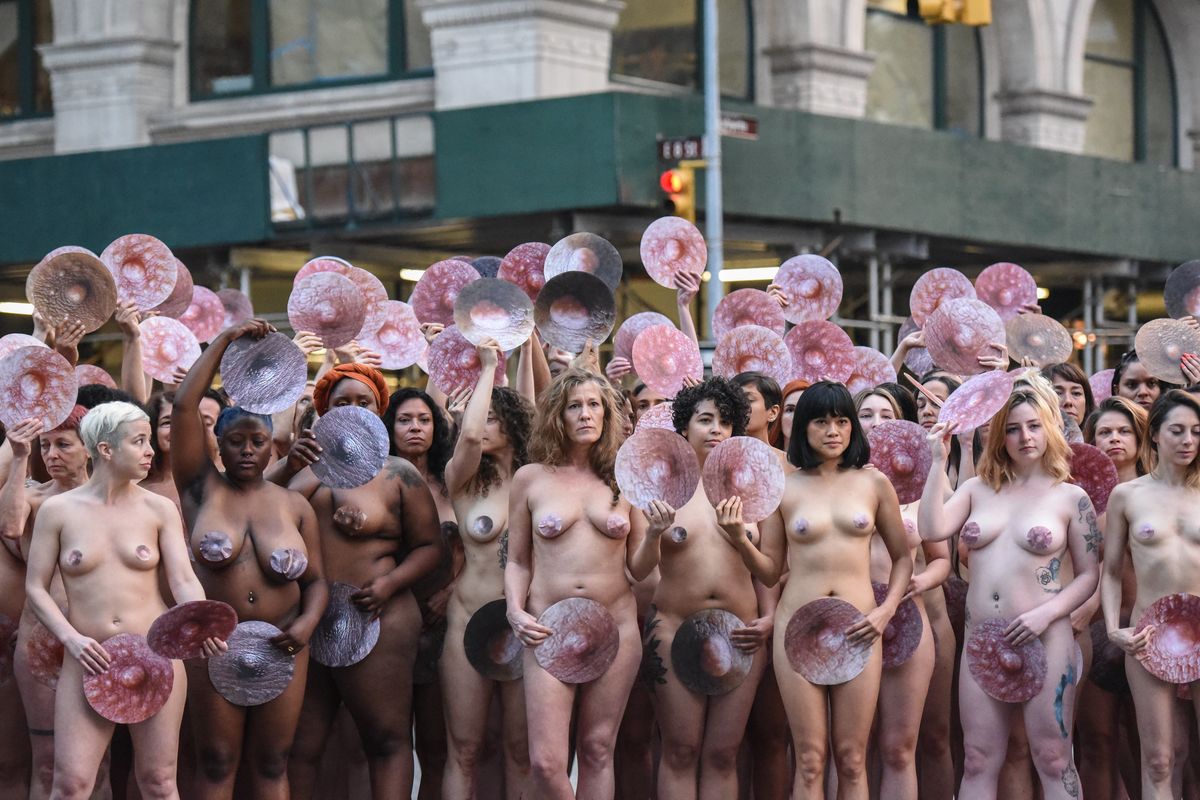 This weekend saw the latest nude activation by photographer Spencer Tunick, who's been getting people naked for mass photo op protests since the 1990's — including a viral anti-Trump protest outside RNC, which PAPER spoke with Tunick about back in 2016.

On Sunday, 125 people stripped down outside Facebook and Instagram's New York headquarters on Astor Place in lower Manhattan, via Dazed, to protest the fact that the social media giants still censor breasts and female nipples.

Yes, several years after the rise of #FreeTheNipple we are still talking about this! Since the outcry over Facebook and Instagram's rigid nudity policies reached a fever pitch a few years ago, the sites now consider context to some extent when removing photos. However, nudity is fundamentally still banned, and artists continue to have their work taken down.

Facebook's guidelines read, "We understand that nudity can be shared for a variety of reasons, including as a form of protest, to raise awareness about a cause, or for educational or medical reasons." However, the site still censors "uncovered female nipples except in the context of breastfeeding, birth giving and after-birth moments, health-related situations... or an act of protest."

Sunday's protest was specifically intended to challenge how Instagram and Facebook's rules hold back artists who work with nudity. It was co-organized by Tunick and the National Coalition Against Censorship's #WeTheNipple campaign, which fights to protect artistic nudity online, and to make social media guidelines more artist-friendly.

"The work I'm allowed to post is fundamentally different from the work I make," Tunick said in a statement. "To me, every pixelated nipple only succeeds in sexualizing the censored work. As a 21st century artist, I rely on Instagram. It's the world's magazine and to be censored on it breaks my spirit."

The NCAC published an open letter addressing Facebook and Instagram. In it, they argue that the sites "imposes the beliefs of some Facebook users on the entire world, stifles artistic expression, and enforces gender discrimination by permitting images of male nipples while prohibiting female nipples."

The letter points out that, given the critical platform for rising artists Instagram and Facebook have become, the ban is increasingly "punishing for photographers, and particularly harms artists whose work focuses on their own bodies, including queer and gender nonconforming artists."

NCAC has called for Facebook to "convene a group of globally representative stakeholders including artists, art educators, museum curators, activists, as well as Facebook employees, to develop guidelines that transparently balance the competing interests of the many different communities Facebook serves."