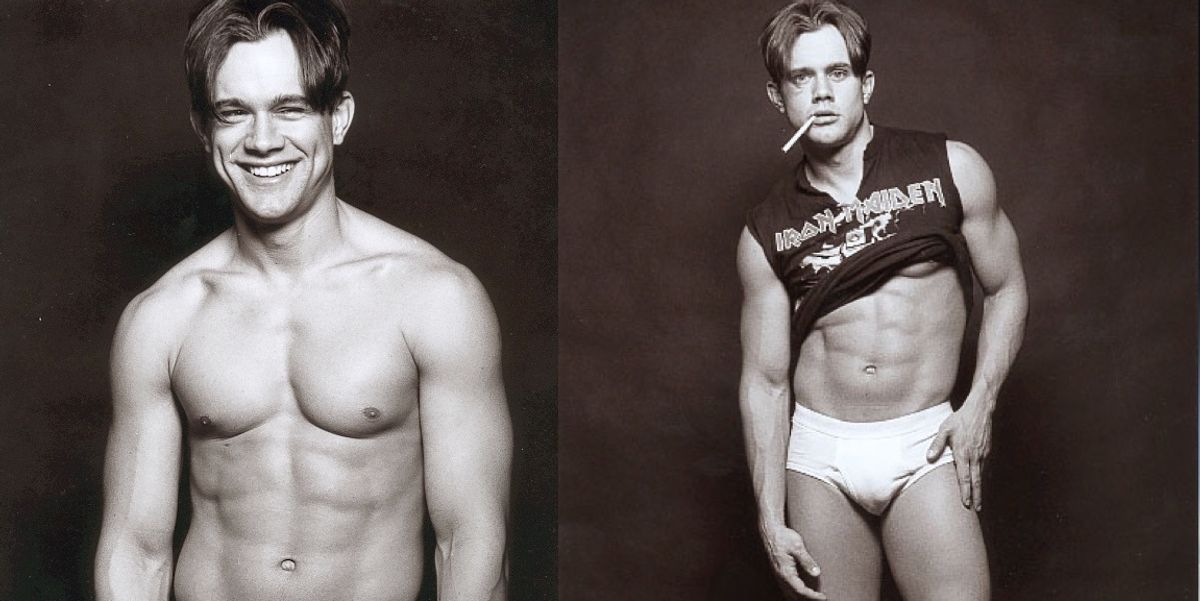 Hi, Mark. Tell me how you came to New York.

I grew up in a Southern Baptist home in Texas. I was into weird things—art, music, sci-fi, Mad magazine, Blondie. I checked out art books and stuff about the Soho art scene. I read that Edie book about Edie Sedgwick. As a child, I learned about all these things---I was always studying New York, always paying attention to the key figures. In the late '80s, there was Dianne Brill, John Sex, Ann Magnuson, you, Lydia Lunch. It seemed if you wanted to be successful, you went to New York and became part of a downtown scene and then you could take it to the next level. The goal was to come to New York and meet Andy Warhol. But then he died and Madonna became the abstract Andy Warhol in a way.

Did you get to meet Madonna?

Yeah, one time. She was at the Roxy to deliver her 12-inch single, "Deeper and Deeper," to DJ Frankie Knuckles. She came up to me and asked me to come to the audition for the Girlie Show tour for the Erotica album. She said, "Are you Mark Allen?" I was shocked. I remember her red lips saying my name. I wish someone had taken a photo. How did she know who I was? Years later, I was working the door at Sound Factory Bar for Frankie Knuckles and Rob Fernandez, and I told the story. Frankie said, "Yes, I know. I told her to go talk to you."

Did you go to the audition?

Yes. I thought since she'd talked to me, it was going to be this meeting of the minds where she'd consider featuring me in a sequence in the tour and turn me into a huge star. Instead, it was a mob scene of professional dancers. A cattle call. They put numbers on our shirts and the choreographer took us in groups and was screaming stuff like, "Do a pirouette!" Everyone knew what a pirouette was but me. I was like that girl at the beginning of the movie Fame who bombs the audition. It was hilarious. I saw Madonna for a moment at the end of the giant room, sitting at a table, behind a sea of handlers. She was wearing all pink. I remember I bumped into Candis Cayne (as a boy, as Brendan) outside the audition afterwards. We were friends in the East Village back then. I was like, "What are you doing here?" and he said, "I crashed this audition." When he asked what I was doing there, I bragged, "Madonna asked me to come." And he kind of looked me up and down. We didn't get the gig!

Aside from your Madonna encounter, what did you really do when you got to NYC?

When I first came to New York, I had a 9 to 5 job, then I joined ACT UP and was going to demos and getting arrested. I could finally come out of the closet. In Texas, I was out to a few people. I came out to my family four times before it stuck. But now I was in ACT UP and I helped wrap a giant condom over Jesse Helms' house. I was also part of a radio collective. I shared a show on WBAI. I decided to do a show on gay nightlife. I took a tape recorder to all the clubs and interviewed people like Chip Duckett, Julie Tolentino, Michael Alig, and Linda Simpson. That's how I met many of these people. It was [gay promoter] Marc Berkley that got me started go-go dancing. I was dancing at Limelight in 1992. I had my shirt off and all these people were paying attention. I knew Marc from ACT UP. He said, "Oh, Mark, you should dance for me." I had hairy legs and purple short-shorts from Patricia Field and I was really nervous. After, I went into Marc's office and said, "Look at all these tips I made." It was, like $40." [laughs] He said, "Oh, that's great." He pulled out this wad of bills. It was $150. I thought, "Wait a minute, I get paid all that money—plus the 40?" That was more than a week or two's pay at my 9 to 5 job when I first moved to New York.

Did you feel sexy dancing and being ogled?

Yeah, I think so. I had a shy personality back in Texas. I was coming out of my shell.

Was there a down side to go-go dancing?

The usual stuff. It seems big headed, but when you're seen in that light, you become kind of isolated. You don't have any friends, even though people think you're popular. I was having a lot of sex, but I didn't have a lot of friends.

Did you get caught up in booze and drugs?

No, I didn't. I always was very sober. I might have been afraid of drugs (I tried almost everything except heroin and meth, but never did anything regularly), and I never really drank because I had to keep in shape. It was always a bump here, a bump there, always offered, never bought. I honestly never really liked the way drugs made me feel.

Were the other guys supportive or jealous?

Jealous, mostly. When I started to get really popular, things started to go dark a little bit. There was a weird moment at the Roxy—there's always a war between the gay and straight go-go boys. At Roxy, there was a contingent of straight Jersey guys who looked like Jon Bon Jovi and clapped their hands like Chippendales dancers. I developed a style where I'd lay down on the box and I'd look at people. They approached the manager, Jason, and said I shouldn't be paid as much or work there at all. Jason said, "We're not gonna do that. He's our biggest draw!"

You're smarter than most go-go boys. I'm not stereotyping them, but some of them have learned to coast on their looks whereas you happen to have developed quite an intellect.

I guess so. Thanks for saying that. After I stopped dancing, I went on to be a writer. I wrote for the Times and was on NPR's All Things Considered. I suppose that makes me smart, I don't know. My go-go boy fame followed me everywhere. They put a bio at the end of my first Times article. "Mark can also be heard on…" Well, an old gay guy in the office said, "It would be really funny to add 'And he was New York's most famous go-go boy'." I called later and said, "Take it out." In 2013, I did Robin Byrd's stage show at the Cutting Room. She said, "Mark Allen" and they cheered. She said, "He's gonna do a poetry reading"--and everybody went "Boo!" And then she said, "But it's about his ass," and everyone went "Yay!!!!" It follows me around.

At the height of your dancing gigs, did any older man try to control or own you? Aside from Marc Berkley? [laughs]

But Melania's an old whore. [laughs]

I think it's too late for me, at least. I'll let it go. But I think being a kept boy, if you can maintain it till middle age, is a good thing. You inherit the guy's money.

If someone today got an offer to be a go-go boy, would you say, "Go for it"?

Of course. But the world was different in New York—everything was tactile and you had to go out of your apartment and do things in the real world. Now everything's online. I'd say go on Instagram. Show your ass there.

But how would you make money from that?

I have no idea. Prostitution.

It all comes back to that.

By the time I stopped dancing, it had changed a lot. I went to the Cock and guys had boners and guys would suck their boners for a dollar. I'd never do that.

When you did you stop dancing?

After four years. I was diagnosed with testicular cancer. Right when everything was beginning to peak for me, I had this pain in my groin. I was traveling. Boston, L.A., Germany, Japan. I had this pain in my crotch for three months, but I had obligations and also I was misdiagnosed. I ended up at Sloan Kettering, where they said, "You have cancer." They caught it too late. It had spread to my lungs. My life was swimming in cash and endless boys and now everything reversed and I had cancer, and afterwards I had a nervous breakdown. It was kind of a silver lining because a lot of people I knew in clubs kept doing it and didn't know when to stop, but I had a clear point. After that, I got my life together. I was only 26 when it happened. My life completely reversed. I fell into toxic friendships and I gained weight. Someone said, "Didn't you used to be Mark Allen?" Then I got on the Internet and I had a web cam and my site got popular, and I got in shape again. That's how I got discovered by NPR and the Times, and I started doing standup and monologues.

When you're gay in the 90s, everything was "Use condoms." It was surreal when they told me I had cancer. You're gay with cancer, you're kind of twice removed—you don't have AIDS, you have cancer. I must say Randy Gross—a nurse, who performed in drag as Randella--came to my aid and helped me a lot.

Did they remove a lung?

They took out part of my lung and one of my testicles. I survived it. It was quite curable, even though they caught it a little late. I thought, "Why did it happen to me?" I felt like my career was leading to bigger fame. I was corresponding with [filmmaker] Gregg Araki and I couldn't do his movie because of the cancer. But I realized if I'd known I was gonna have cancer at 26, I never would have moved to New York. I would have been terrified. I remember when one gay magazine in San Antonio wrote, "Mark Allen was dancing and his bulge was so huge." I felt like writing back, "That was a tumor." [laughs]

Tell me about Sock Job.

I thought it would be done quickly, but it's taken years to complete. It's over half-finished. In its current state, it's nearly an hour long. It will eventually be feature length, and should be done soon. I work on it a little every day. It's the hardest thing I've ever done. [Another go-go icon] Matthew Camp has been a dream to work with.

Best of luck with it, and thanks for sharing your story.