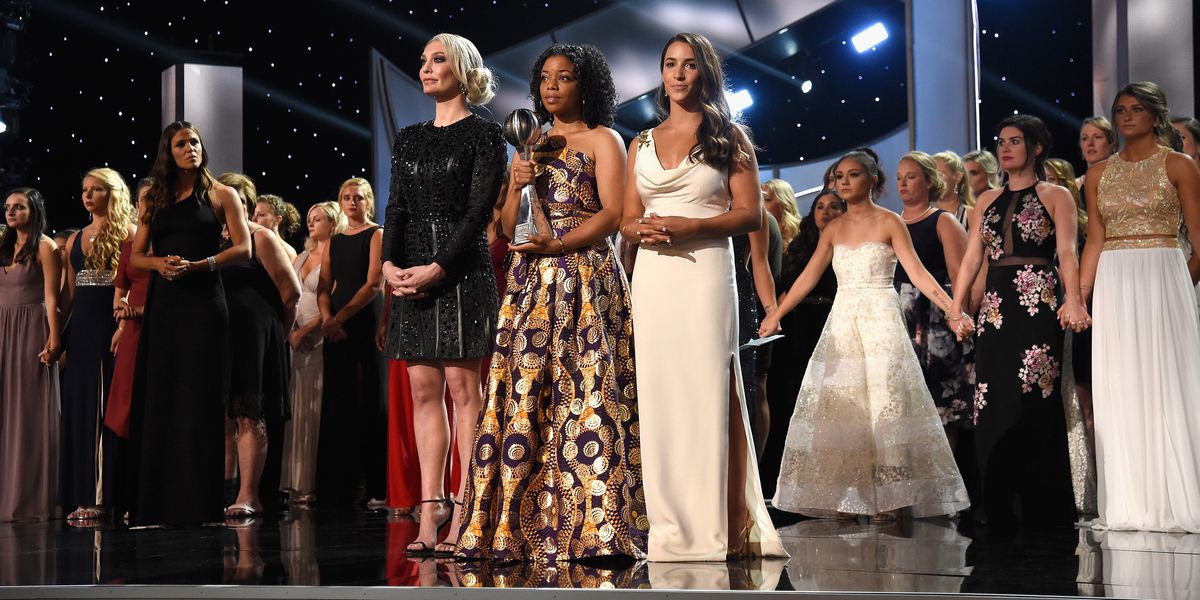 Over 100 women united on stage at the ESPYs — the Excellence in Sports Performance Yearly Award, sport's most prestigious ceremony — to receive the Arthur Ashe Courage Award, presented by Jennifer Garner. What the women had in common was the fact that they each survived the abuse of Larry Nassar, the former team doctor for USA Gymnastics and Michigan State University, who has just been sentenced to 40 to 175 years in prison for rampant sexual misconduct, after 140 athletes testified about decades of abuse.

Speaking for the group of women were Olympic gold medalist Aly Raisman, softball player Tiffany Thomas Lopez and former gymnast Sarah Klein, who said she was Nassar's first victim 30 years ago. Together, as Klein stated, represented a "portrait of survival, a new vision of courage" while delivering a powerful speech that rammed home the importance of believing survivors.

Recognized for bravery that "transcends sports," the trio detailed the abuse and harassment they suffered at the hands of Nassar. Taking the stage to a standing ovation, here is the full transcript of their speech, below:

Sarah Klein: It's a privilege to stand up here with my sister survivors as we represent hundreds more who are not here tonight.
Make no mistake — we're here on this stage to present an image for the world to see, a portrait of survival, a new vision of courage.

The abuse of Larry Nassar began 30 years ago with me. For 30 years, people at the United States Olympic Committee, USA Gymnastics, and Michigan State University all placed money and medals above the safety of child athletes. Thirty years, until the work of Detective Lieutenant Andrea Munford of the Michigan State Police Department and Andrea Povilaitis, the assistant attorney general who prosecuted the case, finally putting our abuser away for life.

Speaking up and speaking out is not easy. Telling our stories of abuse, over and over and over again, in graphic detail, is not easy. We're sacrificing privacy, we're being judged and scrutinized, and it's grueling and it's painful, but it is time. As a mother, I am here to say that we must start caring about children's safety more than we care about adults' reputations. And as a survivor, I'm here to say that if we just give one person the courage to use their voice, this is worth it. If one more victim of sexual abuse feels less alone tonight, then our suffering has meaning.

Tiffany Thomas Lopez: In my sport, softball, we typically measure ourselves with with wins and losses. Well, the amount of loss is almost immeasurable. Tonight, we stand here, and it feels like we're finally winning.There are a lot of conversations in our society that we tiptoe around as if they're something to avoid. I know in my life, people have looked that way at two issues extremely personal to me: race and sexual abuse. Sexual abuse claims victims in every race, showing no discrimination. Just like Arthur Ashe, I stand so very proud representing not only minorities, but all of us as humans, the human race.

I encourage those suffering to hold tight to your faith, and stand tall when speaking your truth. I'm here to tell you, you cannot silence the strong forever.

This past January, Judge Rosemarie Aquilina showed a profound level of understanding by giving us each an opportunity to face our abuser, to speak our truth, and feel heard. Thank you, Judge, for honoring our voices. For too long, we were ignored, and you helped us rediscover the power we each possess. You may never meet the hundreds of children you saved, but know they exist.

The ripple effect of our actions, or inactions, can be enormous. spanning generations. Perhaps the greatest tragedy of this nightmare is that it could have been avoided. Predators thrive in silence. It is all too common for people to choose to not get involved. Whether you act or do nothing, you are shaping the world we live in, impacting others. All we needed was one adult to have the integrity to stand between us and Larry Nassar. If just one adult had listened, believed, and acted, the people standing before you on this stage would have never met him.

Too often, abusers, and enablers perpetuate suffering by making survivors feel their truth doesn't matter. To the survivors out there, don't let anyone write your story. Your truth does matter. You matter. And you are not alone.We all face hardships. If we choose to listen and we choose to act with empathy, we can draw strength from each other. We may suffer alone, but we survive together.