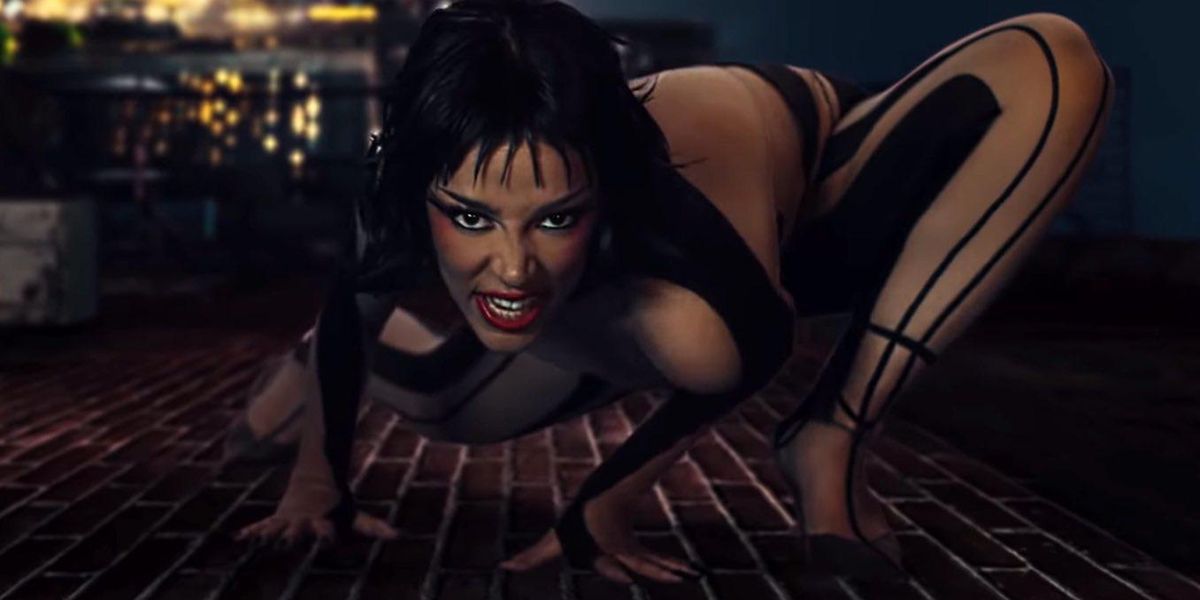 Doja Cat Transforms Into a Tarantula for 'Streets'

Doja Cat's phenomenally sexy "Streets" — that inspired countless #SilhouetteChallenge videos — has received a reality-bending music video. It's best to describe this in sections because, man, does it get wild. You'll want to approach this one ready to be bewildered, excited and... potentially scared.

The video starts off with a traffic jam in which an impatient cab driver has to wait at a light before he can get to his fare. He decides to look over into the window and sees Doja Cat behind the glass, and he begins to fantasize about being with her as she moves around gracefully.

His fantasy becomes some kind of twisted world where he actually ends up in a room with Doja Cat as she does the #SilhouetteChallenge. He's living the dream being serenaded to and performed for, and we're led to believe that this will have a happy ending — but only, it doesn't.

Before we know it, Doja Cat is freed from what was potentially a glass prison because she starts to dance on top of a cab while zombies come from the ground. To make it even wilder, the cab driver is one of those zombies who seems angry that he's been bamboozled into potentially trading his life for Doja Cat's performance.

When the scene shifts again and we follow Doja Cat crawling up a building like a massive tarantula, we see the cab driver has returned to being a human again — but he's not safe. He's wrapped up in Doja Cat's massive web, destined to forever be her play thing in some sick, twisted game of love.

The video ends after she gets blown to smithereens in a nuclear testing site and the cab driver, back in reality, returns to his regular view. Doja Cat is revealed to be in the back seat and is anxious to get to where she needs to be.

What really happened? Is the cab driver still dreaming? Is Doja Cat really a massive tarantula in human form? Were the zombies innocent guys that she transfixed with her performances before? So many questions, so few answers.

Maybe Doja Cat will expound upon this video's concept during the Grammy Awards this year where she's set to perform, as recently announced. Cardi B, Taylor Swift, BTS and more will also take the stage.

Check out Doja Cat's extremely sexy "Streets" video, up above, and stream Hot Pink, below.