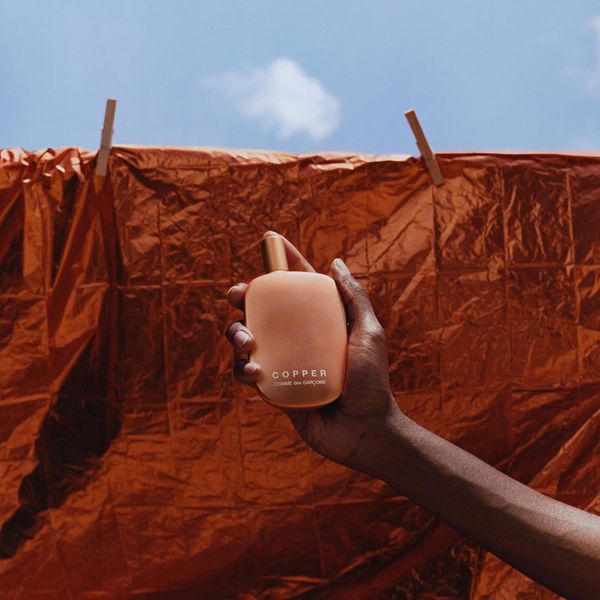 Comme Des Garçons has dropped its latest fragrance. Called Copper, the spicy new scent is housed in its signature pebble bottle designed by Rei Kawakubo. The fragrance, infused with notes of galabanum, peppercorns, Madagascan gimger, vanilla, and myrrh, is further accompanied by a stunning campaign shot by Tyler Mitchell.

Opening with a set of different hands grabbing each other, the video champions Black and Brown skin tones — also something that's at the heart of Copper, which is described as an "olfactive exploration of perceived differences and their harmonious alignment."

"I wanted to visually link the idea of copper — a material typically perceived to be cheaper than gold — to the idea of black and brown skin and richness as a way of elevating the two," Mitchell wrote on his Instagram. "This was my first time doing a campaign top to bottom. From the research and creative direction, to directing the film, shooting photographs and logo placement and layout. I'm so honored it could be with Comme Des Garçons."

Mitchell has been on the forefront of diversity in fashion. The young creative originally shot to fame after being handpicked by Beyoncé for the September 2018 cover of Vogue. The photographer made headlines for becoming the first African American to shoot the magazine's cover. And with this new campaign, it seems the Parisian label set to make itself part of the burgeoning conversation around inclusivity in beauty, too.