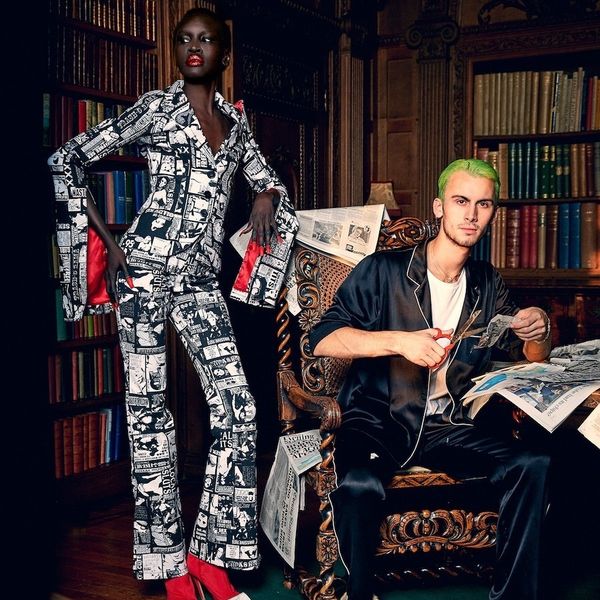 Last night, 10 finalists were announced for the 2018 CFDA/Vogue Fashion Fund. The annual program (which celebrates its 15-year anniversary this year) is focused on providing mentorship for budding American designers. Often because of their emergent status, the names on each year's roster are unknown outside of fashion circles. You can learn more about this year's CVFF contestants, below.

Atlanta, Georgia-native Emily Adams Bode grew up antiquing with her mother. After studying menswear and philosophy at Parsons and Eugene Lang College in New York, Bode launched her namesake brand to archive antique textiles through menswear. Since her debut in 2016, familial story telling has been central to her collections.

Upon graduating the London College of Fashion, British-born, New York-based designer Christian Cowan's joyful, maximal aesthetic (with irreverent touches) caught Lady Gaga's attention. Since dressing the star in a glittery pink ensemble, Cowan's fanbase has grown to include Halsey, Miley Cyrus, Paris Hilton, and Cardi B — who wore a checkered black and white jacket by the designer on the cover of her Invasion of Privacy album.

Danielle Corona's accessories label Hunting Season gets its name from the hunting parties hosted on English manors. In keeping with that traditional bent, Corona works closely with Colombian artisans and Italian craftspeople to preserve craft in her collection of angular handbags. Before establishing her brand in 2006, Corona worked at the Valentino accessories studio in Rome.

Jonathan Cohen launched his namesake brand in 2011 with a tightly edited range of cocktail dresses. Seven years later, the designer and his partner (in business and life) Sarah Leff have evolved the collection to a range of suiting, daywear, and nuanced dresses. The duo's expanding the list of stockists include Ikram in Chicago and Dover Street Market New York.

Matthew Adams Dolan was born in Massachusetts, but relocated with his family to Sydney, Australia as a child. Despite living abroad for years, Dolan never lost touch with his American heritage (which by the way boasts John Adams as an ancestor). With an quilting and needlework enthusiast for a mother, Dolan stayed connected to American craft traditions. In 2014, he launched his namesake brand, an assortment of reinterpreted American staples from cable knit sweaters to denim daywear.

Kirby Jean-Raymond established his ready-to-wear brand Pyer Moss in 2013 with menswear. The designer showed his first range of womenswear this February for fall 2018. Focused on stimulating conversation around activism, art, theater, and more,Jean-Raymond often approaches tough topics in his collections (before his fall 2015 the designer played a video about police brutality and the black community). From focusing in on his immigrant father's life journey to telling untold histories of American people of color, Pyer Moss is a medium for social commentary.

Rebecca de Ravenel was raised between Paris and The Bahamas. As a result, her namesake jewelry collection fuses Caribbean colors and motifs with metropolitan sensibilities in proportion and materials. Since launching her first range of earrings called "Les Bonbons" after the French term for confectionaries, de Ravenel's jewelry became a go to for chic beach-goers.

New York-based Australian designer Scosha Woolridge is a world traveler. Her trips through the Middle East, North Africa, South Asia, and South America inform her collection of women's, men's, and children's jewelry. Woolridge's signature bracelet — made of braided nylon and shapes cut from sterling silver and brass — was inspired by her travels through India as a child. In addition to costumes styles, Scosha also has fine jewelry and bespoke services.