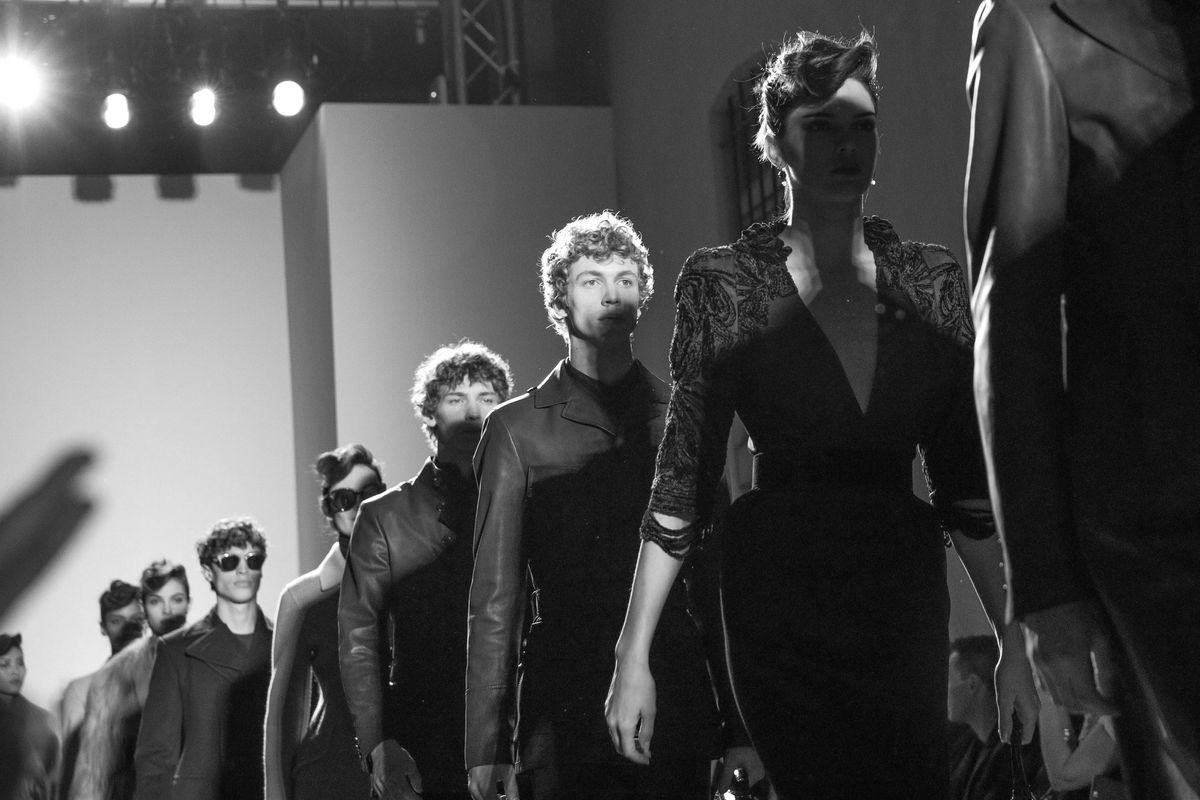 With the final swish of an Armani gown this afternoon, the Milan fall season comes to a glamorous close. From Prada's inscrutable bedroom beauties to Gucci's bold barnstormer, and a red carpet firestorm (or two) the Italians, true to form, did it their way. Herewith, we recount the molto highs and basso lows of the week:

The Fendi collection was lovely to be sure, but the real news was an interview Signor Lagerfeld gave backstage after the show to WWD that had the red carpet industrial complex falling all over itself. In a J'accuse against living deity Meryl Streep, Lagerfeld claimed she reneged on a Chanel couture dress for last night's ceremony in favor of another designer purportedly willing to pay—a practice not uncommon between brands and celebrities, but La Streep? He has since backed away from the claim, but in updated stories from the fashion trade, Meryl has a lawyer "investigating her options" for defamation. Even if the claim has indeed proven meritless in the press, something tells us Meryl will not back down until she has the final "That's All" and her name is as clear as a lucite heal. Wonder where Lagerfeld picked up this sudden notion of alternative facts….

The Dolce & Gabbana show is always something of a ruckus affair, and this season set a new bar. The designers packed the runway with loads of social media stars, models, actresses, generations of women they've dressed through the decades and even some royalty. And in keeping with the authentic atmosphere of famiglia, the "models" styled themselves with pieces from Dolce's past and present which made for a kind of family album the audience could scroll through in real time. The effect was joyous, heartwarming and unabashedly sentimental, a feeling often missing in the traditionally cold and commercial Milan shows.

Honestly when is Anna Cleveland not doing the most? And we would have it no other way. If you could sell tickets to a fashion show (which is an inevitability, tbh) any one with Cleveland The Younger would be a guarantee sell-out. The model progeny of runway legend Pat Cleveland inherited her sense of movement and drama that some wise designers use to great effect on their catwalks. This season for Jeremy Scott's Moschino, she hammed it up in a red curtain dress—Scott's take on the current rage for upcycling—and in the process upstaging none other than Kendall and Gigi.

Prada In The Bedroom

The manifold interpretations of the latest Prada collection from any season are part of its enduring allure for the fashion intelligentsia, and this season did not disappoint. According to Ms. Prada she was revisiting the conundrum that a woman is not allowed to be intelligent and interesting yet at the same time seductive. It seems that if she did not resolutely answer the question, albeit on purpose, she raised the argument to the highest of sartorial arts. Discourse aside, if you are pining for the early-aughts days of flared corduroys, you're in serious luck!

In a fashion show for the ages, Alessandro Michele presented his strongest collection for Gucci to date in a marathon passage of nearly 120 looks on guys and girls in his glamorously gilded geek chic. From chain mail to message tees (scrawled with the imprimatur of artist Coco Capitán) his diversity was only matched by his clarity: Everyone is welcome with something from everyone. If you can't find something to like in one of those more is more looks there is really no hope for you.

"In five minutes all of us will be in another place... so I want to say something before we part. I feel the need to recognize that in a time of uncertainty there is a bond between us that can keep us strong and safe: the bond that unites those that respect the human rights of all. Please join me and my family on this catwalk. Let's show the world that we are united and fearless." - #AngelaMissoni, 25 February 2017 @missbrunello
A post shared by Missoni (@missoni) on Feb 26, 2017 at 7:44am PST

How fantastic is it that the ruling families of Italian fashion are mostly matriarchies: The Fendis, the Prada-Bertellis, for the last 20 years, the Versaces, and of course, the Missonis. So it was fitting that Angela Missoni made ingenious use of her family's signature zig zag knit to put her spin on the ubiquitous pink "pussy hats" that are now an enduring symbol of the Women's March and the ever-evolving resistance movement. If there was any questions as to what one wears to a protest, consider it all sewn up.

The Model Is Present

When one thinks of Naomi Campbell at Milan fashion week, a vision of the catwalk goddess sashaying in some slinky number to blasting runway music is usually conjured. But at the Tod's runway show, attendees were greeted at the door with Ms. Campbell and other lithe creatures as part of artist Thomas De Falco installation Wrapping which depicted a white washed interconnected root system with models tied and wrapped together. The level of otherwordly zen and calm she exuded was no doubt the envy of weary editors and fashion folk who are smack dab in the middle of the fashion month marathon.

Thank you so much @maxmara for the opportunity of a lifetime ❤️ what an honor to walk for you in Milan Fashion Week!🎉
A post shared by Halima Aden (@kinglimaa) on Feb 23, 2017 at 6:03am PST

One of the most exciting casting stories of the season is Somali-American, Halima Aden. After being cast in the latest Yeezy show in New York and championed by the likes of Carine Roitfeld, the 19-year-old Minnesota native has walked in Alberta Ferretti and Max Mara this week in Milan with no doubt more runway passes to come. It is hard to overstate the impact of a hijab-wearing model on the runways of the RTW collections in these fraught political times, but it begs the question perhaps…why did it take so long?

The news that the beloved designer and spiritual force behind Marni, Conseulo Castiglioni, would be stepping down last October was met with sadness and trepidation about the future of the label. But have no fear, Prada veteran Francesco Risso offered a strong, if comfortingly Marni-quriky-luxe, vision for the brand. In his official runway debut he ticked most of the boxes that the Marni woman has come to depend on: chic but boxy silhouettes, shaggy faux fur, and psychedelic prints, to name but a few. This outing bodes well which should come as no surprise as he learned from the best in town.

In a poignant end to the week, family, friends and a who's-who of fashion gathered at the Duomo di Milano on Monday for a memorial mass—a private funeral had been held on December 24th—in honor of Franca Sozzani, the late EIC of Vogue Italia and iconoclast of fashion who passed away at 66 on December 22nd after a battle with lung cancer. The Catholic ceremony included readings by her son, Francesco Carrozzini along with editor, long-time Vogue Italia colleague and niece, Sara Maino. The loss of Sozzani is immeasurable given her legendary carte blanche to the artists and photographers she collaborated with at her title and her flouting of norms and taboos that most editors in her position wouldn't dare challenge. She was as much beloved as she was confrontational. It was a grand and fitting farewell in the most beautiful space in the city whose artists she did so much to champion.