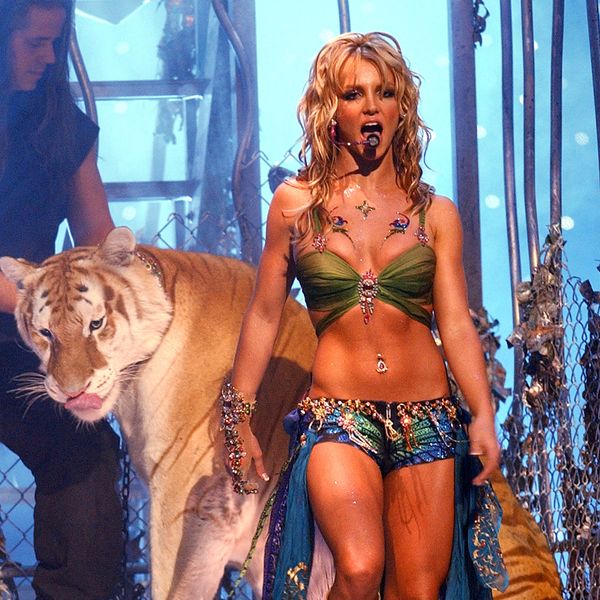 It's the 2001 VMAs. Britney Spears' career is peaking, fresh off the release of her eponymous third album, a huge Pepsi deal and a Forbes' world's most powerful celebrity ranking. She hasn't discovered Marxism or front-facing selfie home runway videos, or even married Kevin Federline yet. No one has ever heard of coronavirus or Netflix. People are allowed to go outside. Brit appears on the stage in a large metal cage, which mechanically rotates to face the audience.

"I know I may be young/ But I've got feelings too/ And I need to do what I feel like doing/ So let me go," she coos, leading off "I'm A Slave 4 U." Behind her, a muscle shirted man with flowing long dark hair strokes a huge tiger. She exits, and goes on to make one of the decade's most memorable visual statements, to the horror of PETA.

This Tarzan-type is none other than cult Netflix series Tiger King's resident cult leader Bhagavan "Doc" Antle, mentor to the show's star, Joe Exotica. Antle, who runs a wild cat park in Myrtle Beach, is painted as a slicker and more malevolent version of Exotic. Antle is the show's unsung villain: he doesn't kill anyone or try to, but he does staff his park with a harem of underpaid and overworked female employees, some of whom are coerced to sleep with him and get breast implants. Hate to say it but he looks… good?

On-camera, Antle brags about having worked as an animal trainer on "hundreds" of movies like Ace Ventura: Pet Detective (there are ten listed on his IMDB page) as well as bringing tigers onto Jay Leno and David Letterman. Given Britney was in her exotic animal phase and his proximity to show biz, it made sense they crossed paths. According to Screenrant, Antle also provided animals for music videos by the likes of P. Diddy, Ashanti and Janet Jackson.

The photos of Britney posing with Antle began circulating on Twitter this weekend, but now, another mystery has emerged, thanks to PAPER columnist Evan Ross Katz, who shared a photo that appears to be of Britney Spears hanging out with another Tiger King star.

At the 2002 VMAs, Britney sits next to a blonde lady in leopard print who closely resembles the potentially murderous animal rights advocate and queen of "cats and kittens" herself, Carol Baskin. That really you, Carol? Could the animal rights advocate have been a guest invited by Britney herself as a PR stunt to ward off the PETA militia that came for her after the python performance? Is that a completely different blonde who neither starred in Tiger King nor murdered her husband and fed his body to tigers? Has this goddamn show ruined all our lives? Stay tuned...