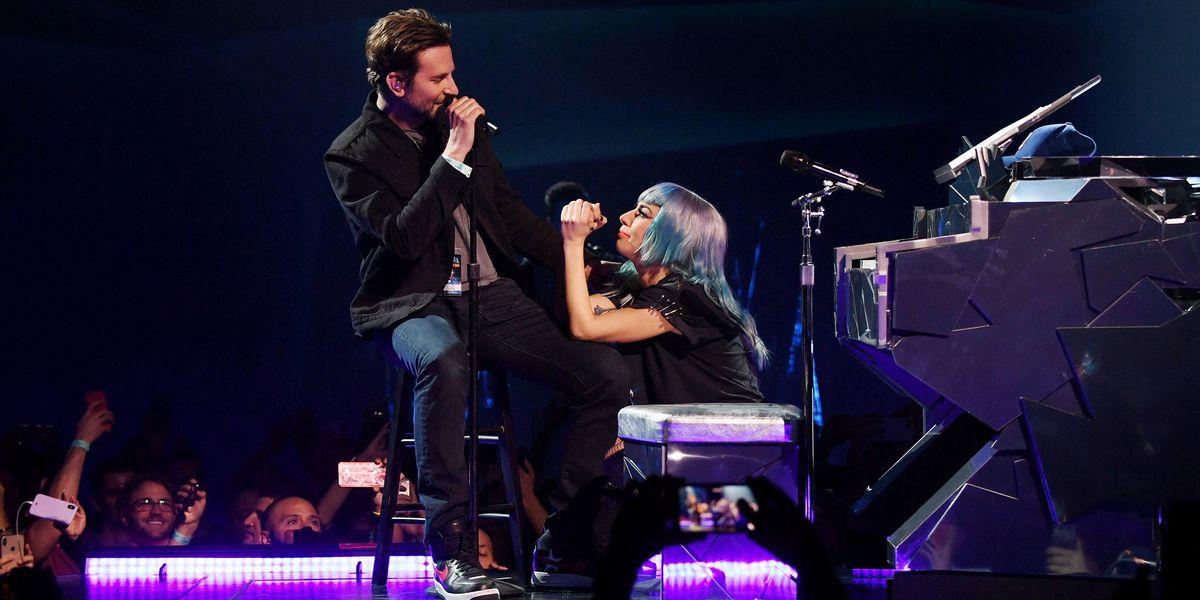 If you've ever had any shadow of a doubt as to whether Bradley Cooper could actually carry a tune, the actor cleared things up with his performance on Saturday night. The director and Jackson Maine to Lady Gaga's Ally in A Star Is Born proved he's got the chops, and can hold his own on a concert stage when he — as a surprise to the audience — joined Gaga onstage at the Park MGM in Las Vegas for her residency show Enigma.

This marked the very first time the duo ever sang the song "Shallow" together live. (Gaga had previously sung it during Enigma's premiere. ) This was all captured on video, and you immediately notice how Cooper doesn't exactly feel at home, and looks a bit awkward compared to Gaga who has been living for live concerts and performances. But the singer made sure to make him feel as comfortable as possible, greeting him with a long hug. She was also prepared, and told the actor, "I even got you in-ears." To which the actor replied, "Jackson never used these."

Before Cooper sat down by the piano, Gaga also gave him a kiss on the cheek. And as he sang his solo verse, the pop star knelt beside him in support — and, well, dramatic effect. It was beautiful, and definitely a big deal to A Star Is Born stans in the audience, and on the Internet.

Bradley Cooper came on stage to sing Shallow with Lady Gaga during the Enigma Show. I’m not crying, you are. 😭💙 pic.twitter.com/LCz8FYL4Et

When you show up to see the goddess @ladygaga and you get to hear Shallow performed with Bradley Cooper...it's a pretty extra great night in #Vegas. Enigma blew my mind. Gaga gave absolutely everything she had in this show. Spectacular and worth the trip! pic.twitter.com/ZltjtDHtFg

The on-screen couple took their dream duet from the movies to reality, and, really, it's everything fans could have asked for. Thank you for blessing our lives, Mother Monster!