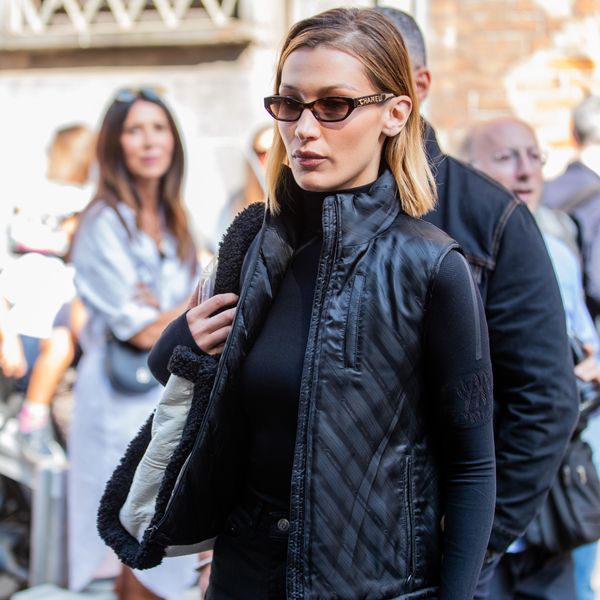 We love Commission, a chic, rising New York label that draws inspiration from styling in East Asia in the '80s and '90s (their latest lookbook was inspired by the designers' upbringings in beach towns like Busan, South Korea and Nha Trang, Vietnam). Designers Jin Kay, Dylan Cao, and Huy Luong make sleek, thoughtful clothing. And so it makes sense that they now have a major celebrity fan: Bella Hadid.

Hadid was photographed outside of the Spring 2020 Etro show in Milan while sporting a black vest from Commission's fall 2019 collection, pairing it with small Chanel sunglasses. As per Luong's Instagram story, the paparazzi also caught Hadid in a camel-colored collared jacket with an elastic waist, also from Fall 2019. Hadid posted the look to her own Instagram, posing in front of her Missoni campaign with Alton Mason and Adut Akech.

In a February interview with PAPER, Kay described the fall collection, saying that "the silhouettes became a little more feminine, and the fabrication became more fluid. Silhouettes are elongated, and jackets are more shrunken."

Hadid — who works with a stylist, Victoria's Secret Angel favorite Elizabeth Sulcer — is famed for her model-off-duty style. She tends to favor trendy vintage, like Vivienne Westwood corsets and Jean Paul Gaultier mesh tops, alongside hip designers like Virgil Abloh. And she loves a '90s or early-aughts-inspired moment, making Commission a fitting choice.

"Even when I was a kid in high school, style was always my thing," the supermodel told Harper's Bazaar last year. "I never wore flip-flops, I always had my cute outfits, I went vintage shopping. I never bought designer fashion until I could actually afford it when I turned 18. So I had to find the cheapest, but cutest things. My sister Alana once bought me this major Betsey Johnson lace and plaid skirt — it was the love of my life. I had all my doc martins — I had style. And I'm so fortunate now I have my designer pieces — like I'll buy a Balenciaga coat and I'll pair it with something vintage."

She continued, "It's crazy because I was never one to put outfits together for people to see me. But now of course I walk outside and photographers are outside my apartment. So now it's a fun thing. I look at it, instead of being like f— this, I can show what I'm really made of."