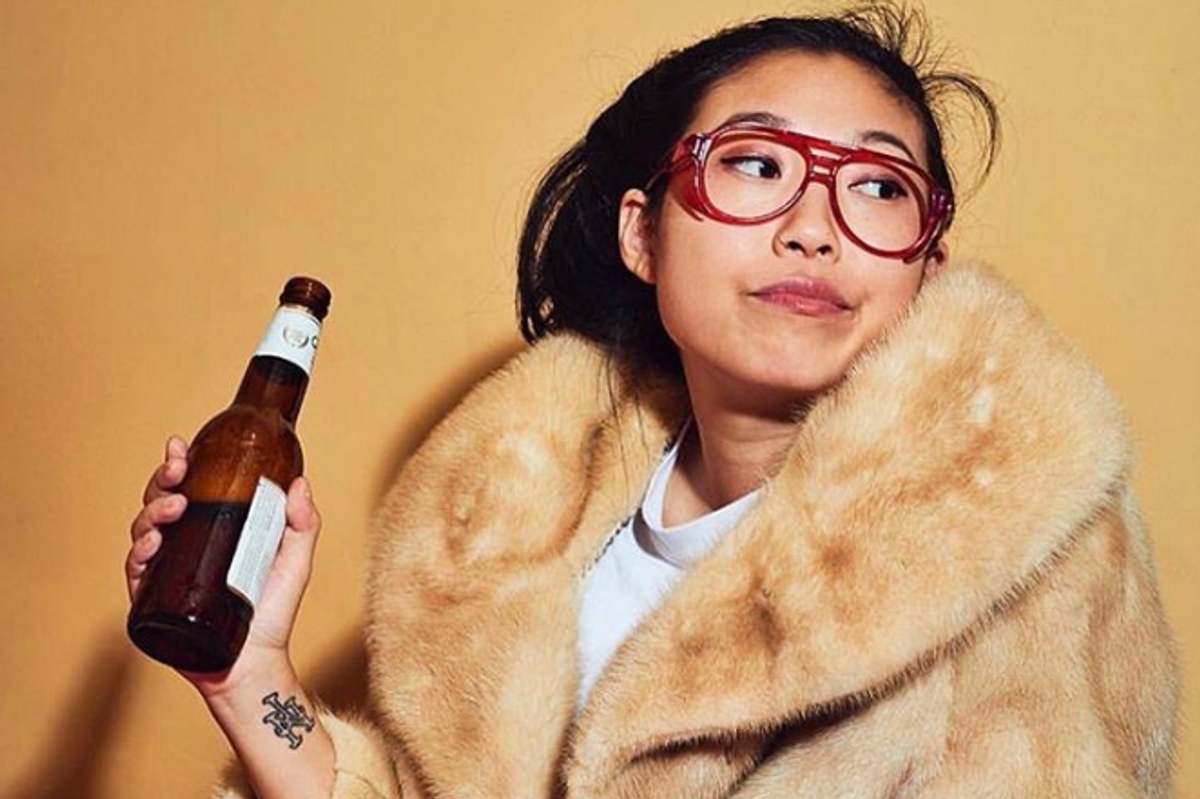 She's also damn funny. Funny enough to go viral off a song titled 'My Vag'. Funny enough to star alongside Cate Blanchett, Rihanna, Sandra Bullock and every other A-List actress to ever leave the womb in Ocean's 8. Funny enough to host her own Astronauts Wanted-produced talk show on Verizon – the fifth season of which premiered last night.

We sat down with the whip-smart quadruple threat to talk follow-count, waking-up like Furby and why fifteen minutes of fame is way overrated.

Dude you have your hands in so many pies I don't know where to begin. Let's start with Ocean's Eight. How was that whole experience?
That sounds hot! I feel like I've had a lot of experiences in my life and Ocean's 8 was the coolest. Basically it was a dream come true. It was a dream. They took a chance on me.

I love that we're seeing this rise of women-driven comedy hitting the mainstream.
Yeah! Women can be funny. We can do the same thing. I think for Ocean's I can't imagine anyone not wanting to see that movie, I mean just the cast.

I know right the gang's all there. Was that intimidating as hell?
Yeah, definitely before. I was having waking nightmares that I would say something weird and creep them out, but they're literally just your coworkers and they were so warm and welcoming. I think music is something I taught myself and it's a passion, but with the comedy I'm very confident in that because I've had it for a really young age. I didn't feel extremely out of place because I knew I could do my job with that.

I mean we keep hearing there's been a real shift in comedy, in terms of making more room for women. What do you say to that?
Well first it was that stand-up was male-dominated and then it was the wage gap but most importantly it was 'can women be funny?' which was an actual article in an actual magazine written by a man. I think the message of the whole industry is that we're very open, it's a PC culture, it's not 'cool' to outcast women or minorities. It's not a trend.

That's interesting that you should say trend, you don't inclusiveness has become a trend?
I think that it can be, you know you'll see an Asian in every movie as a random cling on.

Like ticking a box.
Exactly, you know, but I think diversity is just going to have to be a thing. Right now with the Internet culture, they call YouTube Asian Hollywood because 10 years ago Asians weren't in movies or commercials, but I think Hollywood will feel the backlash now if it's not inclusive.

It's definitely becoming a recurring conversation in the entertainment industry. Especially with the Internet's call-out culture.
Exactly. Diversity needs to be reflected in Hollywood because we're a country of immigrants. As radical as the Trump message is in keeping America in a bubble, the other side is becoming just as radical.

Did you ever feel like you missed out on opportunities because of your gender or ethnicity?
I feel like, I guess it's not cool, but I feel like in some auditions they needed the Asian. Which meant I got the part over someone else who wasn't a minority...and that didn't feel good. I want to be hired for being myself. I turned down roles that I felt were making a mockery of the Asian stereotype. I've walked out of auditions that have asked for accents. That I feel is racist.

That's brave man.
It just would've reflected badly on me if I'd actually done the role.

Well you almost cross all of these genres, which means you have something to say.
Yeah, it's cool but it's also yikes. I hate telling people what I do because it's too confusing. I just tell people I work at the Park Slope food co-op because it's just annoying.

Has that ever backfired on you?
Yeah, well I got booked for this show and I don't do stand-up so my show is a rap show. I got onstage and people didn't know I rapped and everybody just got so angry. They demanded stand-up. There was this confusion that was embarrassing for me. That's one thing that backfired, people just didn't know the extent of what I did.

You brought up the concept of a 'following', how have you seen that manifest, seeing people get hired or cast as a result of their followers? Is that frustrating?
Yeah, but I mean for me I'm sure that it stems from a place of jealousy. If you're a comedian with 15,000 followers and then you see some kid from Idaho who Vines and has 13 million followers, it feels unfair. I don't think people should be measured on their following basis but unfortunately it's a necessary evil. It's a 'how do I know who you are if you don't have millions of followers?'–kind of deal.

There's a lot of yourself you have to give, though, when you get to that kind of level.
Yeah, I mean my boyfriend gets angry when I Snapchat or Instagram story things, he doesn't like it. He wants the moment. I understand but what I don't think he understands is that's my job. I have to be visible.

No! You open them?
I open them. I don't respond, but opening them is response enough. It's just an erect penis with the tag Welcome to Hawaii. It gets weird.

I found Kevin Jonas' Snapchat once and just used to snap him my friends and I constantly like "Love you Kev!"
See if I got that, I would really like it. I like when they're like "Hey Awkwafina" and talking to you. I don't like it when they're snapping their vegan mac 'n' cheese. People need to stop with it.

Is it the same via Instagram DM?
Ok so I just found the other box that isn't your friends, that's like the world. It was just all "hahaha" which is nice because my friend are all salty and don't tell me I'm funny. It was just the tear emojis, people are much cooler on Instagram because it's more of a Linkedin deal, it's not as anonymous.

What would you need to receive from a fan, or what opportunity would you get offered, which would make you think 'I've cracked it, I'm here to stay'? Have you already felt that?
A cool thing about me is that I'm a pessimist so even if I get handed something great I always think it's going to end terribly. So I don't think I'll ever break it. I don't even know if I break it, I'll be aware that I broke it. I think what's more important than money and fame is longevity. You can be a 'Cash me outside' and everyone knows you, but the quicker it comes in the quicker it goes out. It's the tortoise and the hare, if you take the tortoise route you won't necessarily be a Kardashian, but you'll always meet the coolest people.

I mean, would you want to be a Kardashian?
No, money and fame has never been it for me. Once I saw how the industry goes and how it's so hype-based, especially the music industry and even more so the rap industry. It's so subjective, you have rappers that come in then go out, it's old news. Some people drop a video and on the first day they get a million views, it took me two years.

Is that discouraging?
I feel like that's better, you can't shoot for the money. It will go as quickly as it comes. It's better not to come in with a viral hit, is never meme'd out, doesn't make a million dollars overnight. That's longevity. Longevity means the ability to get any role at any time in my life, that's the dream.