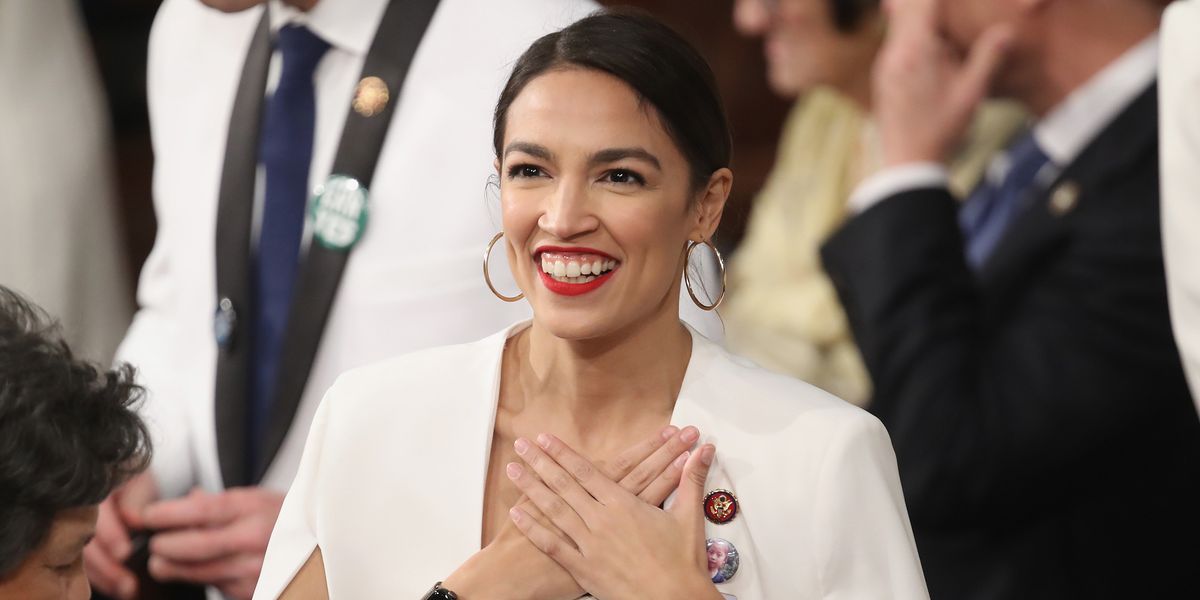 In addition to being an excellent dancer, it's a well-established fact that Alexandria Ocasio-Cortez is also a big drag stan. So it shouldn't come as any surprise that the congresswoman herself popped up at a party thrown by queer nightlife icon Susanne Bartsch over the weekend.

Like any New Yorker-in-the-know, Ocasio-Cortez and her boyfriend, Riley Roberts, made a special appearance at Bartsch's weekly Bartschland Follies event — which features a grab-bag of burlesque, circus, and drag acts — at Manhattan's McKittrick Hotel last Friday. And from the looks of it, she had quite the time — posing for photos with Bartsch and drag king Murray Hill, as well as taking a moment to go on-stage with NYC party icon, Joey Arias.

Alexandria O.Cortez and myself at BARTSCHLAND FOLLIES! I was gagging ! She’s Amaxing ! The place went wild ! Chanting her name.!

Speaking to Page Six, Bartsch enthused about the very special appearance by saying, "What we do is underground, so it was cool to see that she has her finger on the pulse." Not only that, but Hill also told NBC that Ocasio-Cortez's presence at the event "reignited the fire that's burning in all of us."

"She stayed and watched the entire show starring New York's finest misfits, nightlife creatures, rabble-rousers, queer icons," Hill told the publication. "She then got on stage and said, 'Be who you are. You are beautiful. You are accepted'" — which, honestly, sounds amazing.

See a few snaps from the event, below, and try not to get too jealous.

The inspiring and formidable @ocasio2018 attended the @bartschland Follies show @themckittrick last night in NYC. She brought hope to the room and showed us 🇺🇸 future! Her choice words, “Be who you are. You are beautiful. You are accepted.” 🏳️‍🌈 In this pix, I’m saying, “I’m standing next to a future president!” The 2nd pix, I’m thanking her for her work, speaking out, and fighting the good fight. #aoc #4thofjuly #resist #showbiz