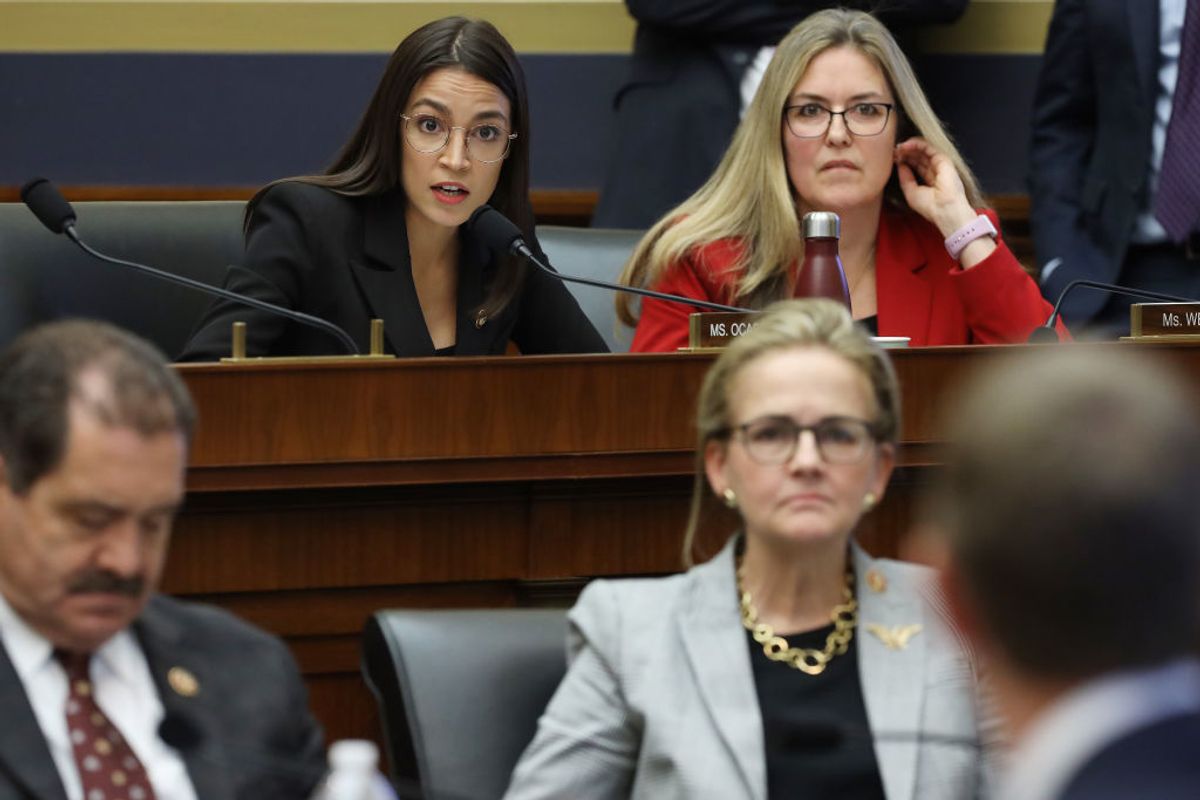 For all of you who were fans of the way queens on Game of Thrones slayed petty, sniveling men coming for their crowns, you'd be delighted to know that firebrand Congresswoman Alexandria Ocasio-Cortez struck again yesterday. As usual, the pointed questions she asked were necessary; what follows is far from mere entertainment.

The unfortunate target of her ire was Mark Zuckerberg, who was called to testify before the House Financial Services Committee yesterday to answer for Facebook's history of profiting from political misinformation.

The veil was first lifted on Facebook's collusion with right-wing political forces in the aftermath of Trump's 2016 presidential election. Following years of rumors and reports that the social media giant, which also owns Instagram and WhatsApp, had been illegally harvesting users' personal data without their consent to influence voters through political advertisements, former Cambridge Analytica employee Christopher Wylie blew the whistle on the whole illicit operation. (Now defunct, Cambridge Analytica was the data-mining company hired by Facebook during the last election to help Trump win.)

But Ocasio-Cortez's live exchange with Zuckerberg revealed that, while he may act as if he does he not know what he's doing, Facebook's role in eroding democracy is perhaps more insidious than we've previously thought.

In one exchange, the Congresswoman tried to decipher just how Facebook goes about vetting and fact-checking political advertisements, which as 2020 grows closer, is something the company should definitely be fine-tuning.

Zuckerberg has a hard time answering direct, yes/no questions. He diverts to identifying political ads that lie as "bad," but can't seem to confirm or deny how intensive Facebook's fact-checking process of ads actually is:

Zuckerberg: Congresswoman, in most cases, in a democracy, I believe people should be able to see for themselves what politicians they may or may not vote for are saying and judge their character for themselves.

Zuckerberg: Congresswoman, it depends on the context that it shows up… organic posts… ads…

As Rolling Stone reports, a recent change in Facebook's policy on misinformation actually makes it easier for lies within political campaign advertisements to go undetected. A recent ad purchased by the Trump campaign — never one to stick to cold, hard facts, to be sure — includes claims about Joe Biden's involvement with Ukraine that were determined untrue by third-party fact-checkers who were approved by Facebook. But given the new policy, the ad was not taken down. Since the policy has been revised, Rolling Stone reports that Trump has already spent $1.6 million in ads on the platform in a week.

.@AOC: Why did you name the Daily Caller as a fact-checker for FB?

Zuckerberg: We don’t appoint the fact-checkers. They go through an independent org with a rigorous standard.

AOC: So you would say white supremacist tied publications meet a rigorous standard for fact-checking? pic.twitter.com/C5Kv1fuGov

A couple weeks ago, 2020 presidential candidate and Massachusetts Senator Elizabeth Warren tested out Facebook's new policy by posting a fake ad she paid for claiming that Zuckerberg and Facebook have endorsed Trump for re-election. Warren wrote on Twitter that the lie was approved and running online quickly, with seemingly no back-end process to determine if what she was posting was true or not.

We intentionally made a Facebook ad with false claims and submitted it to Facebook’s ad platform to see if it’d be… https://t.co/q8pTprJJp9
— Elizabeth Warren (@Elizabeth Warren)1570888897.0

Has Facebook picked sides? Financially speaking, it's worked out in their best interests. With Trump mounting a record-breaking fundraising campaign for 2020 re-election (a combined $125 million in the last three months, according to the New York Times), it is likely he and his cohort will again turn to Facebook to disseminate information. With profit in mind, socially speaking, courting conservatives has worked out in Facebook's interests, too.

As Politico reports, Zuckerberg has been hosting a series of private dinners with key right-wing figures, including Republican Senator Lindsey Graham and Fox News pundit Tucker Carlson, who has said on-air that white people are "not designed to live around immigrants" and once insisted that a tweet calling Trump-appointed Supreme Court Justice Brett Kavanaugh an entitled white man was a form of "white genocide."

Ocasio-Cortez, sharp as ever, brought up Zuckerberg's dinners, asking about what they entailed, and if these might make Facebook seem biased in the upcoming election. Zuckerberg said, "I'm sorry… I don't remember everything that was in the… that was in the question."

Make your own decisions about Facebook from here, but know that change starts within! Personally, I deactivated my account earlier this summer and I haven't looked back.