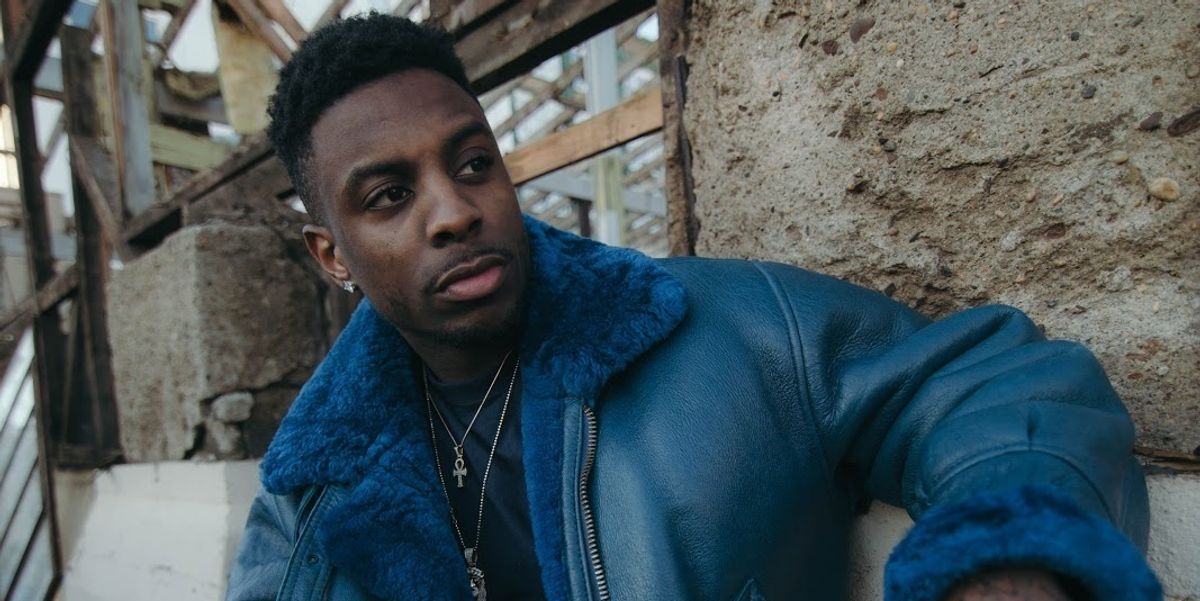 Meet ANoyd, The Artist Who Blames Everything On Jay-Z

ANoyd, born Dashorn Whitehead, has defied the odds of what lyricism sounds like in this generation. The Connecticut-born rapper has fearlessly navigated with cut-throat bars on some of the most notable platforms in hip hop, including multiple appearances on Sway In The Morning with the legendary Sway Calloway, New York's Hot 97 with DJ Enuff, Shade 45 on Sirius XM and more.

What some artists in 2018 claim to be outdated (word-play, metaphors, deliverability) ANoyd finds to be his advantage as a newcomer. I first met ANoyd back in 2013 in a small studio in Connecticut recording with his long-time producing partner RichBreed. ANoyd's flows were marked by high energy and lyrics that would fly past you on the first listen, but made you think damn when you'd finally catch on.

Carrying an unopened Nas: Illmatic vinyl was not just a bar used in his 2016 record, "It's Different Now," but Nasir Jones has sonically been aligned in the fabric of ANoyd's music since the very beginning.

His latest album, Blame It On Jay-Z, was inspired by Jay-Z's 13th studio album 4:44. The culture shift in music and the push for black ownership that Hov discussed on 4:44 tracks like "The Story of O.J." urged ANoyd to release an album from his perspective. The substantial content produced on this record has opened up new territory for him as an artist, and we caught up with ANoyd to learn more about his journey:

When was the moment you fell in love with hip hop, and when did you know it was something you wanted to pursue?

I fell in love with hip hop sophomore year of high school. Started rapping with my day 1's. Gabe, Omar, Jamie and Smash. We had a group called Kamp Kush, man those were the days. No worries, no nothing, we would just work on music all day in my mom's basement 'til we got tired. As time went on, everyone slowly stopped rapping but I kept going with it. I just fell in love with hearing my voice in the speakers. I knew I wanted to make this a career when I first performed at New Britain High Talent Show! I loved the stage so much, it was like a high. A crazy rush through my body. I needed that feeling for the rest of my life. I was sold from there.

Starting working with producer 2wo4our a.k.a. Ty Nitty around that time. We been brothers ever since I could remember. Few years later, met my brother RichBreed and we started working together instantly. Trying to build a sound for Connecticut honestly. First project we did was an EP called ANoyd With Life, and there were so many gems on that project. Then we had the Summer in Sinsinati EP where we had our first single "Liquor Stains." History was made after that.

After watching multiple freestyles, including your most recent 5 Fingers Of Death on Sway in the Morning, your lyricism is unmatched. Every line is a bar. Share what your writing process is like. How do you prepare to deliver such precision and creativity at the same time?

I love to write, I love sitting in my room and thinking of different ways to express myself. I literally have the beat on loud and I just zone out. Don't call me, don't text me, "Mommy, I'ma call you back." It's like I'm lost in another world when I'm putting the pen down. I always have to come prepared because the world is watching. So I have to make sure I come with my best every time. It's no problem though because I love outdoing myself. Every verse is always better than the last with me. I don't try to be better than anyone else. My only competition is ANoyd.

This freestyle was recognized by The Roots legend Black Thought and other music industry vets. How does it feel to be received in such a powerful way during this era of what's considered "mumble rap?"

Love Black Thought man, such a legend. Amazing lyricist, and lyricists love getting acknowledged by other legendary lyricists. Seeing how much time I put into coming with my A+ game, it's always great to get love from it. There's so many people in the world that love substance, that love lyricism. What I come to the table with will be received one way or the other. But honestly seeing the slow process of success to me is way better than getting famous over night.

Explain the meaning behind the title of your album, Blame It On Jay-Z. Is this something you knew you wanted to create early on in your career or was it influenced mostly by 4:44?

Blame It On Jay-Z was inspired by 4:44. I loved the project so much it made me put out a lot of my truths and put my opinion on where we are as a culture musically. Probably one of my most honest contributions, musically. I like to call it my version of 4:44 for my generation, being that there were a lot of the younger listeners who, allegedly, didn't connect with the project. Maybe the generation gap, who knows. But that's why I gave my take on it for music lovers in my age group.

Who are your top 5 and where do you see yourself eventually fitting on the totem pole?

Awww man, I hate this question so much cause it changes every day! Right now, my top 5 would be Jay, Nas, Pac, Andre 3000, and Mobb Deep. I definitely see myself in everyone's top 10 as far lyricism, storytelling and creativity in the future. I'm already on a few lists according to people on Twitter which is so amazing to me. It's so early in my career and I haven't reached my full potential yet. Being on Top 5's is always the main goal for me. Having people argue in barbershops, school tables, at work about why ANoyd is top 5 is something you can't pay for. That's genuine love.

Aside from music, are there any other projects or collaborations you are working on?

Absolutely! Hopefully working with Fila in the future, Coach also. I want to work in film so badly. Aiming to be a actor after I'm done rapping, so I'm planting a few flowers in my music videos to show that I'm capable. Black Panther 2 maybe? Ryan Coogler, holla at me! [laughs] Lots of other dope things in the works as well. Don't want to spill it all cause somethings aren't set in stone, but just be ready to see other sides of ANoyd outside of music.

As a new artist it's difficult to imagine a legacy for career when you're just starting out, but purpose is super important. What do you want listeners and fans to always remember about ANoyd?

I want them to remember ANoyd as a unique, heartfelt, original role model, hero, and inspiration. ANoyd always put his heart into everything he's done 100%! Every verse, every song, every word. When they're listening to my music, watching my videos, my interviews, movies I directed or wrote, roles I played in films, remember that I gave it my all. I want to show that I'm human, I'm flawed, imperfect and I feel like that sticks with the people more. I saved a lot of lives and motivated a lot of people just by telling my life! So the world will not only remember me as ANoyd, but also as Dashorn Andrew Whitehead.