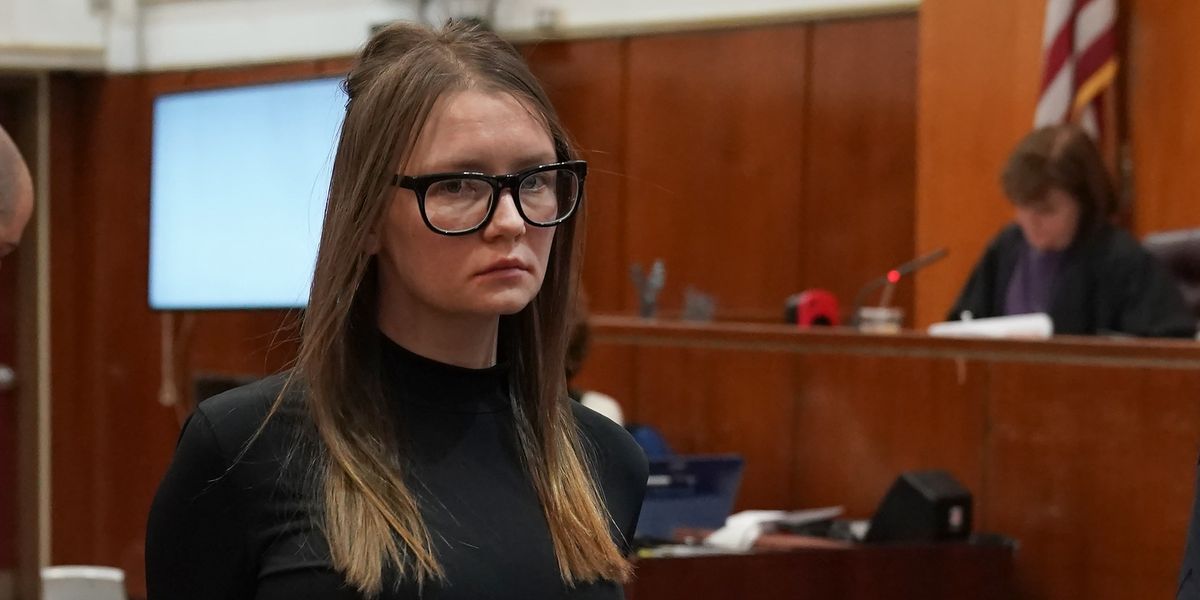 This Anna Delvey-Inspired Art Installation Has Us Spiraling

Scammer queen Anna Delvey, aka Anna Sorokin's combination of delusion and chutzpah, which allowed her to grift "New York's Party People," is a personal inspiration to many of us. Now, her story — or rather, the cultural fixation with her story — has become the inspiration for a conceptual art piece, according to Artnet.

Talmadge, a painter and sculptor, created a five-paneled dressing screen. Each panel is decorated with a kind of a still life scene full of symbols, each telling a chapter of Sorokin's story, from her arrival in America to her trial, which ended in a 12-year prison sentence (that Sorokin's currently serving on Rikers Island). You'll see a Bendel shopping bag, a matchbook from the resort of the famed Morocco trip, the scales of justice, and the New York City Criminal Courthouse.

Where it gets existential is, behind the screen, an unseen mechanical device throws pieces of clothes above the top of the screen, as if Sorokin were back there rummaging through her wardrobe to find the outfit we'll ultimately obsess over and write think pieces about.

According to Artnet, Talmadge sees her creation as a "a kind of portrait." She explains, "These courtroom outfits, presented in an infinite loop of 'hysterical' indecision, represent the closest we can get to her inner reality."

Well. "Infinite loop of 'hysterical' indecision" is a provocative image, but definitely a huge damn mood. The piece also subtly indicts the voyeurism of the Anna Sorokin debacle — as we find herself "watching her" get dressed.

Talmadge says there's another side to it as well, that has to do with the scrutiny all women face."People are obsessed with the case because it hits so close to home," Talmadge told the Art Newspaper. "As young women we constantly battle with feelings of fraudulence. Anyone who is hustling in the creative industries can relate to her."

The piece pushes forward trains of Talmadge's work, which often plays with kitsch and irony. If you enjoy "Four Courtroom Outfits of Anna Delvey," check out more work by her here.