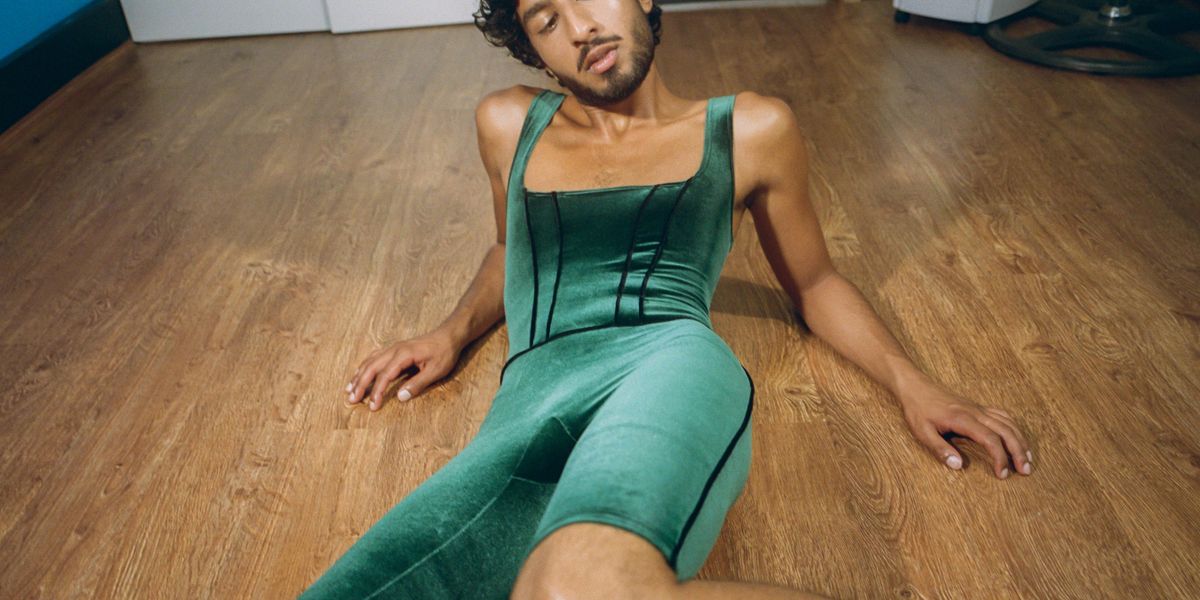 Designers often look to past decades and time periods for inspiration, but for Isabelle Hellyer, the possibilities are endless when it comes to incorporating historical silhouettes in her designs. Her Australian-based label all is a gentle spring (stylized: lowercase) has been around since 2018, experimenting with found fabrics to create collections for anyone no matter how they identify.

That mantra is especially evident in this exclusive editorial shot in Sydney by Ellen Virgona, where subjects of all genders and identities model the brand's body-hugging onesies, biker shorts, crop tops and lace tights. (Celebs like Halsey, Charli XCX and Caroline Polachek have all sported the brand as well.) The new collection, titled Wishing Well, takes the historical references even further.

From the '80s heyday of aerobic workout tapes to the Winter Palace of Catherinian Russia, the inspirations this season are bountiful and an assembly of contrasting eras. PAPER caught up with Hellyer to discuss her latest collection, the resonance of historical silhouettes, the role costume plays in her brand and the importance of community.

I don't think of aerobic outfits when I think of Catherinian Russia. What's the connection there?

I'd say it's tenuous, they're really just two eras I'm drawn to. 18th century court dress required a lot of fabric, and '80s aerobic outfits hardly cover you up at all. But they're both very flattering, erotic looks, and that's what I'm interested in: whether it's the cup-runneth-over cleavage of a court dress, or a high-cut Jane Fonda thong leotard. I wanted to find a way to mash those elements together. I think that collaging worked best in a style called the Corset Illusion Unitard. It's cut from four-way stretch velvet and from the waist down it's basically a pattern for something you'd wear to pilates. From the waist up, I used the same sort of panelling as in our corsets—minus the boning. It's this flexible, modern take on my favorite elements of each era.

What was the inspiration behind this new collection and how did you bring it to life?

I was into Los Angeles Storybook architecture, particularly an art director called Harry Oliver who beat Walt Disney to the whole real-world fairytale thing by a couple decades. He designed some of the city's most famous Storybook buildings: the Witch's House in Beverly Hills, the Tam O'Shanter in Glendale. The Tam O'Shanter was LA's first themed restaurant. I'm really interested in bringing fantasy into everyday life in a way that's functional, and Harry Oliver provides a good blueprint. As you mentioned, Catherinian Russia was an influence. I look at the dress of European Courts through the 1700s for all the collections, and I was watching digitized home workout tapes from the '80s and '90s too, which influenced a lot of the leotards this season. My favorite instructor is Tamilee Webb, and her fits in Abs and Buns of Steel. I think that historical hodge-podge comes through in the campaign styling too. We never styled the corsets in a way that was true to history. We would do them Buns of Steel style; with high-cut thongs layered over cycling shorts. Kinda funny.

What was it like working with your team on this campaign?

I always said I wanted the Wishing Well campaign to be a historical fever dream, and everyone understood what I meant by that. Kurt [Johnson] had lots of ideas that really enhanced the looks: he commissioned custom Underground Sundae jibbitz for our Crocs, which were brilliant, and he got Mana [Mackay], who I'd always wanted to shoot, on board. Daphne [Nguyen] made everything look expensive. She knows her photography gear, and is just a really cool person. The main reference I gave Kyye [Reed] for the hair was a paragraph of text about one of Louis the XIV's mistresses, Mademoiselle de Fontanges, plus some pictures of Pamela Anderson's up-dos falling down. He got it exactly right. You don't need to give Colette [Miller] a reference. A few gestures will do, she always knows what to paint on.

What role does history play in not only the essence, but evolution of all is a gentle spring?

They do things to the body that modern clothes don't. We're more shameless than ever, so clothes that push and prod us in flattering ways are really appealing. I think historical clothing is interesting, but that doesn't always mean it's important. It's definitely the first place I look for ideas. There are so many people, buildings, and events that could inspire entire collections. I can't see myself running out of inspiration. I think I'll run out of energy and money far sooner than ideas.

Why do you feel this homage to history and its silhouettes are important and work so well today?

Here's a good example of a perfect historical jumping-off point, taken from a favorite reference book that's here with me. The emperor Nero—crazy, the one with the violin—built a palace called the Domus Aurea, or golden house in Rome in the 1st century AD. It was built to entertain, with gold, ivory and silk all over, with kinda mind-boggling mechanical aspects: one room had a revolving ceiling painted to emulate the planets spinning, and pipes running through the walls to sprinkle rooms with perfume, and ceilings that could open up to scatter flowers onto the floor below. The decorator was called Fabullus! It's like, history is better than fiction here. You do a whole collection based on that palace, easily. Anyway, I just find history to be the best resource. But it's a purely aesthetic interest. I'm not nostalgic for these eras more broadly. I don't want mice in my scullery.

The collection is titled "Wishing Well." Why?

It's a bit of a double entendre. Like I mentioned earlier, I was really inspired by Storybook architecture, which is all about fairytales. A wishing well is the perfect set piece to encapsulate all that, and we had one built for the campaign. It's in the background of almost every shot, and became the collection namesake pretty intuitively. But Wishing Well also describes how I'm feeling: I'm wishing you well. It's a way of saying my heart goes out to y'all. The name of the label is similar, it's something a friend's Mom once wrote in a comment on Facebook: "I hope all's a gentle spring with you." So the name of the label and the name of this collection are both nice ways to say, hope all's well.

What do you think is the most important thing the world should know about the brand?

People knowing the brand is enough for me. There's so much noise today, and fashion is crowded. Just for people to find gentle spring and take the time to appreciate the story is a success. I want people to enjoy it whether that's wearing it, or coming back to the images. I definitely hope people wear the clothes out in the world. I want the clothes to take on a life of their own. They're dress ups after all! This is a costume box for anyone to play with.