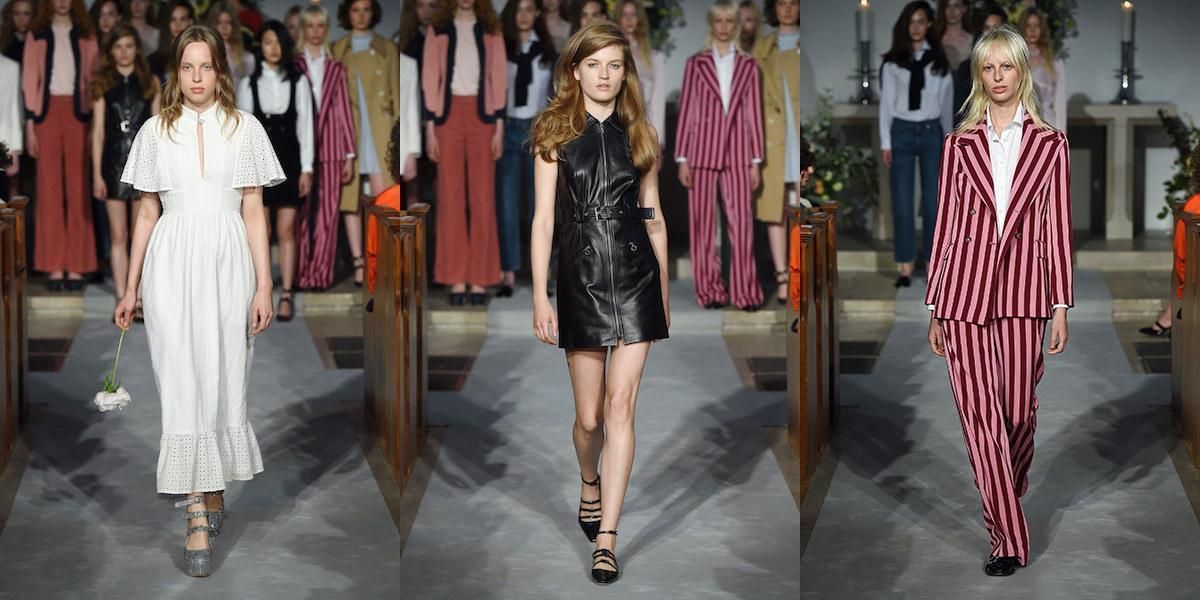 By Tom Prior
Paper Magazine

After a string of collaborations with other brands and whole lot of anticipation, Alexa Chung has finally unveiled the first collection from her newly formed eponymous brand.

Last night an hour or so before sunset, a Danish church nestled neatly in leafy North London showcased the Pre-Fall '18 ALEXACHUNG show. Familiar faces such as Henry Holland, Daisy Lowe and Natasha Lyonne were out in full force to celebrate her work. A reception held in the surrounding garden offered up endless prosecco, vodka lychee cocktails and slabs upon slabs of pizza (a highlight at any fashion party) to ease everyone into the mood. The setting felt somewhere between an English countryside fair and a Woodstock backstage area. Dreamy.

And in many ways this moment was dreamlike for Alexa. "I just really like making clothes and dreaming up new outfits" she says, "although it's a risk (to start a brand) I was too curious not to try to do this – to make my dream a reality."

Finally, a bell rang out to signal people to enter the church hall. Business of Fashion's Imran Amed and Dame Natalie Massenet of Net-A-Porter filed swiftly in, as a young girl stood at the pulpit gazing onto the audience in anticipation. When she began to sing, a children's choir of at least 20 joined in to belt out "Good Vibrations" by the Beach Boys as the show started.

The opening look was that of a socially conscious freshman with a cause -- over a boldly popped collar her sweater read 'Screw You' in a font inspired by shirts from friend Tennessee Thomas' Deep End Club, an activist community and platform in New York. Effortless tailoring took firm shape in a suit donned by the ever incredible model Lili Sumner – thick pink and burgundy stripes, of course – reminiscent of suits Rolling Stones founding member Brian Jones would ramble around London town in. "Music has had a huge influence on my work … I don't think I'll ever stop finding musical magicians compelling," Chung says.

Add to the mix some ethereally soft Pre-Raphaelite gowns gliding through and a bolder statement in the form of a floral hooded number. A key piece is a black buckled mini dress, which can only be appropriately described as the love child of that iconic Marianne Faithful motorcycle look and Jane Fonda as Barbarella. As a whole, the looks were wonderfully balanced and accessible, yet it had a solid and directional touch of the ALEXACHUNG aesthetic throughout.

After the finale, which saw the space blasted with pink petal confetti, Chung ran down the aisle to assemble her troop outside the church and in front of a vintage convertible complete with white wedding ribbon.

In a way, this was a marriage, a union of some kind. A marrying of Alexa Chung the human to ALEXACHUNG the brand. And if this first collection is anything to go by, this union is set to be less Britney's 55-hour Vegas annulment and much more an everlasting Goldie & Kurt marriage.

All images courtesy of ALEXACHUNG.