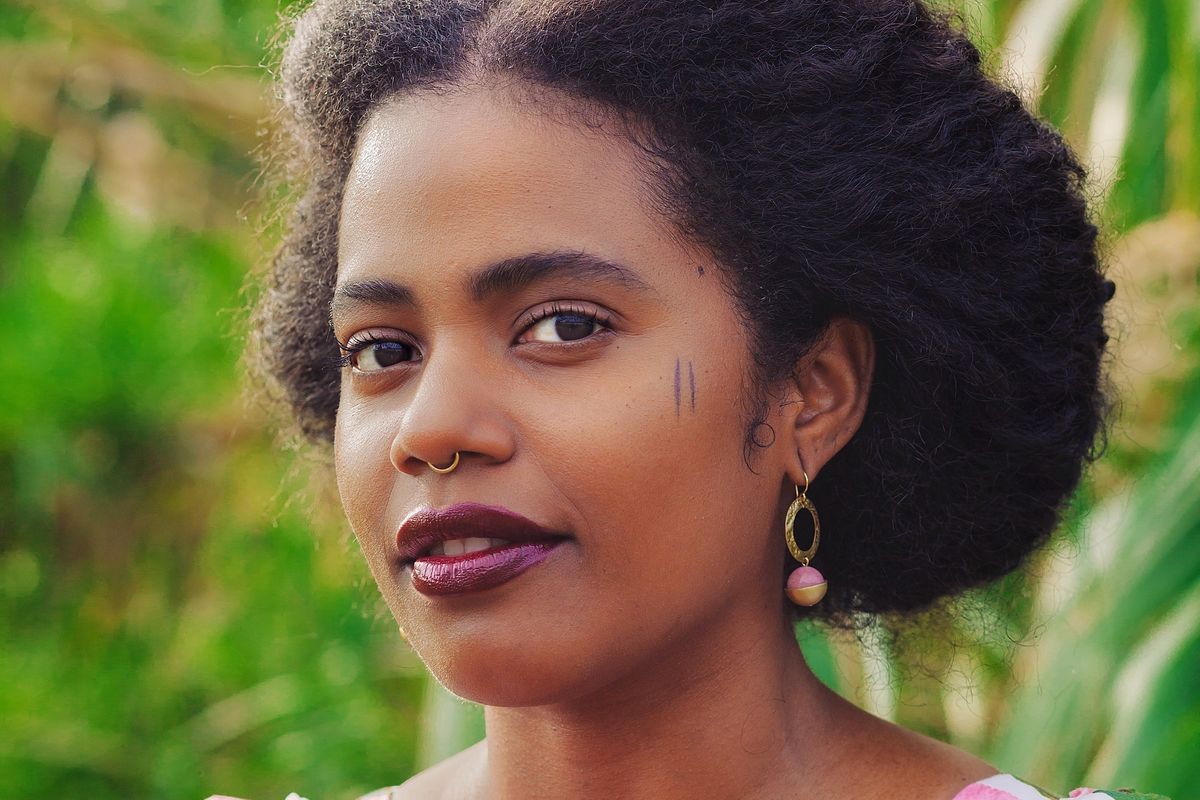 Akwaeke Emezi Wants Us to Build Communities for Ourselves

While there are many books that stay with us long after we put them down, Nigerian-born writer and video artist Akwaeke Emezi's The Death of Vivek Oji, out now from Riverhead, is as permanent as a tattoo. It is a testament to the security of chosen family, the multifariousness of identity and the power of queer love. Rooted in the center, however, is the exploration of what happens when a family loses a child they never really knew.

While the book leads with his death, Vivek Oji remains very much alive. Told in perspective-shifting narration, The Death of Vivek Oji begins with a mother finding her dead child on her front door, swaddled in colorful fabric. Hell-bent on receiving answers surrounding her son's death, his mother, Kavita, discovers the solace Vivek found in his friendships with the daughters of the Nigerwives, foreign-born women married to Nigerian men.

But at the heart of it all is Vivek's deepening relationship with his cousin Osita, a bond that continues to live even after death. It is as much a mystery as it is a family drama as much as it is coming-of-age, ultimately serving as a reminder that the parts we present in both private and public are just as valid on their own as they are in totality.

PAPER caught up with Emezi in the midst of their highly anticipated sophomore novel to talk about identity, queerness, and the intersection of both when trying to forge relationships with family, both blood and chosen.

Vivek is so multilayered, in the most beautiful way possible. How did he initially come to you?

Really, his death came to me first, and then he spun out from that. I think that influenced who he is as a character because I was working backwards from the peace of his dead self and unfolding time to discover who he was while he lived.

It's obviously not a spoiler that Vivek dies, but his absence is still very much a presence, especially when he gets to share his story on the page. Why was it important to have him deceased from the get-go?

I partially structured The Death Of Vivek Oji after Gabriel García Márquez's Chronicle Of A Death Foretold because I wanted to challenge myself by using García Márquez's strategy of killing off the protagonist immediately, while still telling a story that a reader would remain invested in. There's an idea that knowing what happens can spoil a story, but I think a good story can also be one that makes you care about the characters even if you know what's going to happen to them.

I remember we talked about alter egos at a virtual cocktail hour hosted by your publisher a few months ago. In a way, Vivek embodies someone else when he's not with his parents. Is there power to find in an alter ego? If so, how?

I tend to think of it as a reflection of the spaces we occupy. What parts of ourselves are safe there, and what parts must be suppressed in order to avoid violence? With Vivek, he is able to have different spaces in which he can be various versions of himself, but I think it's important to note that all these versions are real. It's a gift to be able to carve spaces where we can be as much of ourselves as we like, without fear of repercussion.

"It's a gift to be able to carve spaces where we can be as much of ourselves as we like, without fear of repercussion."

Even though Vivek and his grandmother have never met, they are connected. Tell me more about the significance of this connection.

With this book, I wanted to explore reincarnation in Igbo culture, and what it would look like if a child wasn't recognized as a reincarnation due to the gender assigned by the parents. So in this case, Vivek is the reincarnation of his grandmother. She dies on the day of his birth and he's born with the same scar on his foot that she had, but he isn't given an appropriate reincarnation name because gender is at play, and that leads to a lot of spiritual trouble for him down the line.

I think this book is an important reminder for the global LGBTQ+ community. I feel like sometimes we think our community is so insular — but that's just not reality. What do you want your readers to take away in that regard?

Well, my readers are queer Nigerians and I want us to take away that we can build communities for ourselves, where we are seen and valid and loved. The fact that we are legible to each other is so important, even when other people refuse to see us and try to crush us into something else.

Vivek's friends, the children of the Nigerwives, play a specific role. Was this a nod to the universality of chosen family?

I love chosen family! They have saved my life more time than I can count, and I very much wanted Vivek to have that in his friends. It's possible to spend much of your life trying to get people to accept you just because they're family, but it can be harmful to keep throwing yourself against the gaze of someone who can't or won't see you. Chosen family allows you to go where you are seen and loved, to make that your center and be safe there.

"My readers are queer Nigerians and I want us to take away that we can build communities for ourselves, where we are seen and valid and loved."

Speaking of insularity, grief has a similar effect. When we grieve, it feels like the world has stopped all around us — but it just keeps going. Is it possible to find respite in the fact that everything keeps moving, even when we stop?

I don't know. There is certainly a terrible inevitability to the way the world churns on. In The Death of Vivek Oji, we see his mother Kavita suffer because she has to watch everyone else keep living with their alive children while her world has been shattered into a halt. Eventually, the world drags us along with it, whether we like it or not, whether we are grieving or not.

Vivek is closest with his cousin, Osita. Their love goes beyond the familial bond, which swells and crescendos in the most beautiful, yet heartbreaking way. Why was it important for you to make this relationship — this love — the beating heart of the book?

I like love, especially queer love. Vivek and Osita have known each other their whole lives, they've seen each other even when the other person might not particularly have wanted to be seen, and there's a lot of intimacy in that, in being that close to the ragged parts of someone else. They hold each other's secrets, they fight, they find each other over and over again. It's queer, it's a bit taboo, but there is beauty there that they both deserve and that I wanted to share with readers.

What is one good thing about releasing a book during a particularly tumultuous moment in history?

Knowing that since the world won't stop, then my work won't either, because the people who need this book still need it at this moment, perhaps even more so than before.

The Death of Vivek Oji is available for purchase here.