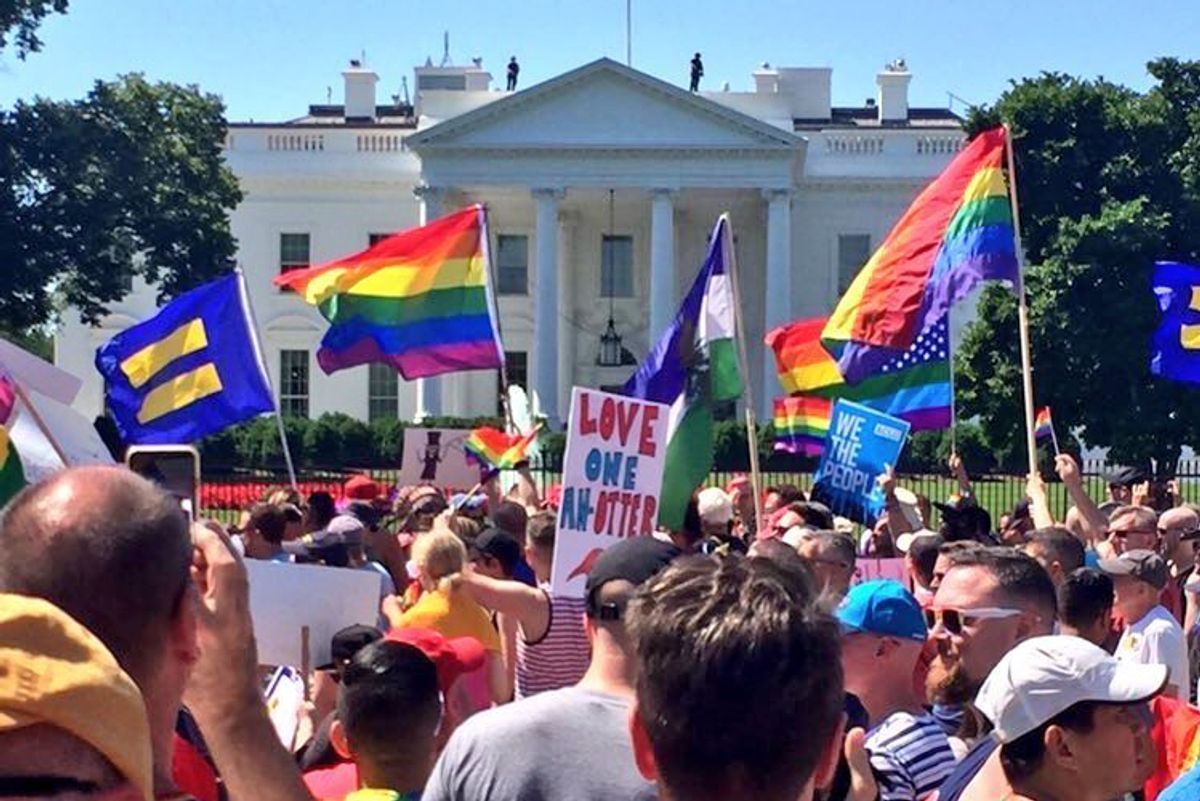 The Equality March in D.C. Was an Invigorating Display of Resistance and Solidarity

And we have the (Polaroid) pictures to prove it.

Yesterday, on the final day of D.C. Pride weekend, there was a special spotlight placed on the Equality March for Pride and Unity. As our nation's capital, D.C. was the "official" location for the march, but there were a number of widely recognized (and widely attended) offshoots that happened in other cities around the country, like Los Angeles, CA, which was also celebrating its own Pride weekend in the historically gay neighborhood of West Hollywood. Overall, the march was a grand success—especially considering the ways in which it took a departure from the usual Pride festivities.

Known as a celebratory time for the vibrant queer culture that has gradually been finding its rightful space in the mainstream, Pride usually focuses on fun: parades with decadent floats, drag queens in their most gaudy looks, and glitter. Lots and lots of glitter.

But with an election of one of the most visibly regressive presidents in history and a tragedy that still has a large majority of the queer community reeling with PTSD in the form of Pulse—which devastated our country exactly a year ago today—there was a call for something much more purposeful. Though there were more "standard" elements of Pride concurrently happening mere feet away—and though the blazing 93-degree sun would be a turnoff to anyone—the march drew attendees with attitudes that were markedly more determined.

As attendees marched down Pennsylvania Avenue, everyone stopped in front of the White House. Under Barack Obama, such a stop would have been a cause for cheers. But with its current occupant, Donald Trump, the stop was an opportunity to let out some long-festering steam. A callout of "Shame, shame, shame!" resonated throughout the crowd for a span of at least 20 minutes, and people carrying signs that were cut to resemble makeshift pitchforks paced up and down the White House gates as if picketing the president. Groups of friends took turns taking pictures of each other standing in front of the well-guarded residence, and most people opted for poses that prominently featured their middle finger.

The mood at the other Pride events was significantly brighter. But even with the clear differences between the Equality March and everything else Pride-related, some elements were noticeably similar. There was still a palpable feeling of queer assertion, and the sentiment that this community would not back down in the face of adversity was prominently shared in both respects. And after the march had concluded, many participants headed over to one of the many other events happening in the city; some chose to temporarily escape the sun and relax in the shade while others headed towards the parties to dance to DJs playing a mix of pop music and reggaeton. Later in the evening, a coterie of popular stars took the stage to perform, including a headlining performance by Miley Cyrus and a drag show courtesy of this season's Drag Race finalists Shea Coulee and Sasha Velour.

Naturally, as was the case with February's Women's March, the most Instagrammable part of yesterday's march were the multitude of clever signs. Personally, I was most impressed by one man's sign that featured a very familiar black and gold logo: On it was the text "Mike Pence blocked me on Grindr."

This one takes the cake though. @Grindr pic.twitter.com/avI0JMrKcu
— Michael. (@yosoymichael) June 11, 2017