A city boy in mid-December Las Vegas sticks out like a sore thumb. The Strip, which normally might be lined with tourists or club-goers, becomes a sea of Stetsons and denim for nearly two weeks as cowboys and rodeo fans alike flood the city for the Wrangler National Finals Rodeo. Western wear and Yeehaw culture trump any flashy neon sign, bringing rugged flare to the shiny casino backdrop. Those living in and around the area are familiar with the phenomenon, as I often heard it referred to simply as "the rodeo" by Vegas residents throughout my trip. But to a New Yorker, it's a sight to be seen.

Upon arrival, it was evident that black Uniqlo dress pants were not going to cut it if I wanted to fully immerse myself. To blend in, it was going to take some Wrangler on my booty and a collared shirt at the very least. Everyone was fitted out in denim, leather, and hides, even if they weren't prepping to ride a bucking bronco over the weekend. 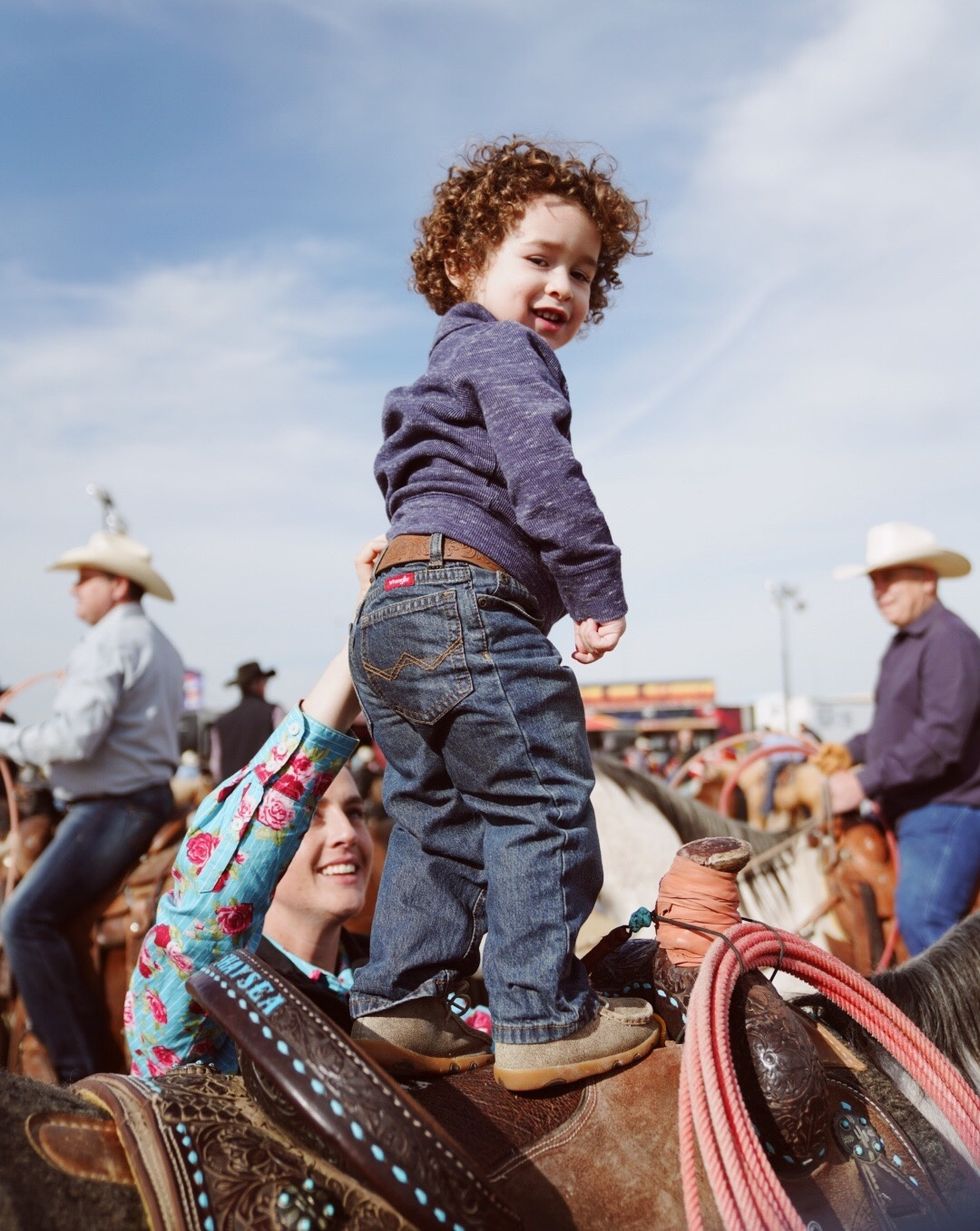 The WNFR is much more all-encompassing than just the aesthetics of the main spectacle held at the University of Las Vegas Thomas & Mack Center, though — it's transformative in that it affects more than just spectators and sport. Culturally speaking, its relevant outside of the main event in the form of pageantry, a massive convention, nightlife, and tertiary sporting events, like the Bullfighters Only. Besides any one pair of jeans or wide-brimmed hat, the WNFR quite literally infects the Vegas way of life in the best way possible.

Take the Miss Rodeo America pageant, for example. Held at the Tropicana hotel, the event is taken just as seriously by contestants and attendees as riders and fans take the actual rodeo. Contestants in the pageant compete in areas of "appearance, horsemanship, and personality" — certainly not the usual pageant queen lineup, but surely appropriate for the crowd inhabiting Vegas during the WNFR.

Pageant organizers had the event running like a rodeo, too, taking an arena-like theatrical approach to its production inside the Tropicana's main ballroom. Strict guidelines were to be followed by press and attendees alike, ensuring that the show ran as smoothly as possible and that the girls were prepared for their biggest moments on stage, of which there were many. From choreographed runway walks in custom fashions to the previous year's Miss Rodeo America, Taylor McNair, entering on a real horse, things were structured down to the second. 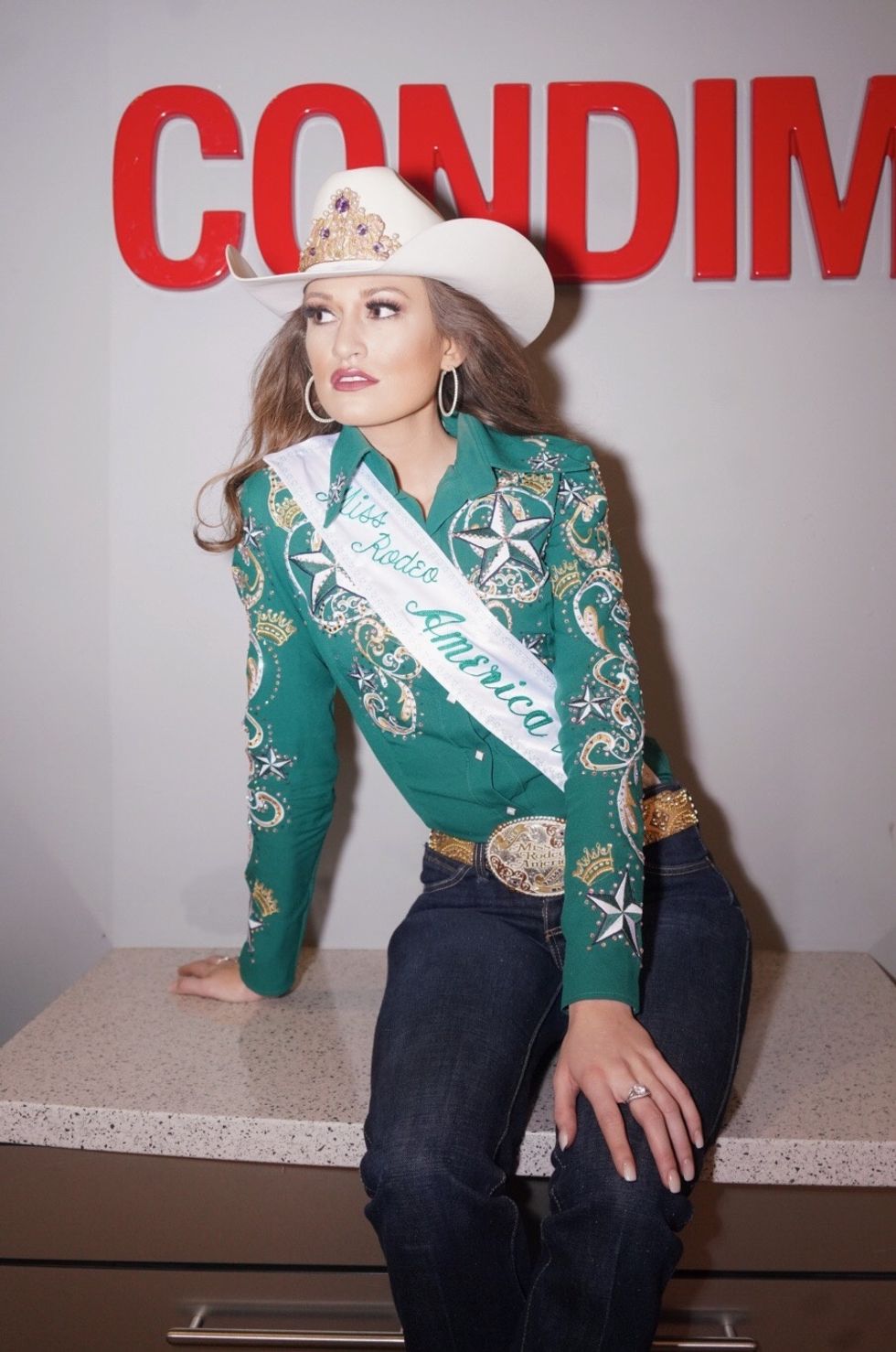 Standing strong against the preconceived notion that rodeo culture is stuck in the past: the liberal use of Lil Nas X's "Old Town Road" throughout the opening sequence of the pageant. It set an unexpected tone for the rest of my experience at the WNFR, one that positioned western culture and its customs as less rigid and more open to change and interpretation. Online, the hit song, which set countless records when it topped the Billboard Hot 100 in 2019, has come to represent a move towards inclusion and representation in both rap and country music alike. In such a surreal and immersive dive into country western culture IRL, I was pleasantly surprised to see that the sentiment still reigned true. In a room of true cowboys and ranchers, it was a small-but-telling signal that country western culture and its aesthetics are becoming shared experiences rather than remaining universal truths.

Getting this fuller picture of the WNFR as a uniquely Vegas thrill was key to understanding the ultimate event that would take place at the conclusion of the first weekend, which included the more formal events like bull-riding, steer wrestling, and racing. The Cowboy Christmas expo, like the pageant, was just as worthwhile. Held at the sprawling Las Vegas Convention Center, the expo was row after row of a seemingly endless cowboy market, complete with not just clothing and accessories, but homemade foods and farm supplies. Exhibitors sold conventional cowboy gear, sure, but it was here that it became even more clear that "authenticity" could co-exist with a variety of other cultures and interests. 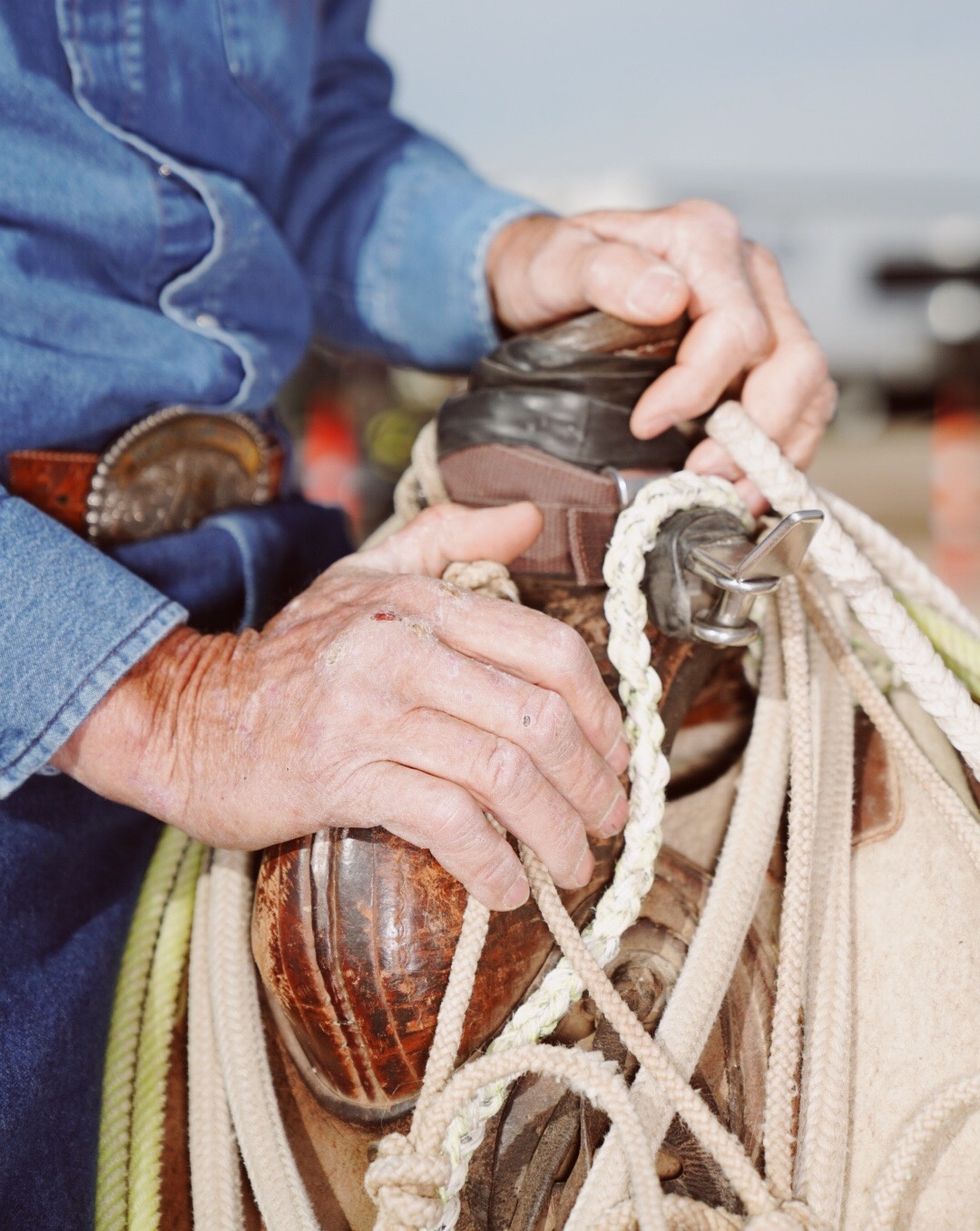 It wasn't unusual to see a stall selling kitschy crafts that might come across as parodic if you hadn't been exposed to the unbridled sense of humor that sits at the core of rodeo culture; empty beer bottles were furnished onto night-lights and wooden signs were burned with sometimes-clever, sometimes-crude sayings. More progressively, the cowboy style — which happens to be very fixed in tradition — was even somewhat up for interpretation at the Wrangler booth.

"The 13MWZ is the original jean of Wrangler, and it originally stood for 'men's with zipper.' Everything else was a button fly at the time, this jean was the first jean to come out with a zipper," sales representative Dylan Faulkner explained to me at their booth. The history and verbiage used to describe the unchanged 1947 pant is what anchors the brand in its heritage, beyond the fact that nearly every rider in the rodeo is outfitted in head-to-toe Wrangler. "It's a variation of boot-cut, in a more modern term, which is going to fit a bit more modern like, but the cowboy cut has been the term for a straight-leg jean that can fit over a boot."

It might seem, then, that an article of clothing so steeped in tradition is at odds with the new notion that the culture is becoming more fluid, but even Wrangler denim was up for grabs. A laser-engraving station near the back of the convention center allowed visitors to the expo to have their newly-purchased pants and jackets burned with any number of designs and patterns. 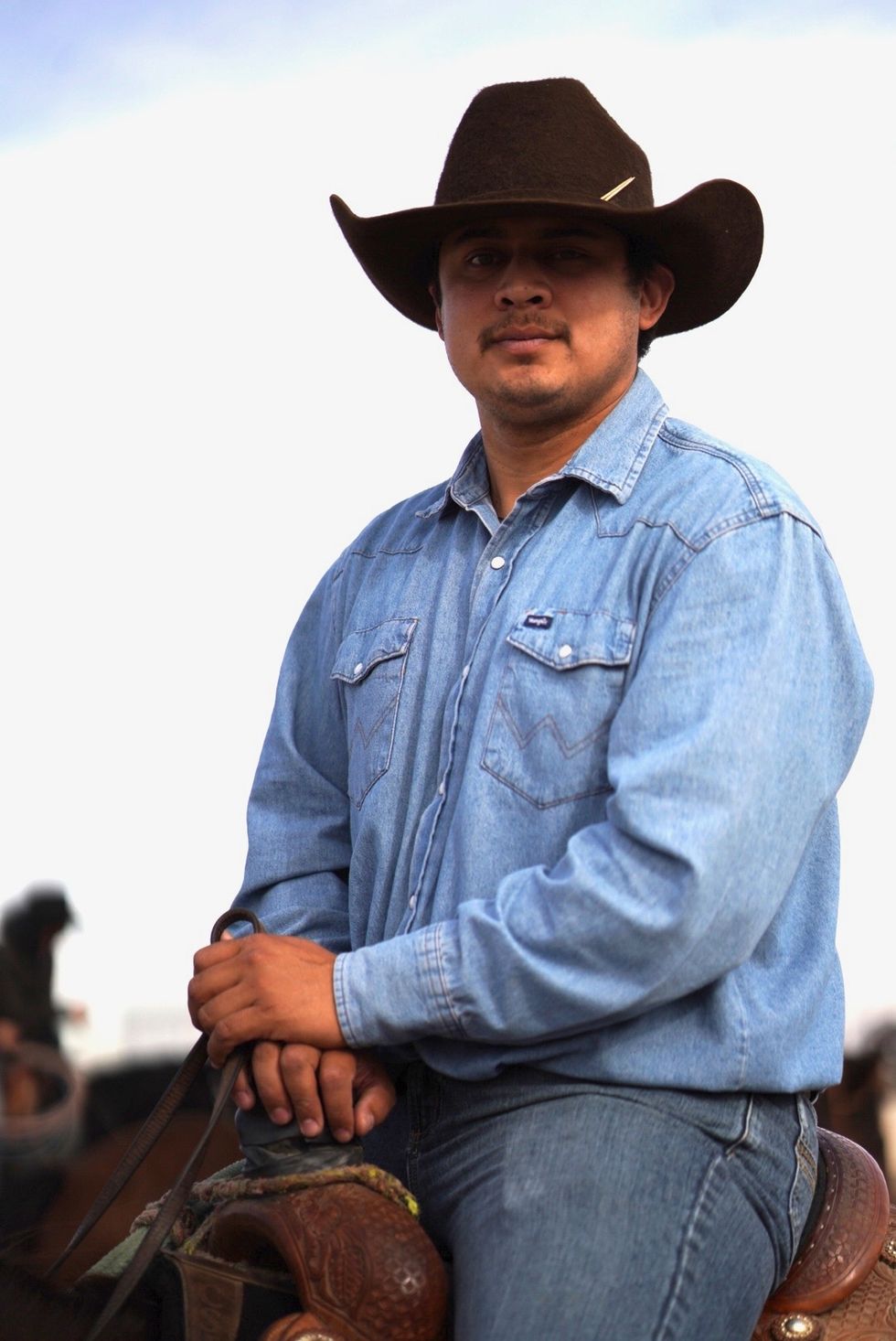 At the main rodeo, it wasn't uncommon to see older cowboys correcting their Stetson brims or fixing their collars, but there was something about the spectacle that made peace with tradition and allowed for widespread enjoyment. Even for those attending a rodeo for the first time, and who might find events like steer wrestling a bit more jarring than expected, it was all about the fun of the sport. Riders were cheered on furiously to beat times as their horses rounded barrels, and bucking bull scores were the object of mass tension. In a way, the WNFR crowd was no different than one you might find at any other arena sports game; the crowd had the fervor of a pack of hockey fanatics and the easygoing drinking culture of baseball.

Perhaps the aesthetics and legends of the cowboy are what build up the culture to some intimidating and intangible from afar. From old western films to modern media, cowboys get the visual shaft in terms of complexity; a hat and square jaw signal roughness, rather than the actual hard work and determination behind the professions and sports within the culture. And while authenticity might be at the core of the looks, dressing for the part comes with a level of autonomy beyond cut and color. In the case of the Wrangler National Finals Rodeo, coming with an open mind is better for proving your authenticity as a cowboy than any article of clothing you can buy at the expo.