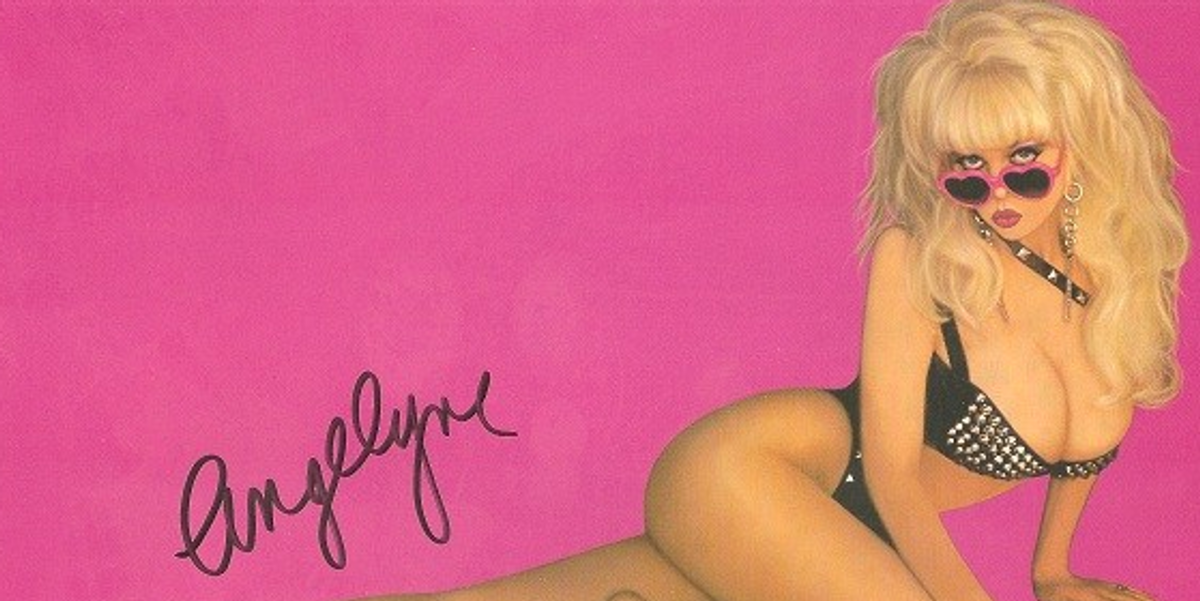 Artist/visionary Andy Warhol was so right when he decreed that in the future, everyone would be famous for 15 minutes -- though, as the years went by, kitschy, disposable stars started to last longer, maybe even a half hour. Today's reality stars might only be truly famous until the next season's cast comes along, but they always seem to keep their notoriety going via perfume launches, public appearances, and gossip headlines that make them more than just a footnote from the pop cultural past.

The 1980s were a prime period for glittery icons of the moment, from Angelyne, a surgerized blonde who plastered herself on L.A. billboards, to John Sex, a Vegas lounge singer parodist with a unicorn-style hairdo, which made a priceless photo op when he posed with the Barnum & Bailey “unicorn" -- another bizarre icon of that hair-fixated era. (John was a novelty star who would have gone a lot farther had he not tragically died of AIDS in 1990.) In the '80s, prime scandal gals you'd run into included Jessica Hahn and Donna Rice, who came to the public's attention for their involvement (which in Hahn's case, was allegedly non-consensual) with powerful men like televangelist Jim Bakker (Hahn) and Colorado Senator Gary Hart (Rice). There was also Michael's singing sister LaToya Jackson, who posed for Playboy to rebel against her family's conservative values while anxiously getting some ink for herself. Graced with a live snake and a reptilian husband, LaToya worked her connections to push her face onto every chat show in creation, just the way a 15-minute star should. I also found it hard to avoid Pee-wee Herman, Paul Reubens' comic creation who gleefully exuded weirdness in knickers and a giggle. Pee-wee had a children's show, starred in movies, and popped up on the Gotham promotional landscape, always staying in character in a way that was hilarious and apt for its time. Also adorable yet edgy, Dr. Ruth Westheimer -- a 50-something sex therapist with a zippy German accent -- became famous for dispensing wisdoms about condoms and orgasms, and her cuteness made it all palatable to the mass audience, until people moved on to the next roll in the proverbial hay. I loved it when, years later, she and I wore wedding veils for a Fortunoff's ad campaign!

Reveling in the 15-minute stars' notoriety, I had nightclub events where the guest stars included John Wayne Bobbitt (whose genitals were infamously removed by his wife in an unwanted transition), Divine Brown (the Hollywood hooker who almost wrecked Hugh Grant's career, though Elizabeth Hurley stuck with him for a few more years), and Mrs. Fletcher (the real-life lady, Edith Fore, who yelped “I've fallen and I can't get up" in popular commercials. Well, she got up for my party!).

As reality TV took over in the aughts, I stubbornly resisted its omnipresent personalities at first, until realizing that I'd celebrated people “famous for being famous" in nightclubs and tabloids for years, so why not accept them on the tube as well? I got to know Countess Luann de Lesseps, a “real housewife of New York," and found her to be even livelier than a reality star needed to be, especially over a clink-clink at an event. Much as I pooh-poohed the reality show trend, I found the real cast members irresistible, from enterprising Jill Zarin to ambitious Sonja Morgan to the Million Dollar Listing hunks and even The A List 's cast of motley gays striving for the spotlight. I even went on socialite Paris Hilton's show, The Simple Life, handpicked by her for my appearance despite my constant satirizing of her in the media. It suggested that Paris had the class to rise above it all -- and in our relatively brief time together, she turned out to come off pretty grounded, not like someone whose extensions were too tight at all. Confronting the 15-minute stars in the flesh forced me to reevaluate just how allegedly useless they were to the culture. After all, these short-termed icons not only provide copy for the gossip blogs, they actually exist, do things, have feelings, and sometimes end up justifying their fame.

Kim Kardashian? Her 15 minutes have extended to a decade, and I've pretty much stopped fighting it. Besides, when I interviewed her at a store launch of her product line, Kim was charismatic and well spoken -- everything a celebrity should be. A 30-minute celebrity, that is.