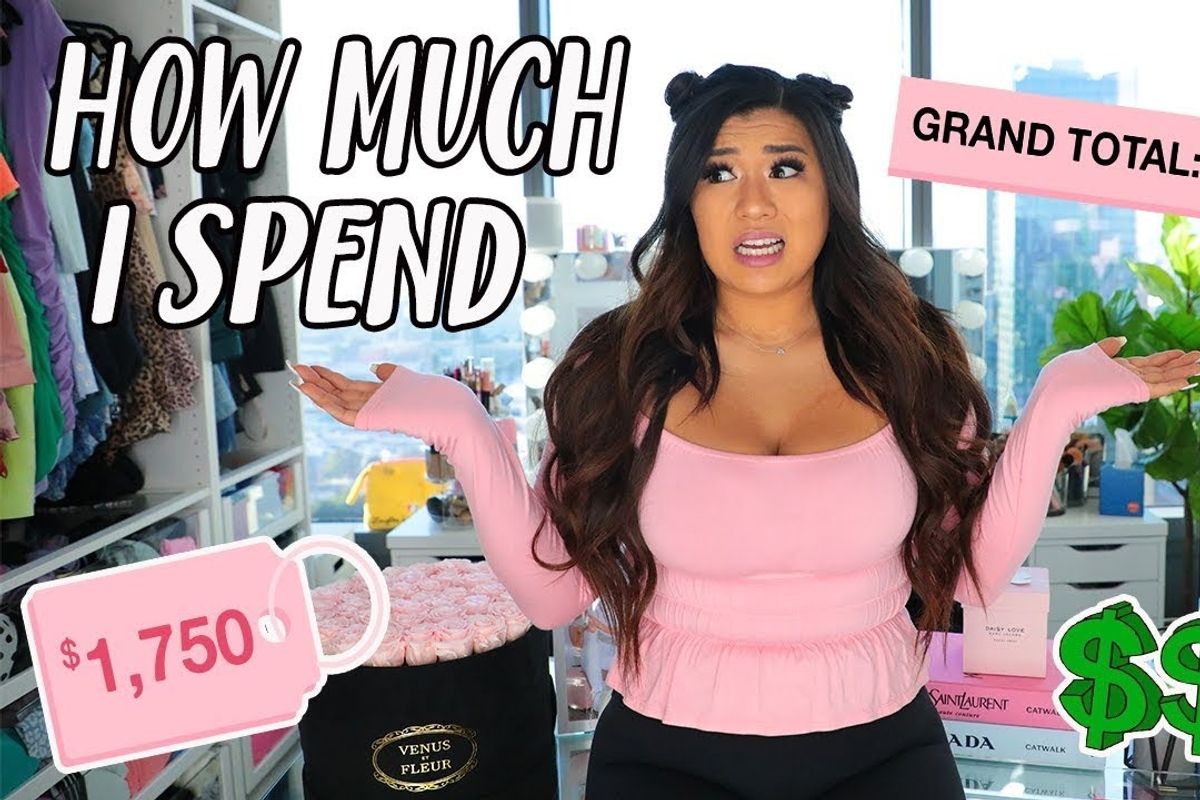 Will 'What I Spend' Videos Kill the Influencer?

If you've been on YouTube at all in the last two months, odds are you've noticed the "What I Spend In A Week" trend. Its concept is simple: YouTube creators –– mainly young women in their early twenties –– track their finances for a week and ultimately reveal how much they spent on food, transportation, and other expenses. The fad has received mixed reviews so far; while many viewers seem pleased with the creators' transparency, these videos have also exposed an outrageously lavish side of the influencer lifestyle that has left many fans feeling alienated and upset.

The first "What I Spend" was uploaded last October. Lexie Lombard's "What I Spend in a Week in NYC as a 23 year old" tracked her weekly spending to a grand total of $555.10. While this may seem like an outrageous amount of money for a young woman to burn in one week –– especially since this number does not include rent or transportation –– Lombard's peers were soon admitting they spent about the same. Or more. 24-year-old LA-based YouTuber Remi Ashten spent upwards of $3,000 in the week she filmed her video, while Cambridge-based YouTuber Brooke Miccio spent a total of $497 despite the fact that hers only captured four days. Many YouTube personalities have made jokes about their lack of fiscal responsibility –– "I'm out of control" Miccio proclaims in her title –– but viewers weren't amused, if the comments section is anything to go by.

The fan disappointment is fed by distrust. Most weekly totals include expenses such as food and public transportation but often failed to account for things like gas or monthly expenses like rent and utilities. Some viewers have even expressed suspicion that influencers are lying about their spending habits in the videos to seem more relatable. "This is so fun but I felt like you were trying to show us how little you can spend vs being honest about what you really spend in a week," a fan commented on influencer and University of Georgia student Danielle Carolan's "What I Spent in a Week."

These abject displays of privilege are also driving hate clicks. The "What I Spend" trend has exposed a darker side of millennial consumer culture, where monetization is the end goal of everyone's online brand. The gap between the "influencer lifestyle" and the lifestyle of many of their viewers has become increasingly clear over the past few years. Although many of the videos are titled "What I Spend as a Twenty-Something in X City" under the guise of relatability or even a budgeting how-to, many of the videos are filled with young women attending over-priced soul cycle classes, drinking $7 matcha lattes multiple times a week, and Ubering around cities despite several public transportation options.

This is perhaps what viewers take most offense to; the comment section of almost every "What I Spend" video is filled with fans expressing their disappointment in influencers for failing to budget or overspending out of convenience. "You should try to live off $100 a week," a fan suggested in the comments section of Remi's video, while another pointed out that Remi's weekly spending was the same as her college tuition for an entire semester.

To fully contextualize why this seemingly mindless spending is so frustrating for fans, we must look at how YouTubers make their income. According to a May 2019 video titled "How I Make That Bread" by YouTuber Best Dressed, many full-time YouTubers have three main streams of income. Adsense, a Google program designed for the monetization of websites, is normally a Youtber's main revenue stream, while affiliate links, or links that allow YouTubers to profit when their viewers buy certain products, and brand sponsorships make up the rest of their profit.

This means that a YouTuber's income is dependent on how many people watch the ads at the beginning of their videos and buy the products that they recommend. It makes sense then that viewers, who have most likely helped an influencer's growth by keeping up with their videos or trusting their recommendations, would therefore feel invested in a YouTuber's lifestyle or choices. It's obviously discomforting for a fan to realize that they directly contributed to their favorite Youtuber's lavish lifestyle — especially if they formerly assumed them to be on an equal footing financially.

In one sense this is just another YouTube trend, but "What I Spend In A Week" videos are forcing conversations about class online. It's not the first time that YouTubers have been in hot water due to ignorance about class privilege: for years, viewers have also expressed discomfort over the growing "thrifting" trend that's taken over YouTube wherein wealthy influencers shop at thrift stores just for the fad. While YouTube is theoretically one of the internet's most democratic mediums, it has become clear over time that many young creators were born into significant privilege, growing up with wealth long before their online careers took off and the sponsorships started rolling in. How else does someone afford cameras and tripods in middle school, anyway? As a result, when we picture an "influencer," we picture someone young, wealthy and white.

In theory, the "What I Spend" video trend was doomed to fail from the start. Many YouTube personalities originally garnered fame because of their relatability, so exposing the extravagant lifestyles that their online careers have afforded them effectively kills this facade. As monetized, sponsored videos become the YouTube norm, we can surely expect backlash to grow, especially as conversations about wealth and class continue to creep into the mainstream. And if viewers ultimately become fed up with mindless consumer culture, the monetized influencer will become extinct.

But that's an uphill battle for the anti-capitalist YouTube fiends among us. Many of YouTube's most well-known faces are open about their pursuit of the good life — the most popular young content creators, including a new generation of TikTok stars, move to Los Angeles and rent out clout mansions where they live like Hollywood celebrities. So while some viewers are understandably upset over this ostentatious display of wealth, it seems that many fans aren't exactly taking influencers to task — more like trying to emulate their success.