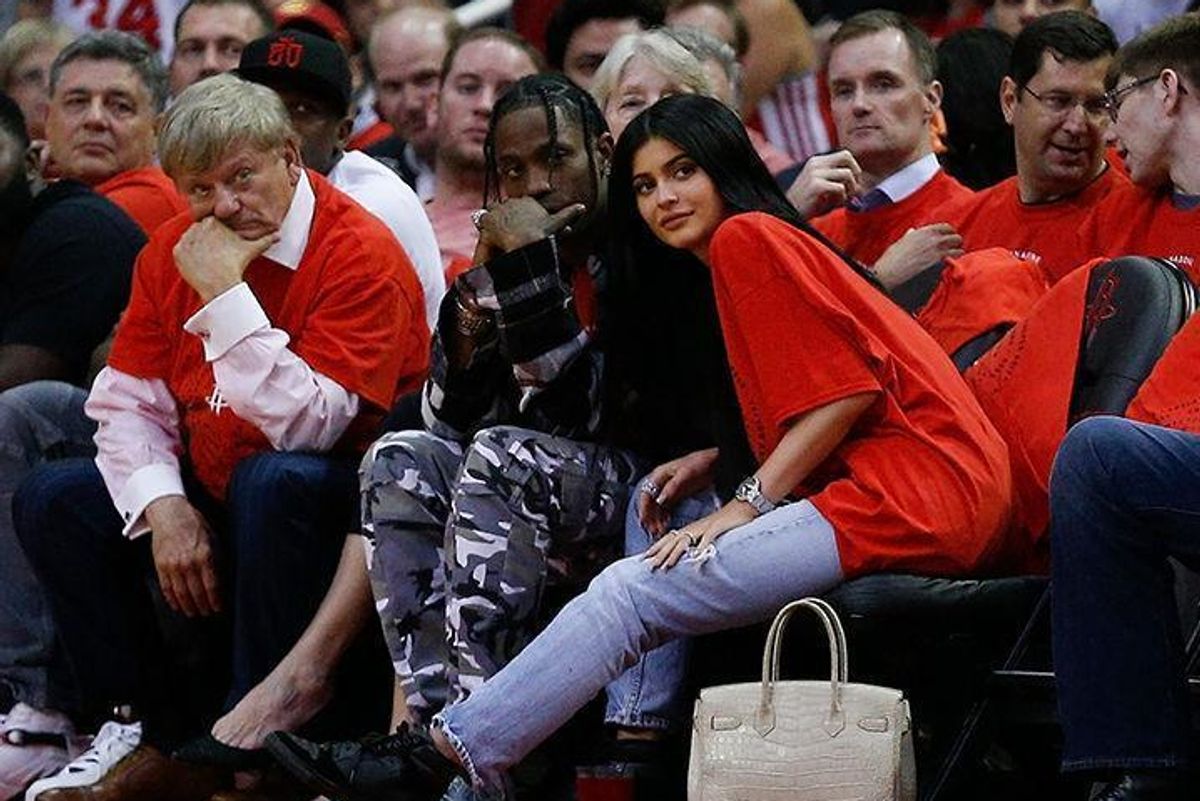 Although another rapper/Kardashian-Jenner union is nothing new, there has been a fair amount excitement with regards to the reported romance between one of the biggest young stars in hip-hop and one of the most influential teenagers on the planet: Travis Scott and Kylie Jenner.

Kylie's alleged relationship with Travis Scott marks the first time the young make-up mogul has been affiliated with any one celebrity since Tyga, who she first met at 14 and dated on-and-off over three years. While this rumored (and now confirmed) relationship has been producing massive amounts of publicity for both, it's the kind of publicity, specifically the media's coverage of this 19 year-old's dating/sex life, and how it stacks up against that of other members of her family, which is particularly concerning.

While the most affectionate the two have gotten publicly holding hands and sitting next to each other, TMZ's coverage of Kylie and Travis's recent public outing (she sat court side at an NBA game with the rapper in his hometown of Houston) is grossly sexually explicit. The way they insert the word "bang" alone, probably the worst way to refer to sex, is frankly alarming.

"Kylie Jenner and Travis Scott jumped from holding hands at Coachella to holding way more at an NBA playoff game, and yet ... they're still in the heavy flirting with a chance of banging stage," the article begins – for the record, he had his hand on her leg.

It continues, describing their time spent at Coachella: "We're told they were super flirty in the desert, and although nothing was consummated ... all signs point to it happening soon."

"From the looks of it, they moved a BIG step closer to banging in Houston."

Then yesterday, when the relationship reportedly became official: "Kylie Jenner and Travis Scott Not Just Banging, But Real Deal Couple", accompanied by this innocuous video.

This is the same outlet that obtained these photos of A$AP Rocky and Kendall Jenner (who have reportedly been seeing each other for almost a year) while they made frequent appearances together in Paris. Despite the obvious intimacy of the images, TMZ only implies the two are more than friends, which is clear to just about anyone with eyes.

"If it's just friendship," the author writes, "... they're really good friends."

Almost the entire coverage of Kendall Jenner's budding relationship with A$AP Rocky follows this relatively demure vein, even in the smuttiest articles, each report refers to their dating as something rooted in love, something with longevity. Even when sources have reported the two "all over each other" that Kendall is "casually dating" the rapper. Kylie Jenner, alternatively, has gunned straight for the seduction, in a "skin tight" dress no less.

The same could be said of Selena Gomez's courtship with the Weeknd. The starlet, who is openly religious and made it clear she was publicly wronged by former boyfriend Justin Bieber, has long been depicted in the media as the traditional "Madonna." When she started dating the Weeknd very shortly after his break-up with model Bella Hadid, coverage focused on the couple's "love fest," and how Bella was dealing with the news (revenge via sexy selfie, of course, or revealing jumpsuit). The possibly risque elements of their relationship were downplayed.

This disparity speaks to a larger issue about how society approaches young women who not only embrace, but express their sexuality to engage an audience. Kylie has been well-monetized for her outrageous figure, something we're reminded of repeatedly in scrolling her Instagram feed. This is, of course, her right and has boosted her appeal to the point where she has almost 20 million more followers on the app than supermodel sister Kendall.

While Kendall certainly posts photos that reveal just as much, if not more, of her body than Kylie, Kylie's admission to altering (at least) her face to maximize her looks seems to have given outlets the green light to reduce Kylie to nothing less than a sexual being – a mere embodiment of the male fantasy only good for one thing. Despite the fact Kylie was clearly in a loving relationship for a significant amount of time, it's her "fuck-ability" that should be our focus, whereas Kendall, the more "natural" of the two, is of course more dateable. Kendall is classy, Kylie is trashy.

Even Twitter has been overwhelmingly negative towards the relationship, the consensus being that Kylie wasn't good enough to date Travis.

Although we're certainly moving forward in how we embrace women who profit off their sex appeal, it's important we understand sex itself is not all they bring to the table. Kylie, now the second-wealthiest member of the Kardashian-Jenner clan and Fast Company's 57th "Most Creative People in Business 2017", can be credited for more than just her pretty face. As of right now, our eyes are wide shut. The sooner we understand "fuck-ability" does not render a woman more or less worthy of real love, from both potential partners or the public, the sooner we recognize women have more to offer than playing the role of the angel or the vixen.