How syd B Freed Herself

Imagine embarking on an overseas trip you're totally hyped for: It's your first big adventure, and you're chasing culture you love, hoping to dive headfirst into your inspirations. But right away, within days of landing, you realize that your travel partner — who also happens to be your romantic partner — isn't right for you. In fact, they're holding you back, both in terms of the trip and in life, period. What do you do?

Twenty-year-old syd B found herself in that exact situation shortly after arriving in the U.K., an expedition she'd been plotting since becoming enamored with the music and fashion of particular contemporary scenes there. An upset like that could have ruined everything, but instead, the L.A.-born and based musician stood strong. This was her trip, and nobody was going to thwart a thing about it.

In the three weeks that unfolded, syd gained new understandings about herself. In making the connections she'd hoped for, she learned firsthand how who you let in — and who you keep out — can affect your state of mind, and your creative workflow, too. She crafted "Free," a smooth, electronic R&B earworm of self-empowerment, in response, and the exercise proved cathartic. It stands as a tribute to the revelations she had during that trip — a reminder that, while you should give to others deserving of your support, it's paramount to take care of yourself and your needs, too.

"Free" is the third single from syd B, following the electronic pop-leaning "Claws" and the soulful slow-burner "Feel Love." PAPER chatted with the artist about how her U.K. trip is reflected in this new single and more, including what to expect from her forthcoming debut album. Check out our conversation, below.

What kind of musical influences got you to where you are now?

I actually thought I was going to be a dancer for a long time. I have a really heavy dance background. But I grew up with my mom listening to Joni Mitchell, James Taylor — really great, classic songwriters. It's in my blood that way. I definitely have a heavy folk background; I started songwriting through my acoustic guitar. Through dance I found the hip-hop route, and found R&B music, and that really moved me. I left dance because of an injury and decided that the music actually was what really interested in me in dance, and so I started getting into the studio and writing little songs. Then I applied to Berklee [College of Music] and it went really quick after I decided to major in that in college. I found what music I wanted to make, and started making it.

Let's talk about "Free." You called your trip to the U.K. one of the most pivotal points of your life, explaining that the self-discoveries you experienced there inspired the song. What compelled you to go to the U.K. in the first place?

I had just turned 20, and London really interested me: the fashion, and all the music I was listening to and still do was coming from the U.K. So I was like, I wanna go, and meet everyone that I listen to and try to connect with those artists. I just booked a flight — it was the first time I was going to travel all by myself. I had a boyfriend at the time who came with me, and some shit went down right when we got there. I just realized a bunch of stuff, like within that first day, even.

I was like, I really just need to focus on myself right now. I am in a new place with new people and I have a lot going on. I made the decision to really, really focus on myself and my projects, and put all my eggs into this basket. I met so many amazing people in London. That's actually where I met my current manager now. He set me up with a bunch of meetings and I was just going to shows and meeting with young artists like myself and really immersing in the culture. It was just so great to be away from home by myself. I realized a lot about myself.

And then you wrote "Free"?

I actually wrote that with [producer] Narx probably three days after that whole thing went down. It was like, OK, now I've put it into a song, into a piece of art, and then I was over it [Laughs]. It was just very therapeutic. And he was great, it was so quick; it came so fast. And yeah, it was just cool that I made it there, and I had this little souvenir to bring home with me — along with other songs, but this is my favorite.

That must have been so jarring, to have something like that happen immediately after arriving.

Totally. I was like, Well, now I'm really all by myself. But it ended up being much better, and I got so much more done.

You also noted that this song is about leaving behind what's not serving you.

I met so many great people in London then I came home and just wanted to surround myself with mostly creative people so we can feed off each other. All the people that I met either did photography, fashion, stuff like that — anything creative. And it's really helped me to be creative, being around people that are like me in that way. So my mindset just really changed there. I felt really powerful when I came home. 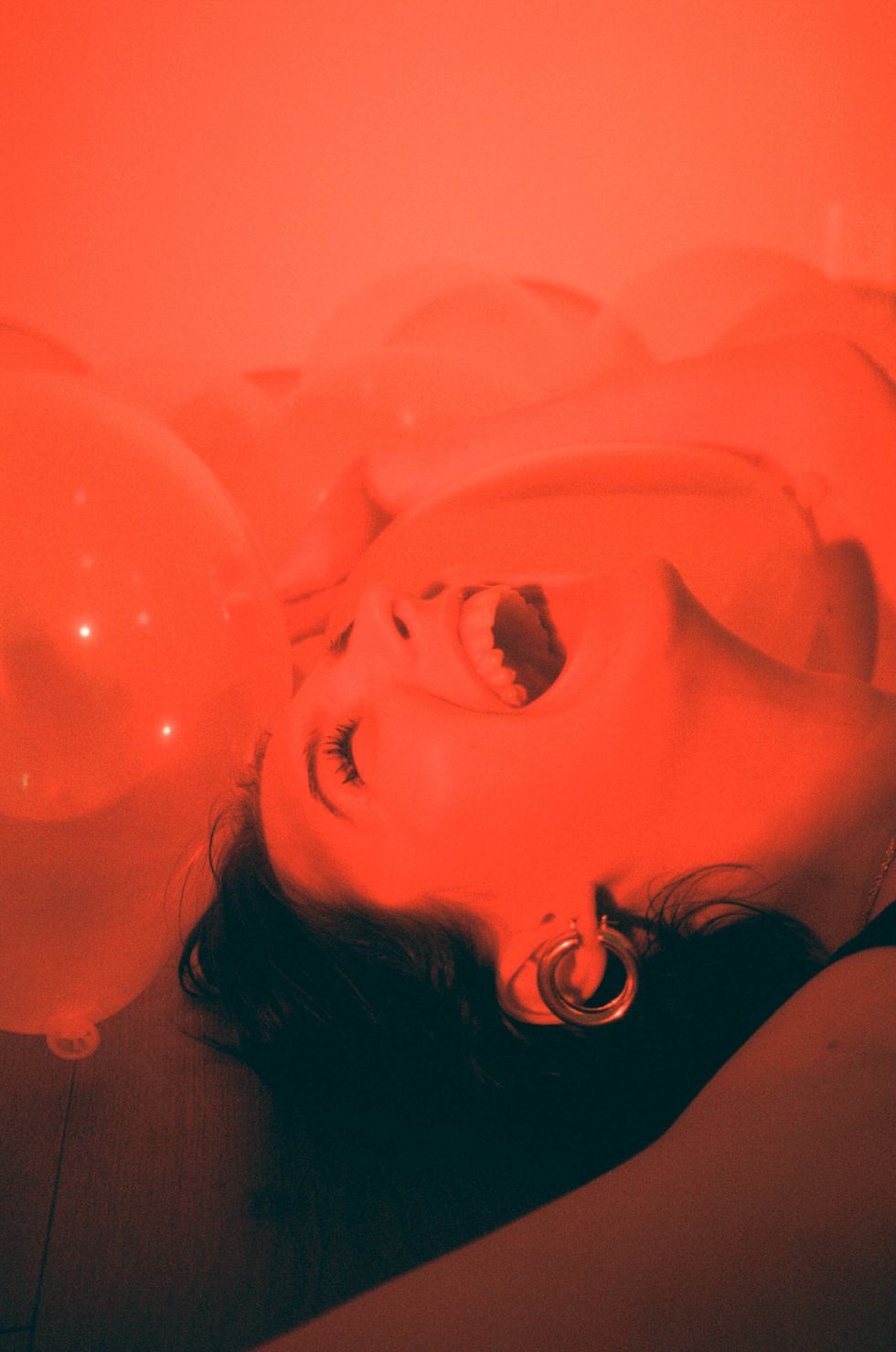 You also talked about how putting others before yourself can be harmful. Has that been a constant theme in your life? How do you balance maintaining a crew, exchanging and promoting mutual support, but also ensuring you're putting yourself first?

That's something I get from my mom. Just being very selfless; I think that's a great quality. But sometimes too much of it, like if I overbook myself because I want to do all these different plans and see all these different people, then I don't have time to be creative myself. I've just had to be assertive lately, and really focus on my own projects but also put those people that I want in the project, who actually really want to be in it, that's been important too. Seeing who is really passionate about my project in those creative groups in my life, who are in it for the right reasons, so that it doesn't harm myself, and they're not in it for something else. But as for relationships and love, in the past I almost gave too much — when I don't get even half of it back. I really realized that in London. I was like, I'm not getting any of this back, so I have to leave, and next time I have to see that early on. Because I know what I deserve, and if I see that I'm not getting it, then that's not really fair.

You're really fortunate to have learned that early on, rather than later in life. I also wondered about your music-making process — what's that generally like?

LIke I said, I come from a folk background, so I have a couple different processes depending on who I'm working with, but I really love sitting down with my guitar and starting from scratch, just me. That's how "Claws" came out. I wrote that on my guitar by myself and took it to a producer. WIth "Feel Love," actually we made the beat and the track first, then just wrote something over it. So that's another type of process that's always fun.

"I know what I deserve, and if I see that I'm not getting it, then that's not really fair."

That's super fast, and it doesn't sound unresolved in any way. I wouldn't have guessed it took so little time.

It was great because I got to record vocals there and we ended using the first vocals that we did. So I didn't ever have to send anything; it was all done there.

Can you tell me more about the album? It's out later this year?

I don't want to give too much away, but we're aiming for November. It's going to be a big chunk of my heart that the world will get to hear and it definitely has a concept to it, which I'm really excited about, because I love stories. I'll actually be in London when it comes out.

You'll be back in London?

Yeah, I'm going to London at the end of October. And we'll do a little release show there and details to come, but I'm definitely really excited to be back there.