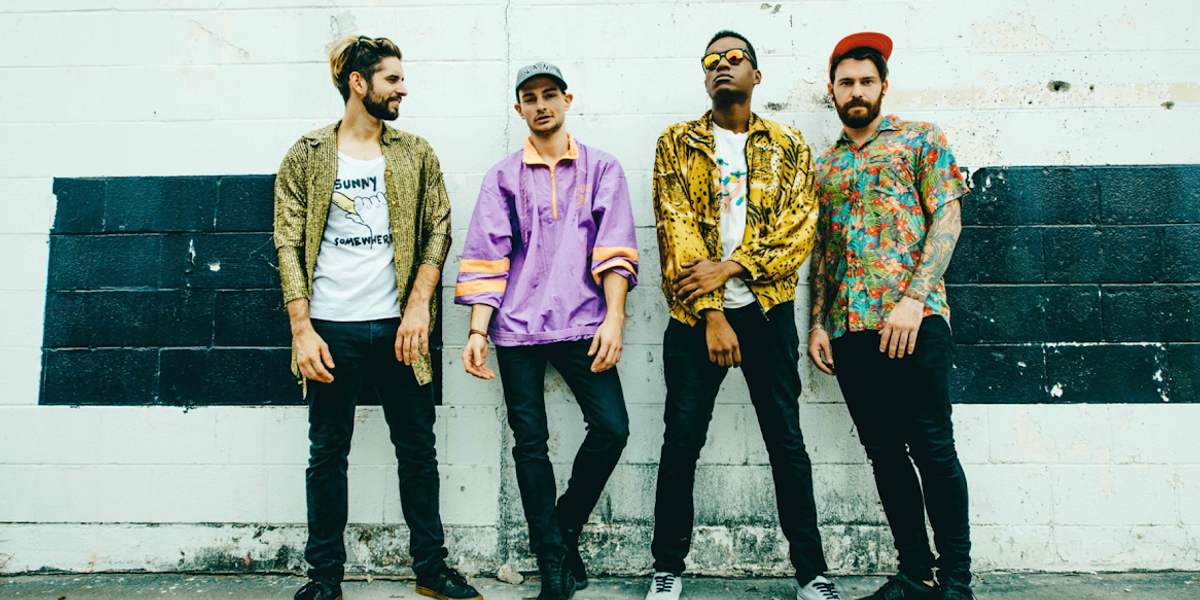 Austin-based four piece Swimming With Bears make danceable alternative-soul music marked by lead singer Joe Perry's winding, cheerful vocals. They released their self-titled debut album in 2016 which created a lot of buzz. After being invited to open for Weezer and Panic! At The Disco, they embarked on a national tour. Now, they're premiering their first music video for a new song called "French Girls." They plan on releasing new music throughout the year.

In their new Jon Conner-directed video for "French Girls," sharply-dressed singer Joe Perry croons from a convertible, a sidewalk, and a live performance with the rest of the band, all the while yearning for, "all the pretty French girls strutting down the boulevard." He often breaks the fourth wall, establishing a knowing, winking relationship with the camera. Some of the lyrics (as well as maxims like "This film will self destruct" and "Break the rules") show up next to the footage in French. Paired with the red white and blue of the French flag that flashes across the screen, the video drives home a reverence for all things French.

Perry says of the video, "Our first video! We couldn't bring everyone to France so we brought a little sumthin something French to all of you. Take a look!"

Director Jon Conner says that he enjoyed making the video, which was inspired by French New Wave. He said, "This music video pays homage to French New Wave filmmakers from the late 1950s-60s. They broke the rules of what was standard in their time, so I wanted to harness their brazen spirit, style and ideology and translate that to a music video. We had a lot of fun putting the band into iconic scenes from this era of film and letting them do their thing within that realm. Swimming With Bears has a lot of colorful style and charisma that I felt worked well within the genre. We all agreed that we wanted to do something fun and different, so in order to truly pay respect to these auteurs, we had to break the rules of boilerplate modern music videos ourselves."

Check out the PAPER premiere, below:

Catch Swimming With Bears on their upcoming tour: