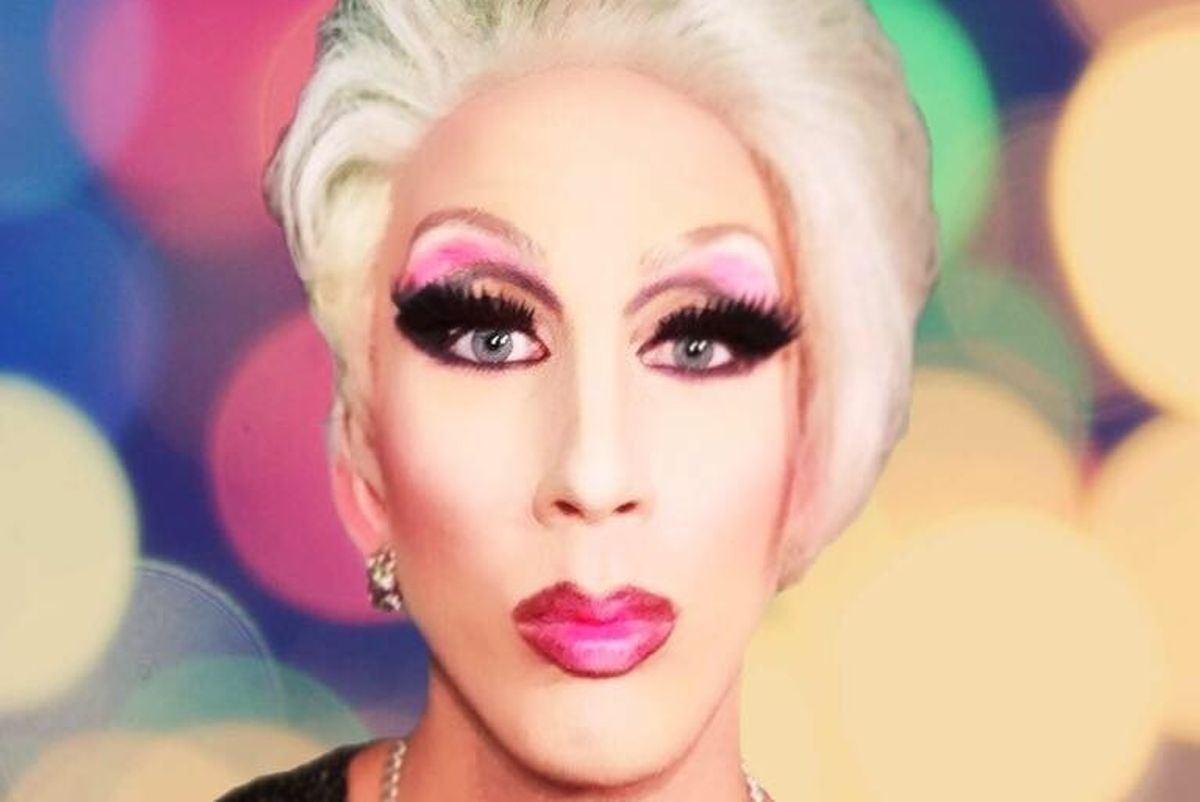 With seven Glam nominations this year, Sutton Lee Seymour has come into her own as a drag star, dabbling in the Broadway idiom with fresh takes on familiar show tunes. With Justin Luke and Cacophany Daniels, Sutton has done Broadway Mondays at Hardware Bar for three years now. Sutton also does Wednesdays at Industry Bar with Sherry Vine, plus a Saturday night show at Albatross bar in Astoria, monthly appearances at Stonewall, and sometimes she appears at a drag brunch in Connecticut called Pink Eggs and Glam. Still not enough Sutton for you? Here's more:

Hello, Sutton. Where do you hail from?

I'm from the northern suburbs of Chicago. Winnetka.

Just like Bette Midler. I studied theater at Western Michigan University in Kalamazoo. From "Big Noise From Winnetka" to "(I've Got A Gal In) Kalamazoo." All these wonderful songs about places you never heard of or knew existed. I've been in New York for about 10 years. It wasn't till about five years living in New York that I became a drag queen.

How did that happen?

Drag always excited me and frightened me. I've been friends with [drag performer] Paige Turner for a couple of years and before I became a drag queen, I was going through a pretty hard breakup. Paige said, "You need to do something to stay active." I'd do her Gay Pride "Virgin" show—for first-timers, at New World Stages. I put together a medley of Patti LuPone, Eartha Kitt, Liza Minnelli, and Carol Channing and I thought, "Oh my god, this is gonna go over people's heads. People want Britney, people want Beyoncé, they're gonna hate this." I performed and got a huge reaction, much to my delight. Before that, I'd done drag for holiday parties, but I'd never thought about it as a career.

After that "Virgin" show, Paige invited me to compete in So You Think You Can Drag? (at New World Stages), which I didn't think I was gonna win, but I won. That gave me my first weekly show, at New World Stages at the Green Room. It started in January 2014 and ran for about a year and a half. I learned a lot. I haven't stopped since.

So you're making a living from drag?

It's my full time job. I guess that's everybody's goal. I want to be a full time performer. I had a conversation with Bob the Drag Queen shortly before she became a RuPaul's Drag Race superstar. She said to me one day, "When someone says, 'Here's a job, 'you have no excuse to say no. You have to make a living and you've got the time."

If performing ever falls through for you, do you have a backup plan?

No. Because my roots are in theater, there's always been a survivalist mentality in me. When you're a kid growing up, saying "I want to be an actor," everybody always tells you, "Oh, it's a hard life. There's not a lot of job opportunities, so you're gonna have to make it work and figure out how to pay all the bills." So the idea of everything falling through doesn't frighten me because I've always been aware of that risk.


You do a lot of Broadway-oriented material, which is great. Does that only appeal to certain people or is it across the boards?

It's definitely attracted all types of people, which I love. I've been meeting people who've never seen drag shows but love Broadway theater and they come to my shows and I'll spoof a musical or two. And I'll meet people who are theater traditionalists who love my quote-unquote old school style of drag that they claim they haven't seen before, which is nice to hear, but I'd encourage them to broaden their horizons because there's a lot of talented drag queens in the city.

What's also fun is meeting a young generation who might not know a lot of Broadway musicals, but seeing my shows, they'll learn something and maybe go out and buy a ticket to a show I was making fun of.

What are some of your numbers that go over really well?

I do a version of "Forget About The Boy" from Thoroughly Modern Millie. I tap dance in that, but I also splice in Diane Keaton's monologue from First Wives Club, the one where she's going, "I'm sorry that I met you" and it goes right into the song and people just love that build up.

I'm pretty well known for doing full length musicals and making them five minutes, I do Chicago in five minutes and play both Velma and Roxie. I do Wicked in five minutes. I'm about to debut a new Grease mini musical where I'm Danny and Sandy. I feel like an insane person, but it's fun.

Have you ever auditioned for Drag Race?

I have. You just got to keep trying. But I can't put all my eggs in one basket. Drag Race is not the only opportunity out there, so while I'll still keep going for that, I have to keep going for the other opportunities that help me pay my bills.

You had that terrible breakup. Do you have a significant other today?

No, I'm still single, which is fine. I can take all that I put into somebody else and I can put it back into myself. And we're still friends. I don't want to give the wrong idea. We're pals.

Do guys like you in drag, out of drag, or both?

If they've got like a mother complex. I don't meet a lot of people who are interested in me because I come off as an older character. As myself, I'm a quiet guy who wears a baseball cap and glasses. I sit at the bar and chat with my friends. I try to turn the show off when I get out of drag. That disappoints people.

Prescott. It was a hell of a time through high school. I went by Scott for a lot of the time.Then a theater teacher said, "If you don't go by your name, I'll kick you out of the department." Seymour is my actual last name, which is where the drag name came from. That comes from people saying, "Your last name is Seymour? You should sing 'Suddenly Seymour.'" The lightbulb went on over my head.

It's the closing number for all my shows.

I sometimes make a mistake and call you Sutton Lee Foster. It's so dumb.

I'm a huge fan. I tell people, "If you're looking for me on social networks, look for her and I'm the drag queen underneath."

Who's your number one Broadway star? Patti?

Honestly, I think it's Bernadette.

So you're living for her in Hello, Dolly!?

You knew this would happen back in high school? Sounds like you're psychic. People should come to you for some casting energy.

I believe in putting energy out in the universe.Sometimes it'll give it back to you.