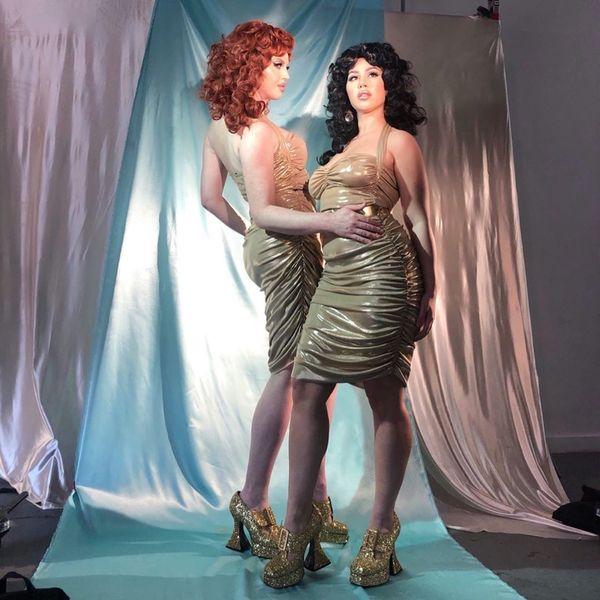 So much has gone down since Trump took the U.S. presidency in 2016. Chief among the changes: the gradual stripping of rights from marginalized groups, including immigrants, LGBTQ people, women, and people of color. One imposition was Trump's signing last year of SESTA/FOSTA, a controversial bill that aims to prevent sex trafficking, while making survival-based and consensual sex work more dangerous and prohibitive than ever. Just to name a few consequences of the bill, in the weeks following the law's passing, portions of Craigslist were taken down, federal authorities seized Backpage, and even Google began cracking down on terms of service around sexual speech. Activists and sex workers alike believe the law puts the most vulnerable sex workers in danger, specifically trans women and women of color.

New York music duo and wives Ruby and Queenie form Sateen, a group that has often been outspoken about political issues affecting marginalized communities. From their 2017 self-titled debut EP till now, they have created disco-indebted music videos, songs, and images encapsulating their love for each other and their desire for a better world. For their first single and video in the two years since their debut EP, "Gotta Gimme Your Love," out now, they are sending their most powerful message yet.

"We believe that sex workers are discriminated against, that we wish be decriminalize sex work, that we believe that that's a position that we are taking a strong stance on," Ruby says. "Decriminalization, sex workers that have been convicted should be decarcerated and have those convictions stripped from their records. As a society, we must start destigmatizing this, and end the violence against sex workers now."

For their self-directed video, Sateen took on a heavier issue with a more lighthearted approach as a way to bring people into a more empowered view of sex workers. They adopt a vintage peep show aesthetic, where men are props and they, Queenie and Ruby, are powerful and in control of their bodies and narratives. Sonically, the song is a gorgeous, catchy disco anthem, largely meant to amplify sex workers, queer people, and anyone else society deems unworthy of love.

PAPER caught up with the duo to talk the new video and statement, the first of more new work to come, and what they've been up to the past two years. They get candid about Ruby's ongoing transition, their status as trailblazing independent artists, and why Joan Jett is a key inspiration.

Tell me a little bit about the song and the video and how it came together.

Ruby: The song is kind of like a continuation of our last song "Blacklisted." We're going for a similar mood of a really gay disco vibe that was about empowerment. So it was like another gay empowerment song that was meant to inspire mostly queer people, but obviously we always try to take it beyond that. This one is about being loved as a queer person and sometimes the difficulties of being respected as a queer person. Sometimes, you are treated like a taboo, or trans women especially are super fetishized. More than anything, this a song for sex workers. That's what the video is about. Queenie and I play sex workers and we wanted that visual with it. We wanted to look beautiful and feel really empowered.

Even the peep show/voyeurism aspect of the video comes from that place.

Ruby: We wanted the men to look like they were props almost. As women, we wanted to show we were really in control of that situation, despite the fact that we were the sex workers, to show that we were doing that not as an act of desperation, but as an act of autonomy. We wanted to show a side of sex work that isn't about desperation or devastation, in the interest of normalizing it. The attitude was, This is our job, we make good money doing this and you're just our patrons here, like at any other job.

​When you wrote the song, what made you decide that this would be the one you'd announce your comeback with?

Queenie: When we wrote "Gotta Gimme Your Love," we're hearing a lot about our friends' experiences as marginalized people of all different kinds of intersections: fat people, people of color, sex workers, trans women and then the people — mostly cis hetero men — who weren't really respecting their humanity. You're not going on real dates and parading this person around like they deserve to be, but hiding in the shadows and only approaching them as a secret. We wanted to stand with them and say "you deserve love and you deserve for your humanity to be respected."

What have the last couple of years before this release been like for you?

Ruby: We've been working on music and we've been still doing a lot of shows, but so much of it has been dictated by my surgeries. Sometimes people look at us and think we're doing well. But surgery and transitioning is such a real part of my life and our life together. Over the past two years, that process has probably taken up three quarters of that time, even with me just recovering, I had complications which I had emergency surgeries for. It's a lot and I think again, this is one of the reasons why we felt like this was an important song to address specifically trans women. Because everything about our lives is difficult. Everything. We can't get anything accomplished in a "normal" way. Everything comes with extra obstacles. So I think our career really reflects that. We don't want sympathy about that, but it's just a fact.

For what it's worth, the execution of your art is always outstanding. An outsider might look at your work and have no idea you both go through so much to make your vision a reality.

Queenie: Well, thank you. Our being independent artists is a really interesting path. Add to that we're queer, Ruby is trans, and we're not necessarily making a type of music that is trendy or popular. We're really steering something that is individual to us. We don't have a manager, we don't have PR, we don't have a booking agent, so whenever we do something, whenever we're on tour, it's because we negotiated what we needed to and made it work.... We don't have the industry behind us to propel us forward. It's like whatever we have, whatever listeners we have, whatever people come to our shows is from what we have promoted through our Instagram. People follow us just for pictures of hot girls, some people follow us because they like that we're queer.

Queenie: A fraction of those people have also been basically harassed by us into actually listening to our music, and then they're like "wow this is actually good, I feel like a loser for not giving this a chance sooner." It's just funny because here we are, and I've always said "here we always will be," just doing our thing. Hopefully people start to take it more seriously, because it's real serious to us.

As a music duo in the public eye and as a couple, you're sort of the first of your kind. What are the ups and downs of that?

Ruby: For one thing, we're not always treated well by the people who put events on, we're not treated well at the events by the people running the shows or doing the sound. We're disrespected at every turn and it's because of who we are, how we look and our relationship. I think that to have to go through that is honestly traumatic, and I think we do have a lot of PTSD from experiences along with our journeys of performing. We don't like that, we don't like hiding and we won't hide. We want to come out and perform and then meet fans, and spend our energy on that because that's what we love to do.

Queenie: There's this amazing Joan Jett documentary we were watching, and I started crying because I was like "wow, this is so similar to our experience." With the Runaways, it was a group of these young, hot, fearless girls, and they were literally abused by everyone because they made rock music. Especially when they were like, This is actually a band, this is not a joke. It's not just a little shtick. This is real music, we're real musicians. Men and the industry treated them like shit, people threw bottles at them, people threw giant equipment at them when they performed. They were treated like a joke by their peers too.

"Listen, if we're not gonna be accepted, we're still not gonna stop. And we know we can change the world, that's what we want to do."

Ruby: Then after their success with the Runaways, Joan Jett had Bad Reputation, a record full of bops, including "I Love Rock N Roll" and the title track. And record labels told her it wouldn't work, that the songs weren't good. Can you imagine? .I also didn't know how Joan made the first Germs record, I didn't realize she was standing for women who were rape victims in a time when few were. She was doing all this stuff and I realized that was what her career really was. I think that's what we kind of put our heads down and said to ourselves, Listen, if we're not gonna be accepted, we're still not gonna stop. And we know we can change the world, that's what we want to do. We don't really care at the end of the day if we're treated like a joke, because we know we're not.