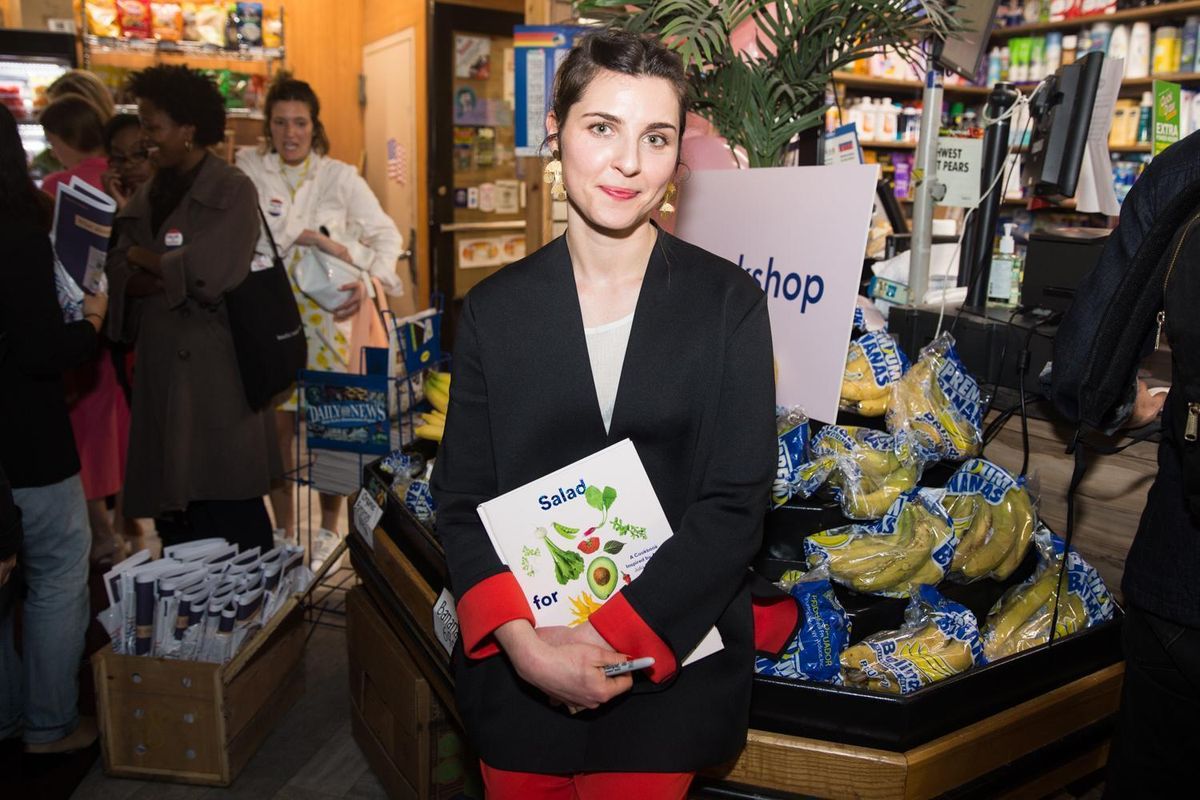 Talking to Julia Sherman About Her Salad for President Cookbook

Last Thursday, anyone passing by the Key Foods grocery store on Fulton St. in Brooklyn's Clinton Hill area would have noticed an unusual sign on the door: the grocery store was closed early for the first time in its 50-year existence. The family owned branch of the local chain, which once employed Biggie as a bag boy and where Lil Kim supposedly used to try to sell weed in the aisles, was playing host to artists, musicians, chefs, editors and more who had come out for the launch of Julia Sherman's artist-inspired cookbook Salad For President. Based on Sherman's popular blog of the same name, the cookbook shares salad recipes by, and interviews with, artists from Laurie Anderson to Tauba Auerbach, William Wegman to Yui Tsujimura, along with slow foods OG Alice Waters and artist/community organizer/urban gardener Ron Finley thrown in for good measure. In between the recipes for shaved baby artichoke and marinated mushroom salad or tangy farro salad with Moroccan cured olives, lemon zest and fennel are delightful illustrations by Joanna Avillez and layouts designed by Apartamento's Omar Sosa. Staying on theme, the party, sponsored by Chop't, featured vegetal cocktails and salad bites from the book and guests had the chance to do a mini 'Supermarket Sweep,' purchasing items off a checklist that would be donated to the Wellness in Schools non-profit. And now, ahead of the cookbook's launch on May 16th via Abrams, we caught up with Sherman to hear more about her blog's early beginnings, her most memorable salad sessions and the Alice Waters recipe that surprised her.

Tell us about the origins of your blog Salad For President.

I have always had a thing for salad. In high school, a mixing bowl full of arugula and parmesan was my stoner munchies staple, and I prided myself on knowing where all the best Greek salads in the city could be found. But I never imagined then that I would actually work in food, despite the fact that I thought about it all day long.

The period after I got my MFA in New Genres at Columbia University (2011) was the real turning point for me. After finishing that highly competitive program, I found myself isolated in a shitty studio on the 6th floor of a storage facility under the Manhattan Bridge. My neighbors were the HQ of 24 Hour Energy drink, and a Crossfit gym, whose clients dragged tires and chains down my long unventilated hallway all day long. My dreams of an active, engaged artist community had dissipated. Suddenly, it felt like it was every man for himself, and I soon realized, I was much less interested in contributing art objects to the market than I was invested in the dialogue amongst artists themselves. I still had work to do to find my place, and it began to be clear that it wasn't going to be by selling my work in a gallery.

It was time for me to take a closer look at the things I was doing everyday without a second thought. I am at peace when I am in the kitchen, much more than I ever was in the studio. I am able to share my food and writing easily, effortlessly, and with excitement. So my husband insisted I start a blog, confident that this would be a right way to synthesize my writing, photography and cooking skills. Soon, I was blabbing about Salad for President everywhere I went, and artists began to ask me if they could publish their recipes on my budding platform. All of the sudden, my blog was taking the familiar shape of so many of my art projects: Participatory and experiential, research and text-based with lots and lots of photos. After working in such a competitive art world, it was really refreshing to be able to position myself so I was working with chefs and artists, celebrating their practices and supporting my own at the same time. Only an artist would wear so many hats without thinking twice.

A perfect salad is all about balance and restraint. It doesn't get better the more complicated it becomes. Instead, the simplest salads are the most elegant and the most economical expression of an idea, a vegetable, a pairing of two flavors. It's a lot like art actually...You know it when you see/taste it, and you immediately say, "why didn't I think of that?"

I don't think you could ever exhaust the topic -- there are as many salads in the world as there are vegetables! Infinite variations. Plus, when you serve a big salad, everyone walks away feeling good, like they did something positive for themselves in eating dinner, without making any sacrifices. (I hate making sacrifices.)

Who have been some of your most memorable guests?

Oh, there have been so many! Looking at the book, I would say that Harry Gesner, the mid-century, Malibu-based architect was one of the most fun. I had discovered his work while building the second of my Salad Gardens at The Getty Museum. Harry built the original house on the Getty property, a bachelor pad with a swimming pool that flowed right into the living room. It was a wild space with an indoor fern garden and views of the whole city. He is an inventor, and gardener, a war hero and an amazing conceptual architect. After seeing the house, I did a bunch of research on him and I tracked him down. I called him and invited myself to his house on the ocean, just south of Zuma beach.

He got really into the whole salad-making process, wearing a chef's hat, letting me climb all over his kitchen counters. A couple of hours into it, he realized I was not who he thought I was. He had confused me with an architectural historian who had called the same week, also inquiring about his house at The Getty! He was wondering the whole time, why this academic was so obsessed with salad?

Laurie Anderson is also just my all time favorite artist, so the chance to have lunch with her was a dream come true. I taught her how to use Snapchat filters, that's something I would like to add to my CV.

Were there any recipes that surprised you?

Oh yes, for sure. Alice Waters made her classic goat cheese and garden greens salad for the book, which didn't surprise me at all. That salad is an iconic Chez Panisse recipe.

After hours of cooking, eating, talking, looking at her beautiful collection of hand-dyed silk tunics, she anecdotally mentioned that she eats a leftover salad taco for breakfast. I made her give me the complete download on that, so we added that recipe to the book as well. You can't make a salad book without giving people some ideas of what to do with their leftovers...My favorite part was when she admitted she eats the taco standing up. I love the image of the mother of the slow food movement, scarfing down day-old salad tacos for breakfast on the run.

Greek salad from the coffee shops that used to be all over New York -- Joe Junior's was a good one. I still crave that salad pretty much everyday -- so simple, classic.

What is your favorite salad to eat now?

Pretty much anything crunchy and green, doused in my lemony, salty anchovy dressing. I could drink that classic dressing with a straw.

When did you decide to turn the blog into a cookbook?

As someone who never consumed blogs, but who loves books, I always knew Salad for President was destined for print. I just never thought it would happen so fast! This is my first big fancy book to be published on a large scale, but writing has always been part of my art practice. About one year after I started saladforpresident.com, publishers and agents started knocking. That motivated me to get going on the proposal process and formalize the concept, which took WAY longer than I expected. It wasn't until I sat down to write the proposal that I realized I didn't really know what the book should be. I spent a good six months ironing that out, writing lots and lots of text that I would never use, but that was really instrumental in distilling my vision for this project book, and later, for finding the right publisher and editor.

Who is your dream interview that you have not yet gotten to do?

Well, Laurie Anderson was certainly my #1 dream interview, so having crossed her off the list, I would have to say Michelle Obama. I know, it's hardly unique... Scratch that. I would rather make salad with Melania. I'd get her to plunge her hands in the soil of that beautiful White House kitchen garden, and show me what she's really made of.

All photos by Laura June Kirsch