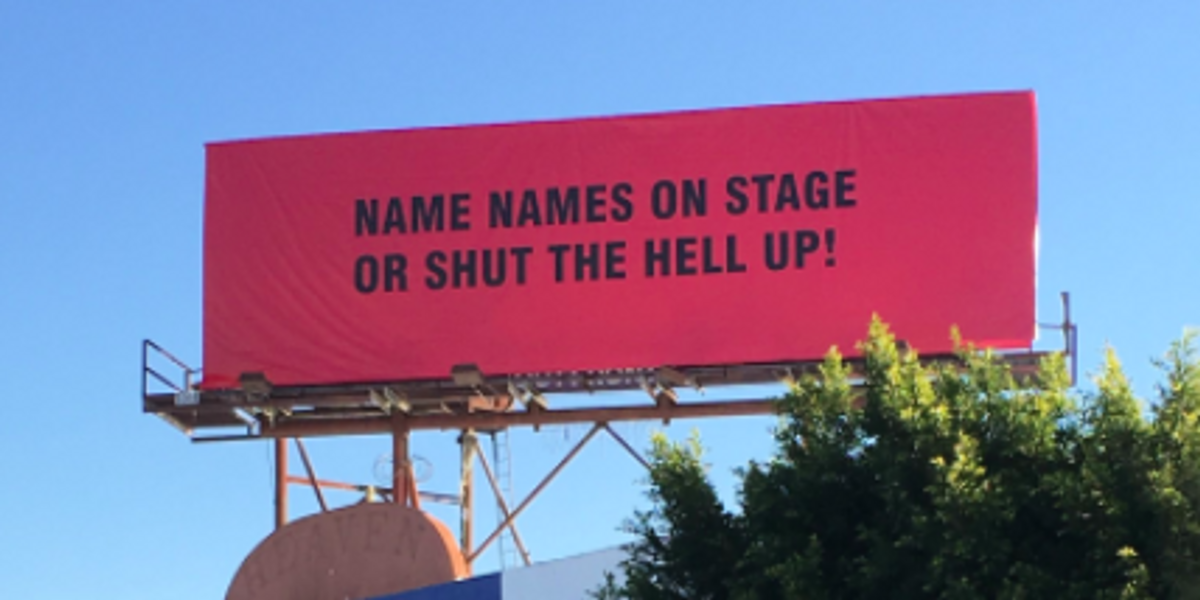 Among the 3,400 seats at this year's Oscars, there is one guest that past Hollywood execs have done their best to silence: a dark and truth filled elephant, as large as the 180,000-square-foot Dolby Theatre itself. The reckoning with Hollywood's acceptance sexual assault and harassment is the underlying tone of this year's Oscars, and something most viewers are hoping the award ceremony will tackle at least in some sense. Activist and street artist Sabo is among many calling for change and acknowledgment before this Sunday's show, though perhaps his methods are more outspoken than most.

In a nod to Oscar-nominated Three Billboards Outside Ebbing, Missouri, Sabo has erected three billboards a few miles from the theater that call on Hollywood's elite to speak up in wake of the #MeToo and #TimesUp movements. The large red billboards read in black bolded text, "Name names on stage or shut the hell up!" "We all knew and still no arrests," "And the Oscar for the biggest pedophile goes to…" The three statements are dualistic in serving their purpose — acting as not only a reminder but also a warning sign to the Academy.

Sabo told Entertainment Weekly, "My ultimate goal for these billboards is that maybe I might break the actors' façade during the [Oscars] show because I know that if they had it their way, they would act as if nothing was going on and nothing happened, and they would have their show and be done with."

Sabo's billboards hopefully will be a wake up call to those in Hollywood who walk alongside the "middle ground" in giving their sympathy for victims while also remaining silent on condemning the perpetrators. As he states, "If these people are truly serious about what they're doing, they will speak out on the Academy Awards stage this Sunday. Instead of putting down Trump during the show, how about you hold your own industry's feet to the fire?"