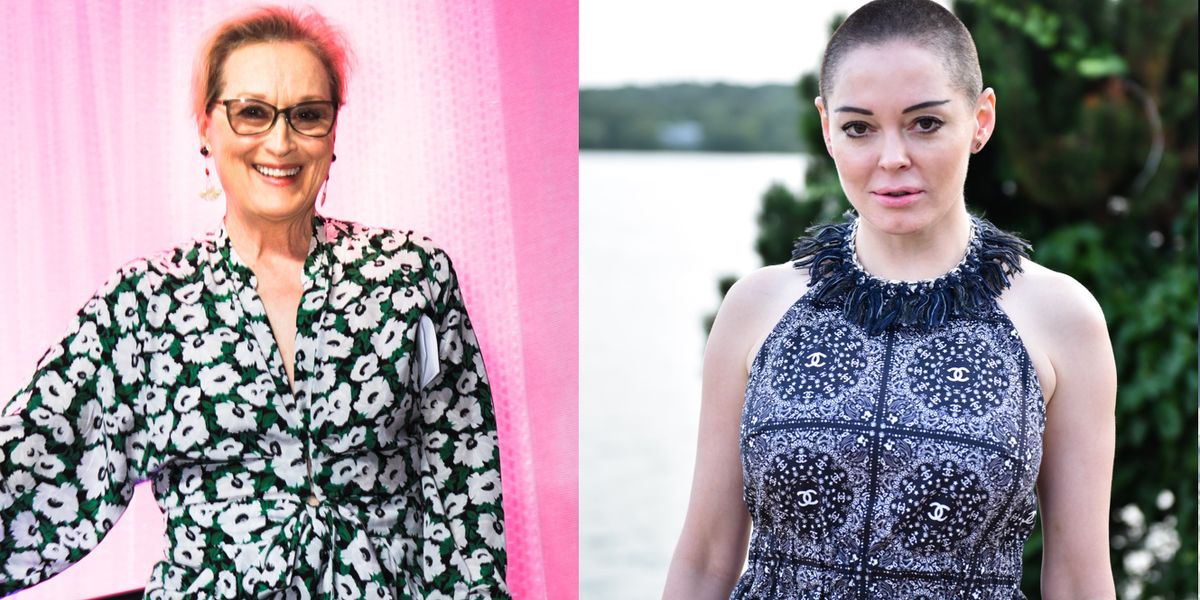 Mega-producer Harvey Weinstein was the subject of an explosive New York Times expose last week that revealed he had made settlements to eight different women who accused him of sexual harassment, among other accusations of inappropriate behavior over decades as one of the most powerful men in Hollywood. Ashley Judd went on the record to speak against Weinstein's inappropriate behavior, and Rose McGowan was mentioned as having received a settlement, though she hasn't shared details of her case (likely due to a non-disclosure agreement).

She did have words for the embattled producer and his company, though, and told The Hollywood Reporter last night that Weinstein's firing wasn't enough. McGowan, who has been outspoken about women's rights for years, also called on the entire board of Weinstein's company to resign in the wake of the scandal, and called out Hollywood's notorious "bro" culture at large. "I'm calling on the board to resign effective immediately," she told THR. "And for other men to stop other men when they are being disgusting."

She added, "Men in Hollywood need to change ASAP. Hollywood's power is dying because society has changed and grown, and yet Hollywood male behavior has not. It is so not a good look. In the way cooler than Hollywood world I live and work in, I am actually embarrassed to be associated with it. The men of Hollywood need to know they own no woman. The days of Entourage-like behavior and thinking is as dated as your largely bro nature."

Veteran Hollywood queen Meryl Streep also gave a statement to the Huffington Post on Weinstein, condemning his acts while emphasizing that she was not aware of the accusations against him (since the NYT report was released, it's been a common refrain that "everyone in Hollywood knew" about Weinstein's behavior). Streep has worked with Weinstein in the past. "The behavior is inexcusable, but the abuse of power familiar," Streep told the Post. "Each brave voice that is raised, heard and credited by our watchdog media will ultimately change the game."

Her full statement is below:

The disgraceful news about Harvey Weinstein has appalled those of us whose work he championed, and those whose good and worthy causes he supported. The intrepid women who raised their voices to expose this abuse are our heroes. One thing can be clarified. Not everybody knew. Harvey supported the work fiercely, was exasperating but respectful with me in our working relationship, and with many others with whom he worked professionally. I didn't know about these other offenses: I did not know about his financial settlements with actresses and colleagues; I did not know about his having meetings in his hotel room, his bathroom, or other inappropriate, coercive acts. And if everybody knew, I don't believe that all the investigative reporters in the entertainment and the hard news media would have neglected for decades to write about it. The behavior is inexcusable, but the abuse of power familiar. Each brave voice that is raised, heard and credited by our watchdog media will ultimately change the game.